Neurofibromatosis type 1 (NF1) is a genetic disease that affects all body systems and is associated with an increased risk of cancer as well as low-grade tumors of the nervous system, including optic pathway gliomas (which form along the optic pathway connecting the eye to the brain) and plexiform neurofibromas (tumors of the peripheral nerves). Plexiform neurofibromas can cause debilitating and even life-threatening  physical problems including pain, disfigurement, weakness, airway dysfunction, visual impairment, and bladder/bowel dysfunction. In some cases, the tumors may even undergo malignant change and become aggressive cancers called malignant peripheral nerve sheath tumors. 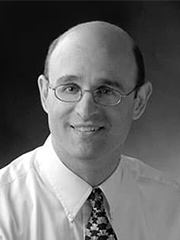 Michael Fisher, MD As many plexiform neurofibromas will never grow or cause symptoms, and given the lack of effective treatments, these tumors are quite challenging to manage. “The problem is, we don’t know which ones will grow,” says Michael Fisher, MD, Director of the Neurofibromatosis Program and Chief of the Neuro-Oncology Section at Children's Hospital of Philadelphia (CHOP). “Predicting which tumors will grow and cause problems will allow us to intervene earlier for these tumors, but also prevent us from treating tumors that don’t need treatment.”

Until recently, the only effective therapy for plexiform neurofibromas was surgical removal. However, because these tumors are invested within the nerve and often surrounding other vital structures such as blood vessels or the airway, only a small percentage of these tumors can be removed without causing irreversible harm. Thus, CHOP has been involved for two decades in clinical trials evaluating chemotherapy and precision medicine approaches for these tumors

In April 2020, this research commitment paid off with the approval by the U.S. Food and Drug Administration of selumetinib (brand name Koselugo) for pediatric patients, 2 years of age and older, with NF1 and symptomatic, inoperable plexiform neurofibromas. CHOP was a site for the highly successful trials that led to FDA approval. Importantly, the new therapy not only shrank the neurofibromas, but also improved patients’ quality of life, for example, by reducing pain or increasing motor function. At CHOP, one 8-year-old girl who participated in the trial had had a tracheostomy tube in place for three years because her tumor was compressing her trachea and causing decreased airway function. After receiving the therapy for one year, her tumor shrank enough that her airway function improved to the point that the tracheostomy tube was no longer needed and was removed.

The success of this trial highlights the forward-thinking research conducted by CHOP’s Neurofibromatosis Program. The program has 29 open clinical research studies that are investigator-initiated, multi-institutional or consortium-based. These studies, as well as  laboratory research at CHOP, are evaluating a number of complications of NF1 including plexiform neurofibromas, optic pathway and other low-grade gliomas, high-grade gliomas, second malignancy risk after treatment for an initial tumor, social competence and autism, and early childhood development in NF1.

This wide range of research being conducted by CHOP’s Neurofibromatosis Program will lead to more game-changing discoveries like selumetinib.