Philadelphia, Aug. 21, 2018 — Researchers who tested two commercially available baby monitors are raising serious concerns about the accuracy of these products, which are marketed to parents, but are not regulated by the U.S. Food & Drug Administration (FDA). 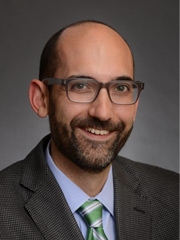 Chris Bonafide, MD, MSCE “We evaluated how accurate these monitors were in detecting low oxygen levels in infants,” said study leader Chris Bonafide, MD, MSCE, a pediatrician and safety expert at Children’s Hospital of Philadelphia (CHOP). “One monitor detected those levels when they occurred, but was inconsistent; the other never detected those levels when they occurred.” The team also evaluated pulse rate accuracy in the babies, and found that the monitor that never detected low oxygen levels also often falsely displayed low pulse rates.

Bonafide and colleagues, including CHOP neonatologist Elizabeth Foglia, MD, MSCE and co-authors from the ECRI Institute, a nonprofit research organization that evaluates medical devices and practices, published a report today in the Journal of the American Medical Association (JAMA).

Last year, the researchers wrote an opinion piece in JAMA raising concerns about consumer use of physiological baby monitors being broadly marketed to parents. They argued that such products may cause undue anxiety to parents, with no evidence of medical benefits for healthy infants. “We previously discussed the consensus in the pediatric community that there is no medical reason to electronically monitor vital signs in healthy babies at home,” said Foglia. “Our new study adds serious concerns about the accuracy of these consumer monitors, when we compared them to a standardized hospital monitor in a cohort of sick infants.”

In the current study, the team studied 30 infants, six months old and younger, hospitalized in CHOP’s Cardiology and General Pediatrics units between July and December 2017. Each baby wore an FDA-approved reference monitor (the Masimo Radical-7) on one foot and a consumer monitor on the other foot.

The consumer monitors were the Owlet Smart Sock2 and the Baby Vida, the only two currently marketed smartphone-integrated consumer baby monitors that use pulse oximetry — a measure of the blood’s oxygen levels. The scientists analyzed hypoxia (low oxygen levels) and bradycardia (slow pulse rate), comparing results between the reference monitor and each consumer monitor.

While testing the Owlet, the reference monitor reported hypoxia in 12 patients, and the Owlet reported at least one simultaneous hypoxia reading in all 12 patients. However, at least once during hypoxia, the Owlet also erroneously indicated that five of those 12 infants had normal oxygen levels. Across all the data points, the Owlet’s overall sensitivity was 88.8 percent—it detected hypoxia, but not consistently. “If something is going wrong with a sick infant, you would want to know that 100 percent of the time,” said Bonafide.

Testing of the Baby Vida monitor showed that none of the 14 infants who experienced hypoxia according to the reference monitor had simultaneous hypoxia readings on Baby Vida—a sensitivity of 0 percent, a serious flaw.  In addition to missing hypoxia, the Baby Vida monitor also falsely displayed bradycardia in 14 patients who had normal pulse rates, a high rate of false positives. “False positives raise the possibility of unintended consequences,” said Foglia. “Parents who see an abnormally low pulse rate reading might call 911, or unnecessarily rush their baby to an emergency department.”

The authors caution that as more vital sign monitors enter a largely unregulated marketplace, physicians and parents need to be aware that these machines may trigger unwarranted alarm.

Funding for this study came from Children’s Hospital of Philadelphia.