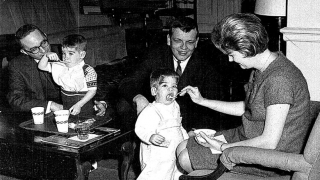 Brad Parkes, at age 4, with Lester Baker, MD; his parents, Sarah and William J. Parkes II; and little brother Greg, at CHOP when it was located on Bainbridge Street in 1966. Most people learn about Children’s Hospital of Philadelphia’s (CHOP) former home on Bainbridge Street in South Philadelphia because they happen past the historical display on the first floor. Not so with Brad Parkes. He was a CHOP patient back in the 1960s. He spent a fair share of time at the Bainbridge building, home to the hospital from 1916 to 1974.

Parkes, now 57, came to CHOP when he was 4, to have his congenital hyperinsulinism (HI) treated by endocrinologist Lester Baker, MD, a nationally recognized pioneer in understanding HI. A lot less was known then about the disease, and fewer treatment options were available. Parkes had a subtotal pancreatectomy to keep his hypoglycemia under control. Dr. Baker felt it was necessary because Parkes’ younger brother, Greg, had several bouts of severe low blood sugar that left him with brain damage.

Research was underway at CHOP and elsewhere in the ’60s. Both brothers participated in early trials of diazoxide, which became the front-line medication for treating HI.

Fast forward 27 years, and Parkes is married to Teresa Saris, who has a healthy daughter, Kristen, at Abington Hospital. In the middle of the first night, 24-hour-old Kristen was unresponsive and needed to be revived. When a doctor checked her blood sugar  level, it was 8 mg/dL (70 to 110 is the normal range for an infant).

“The resident had just completed an endocrinology rotation and asked my mother, ‘Is there a history of low blood sugar in your family?’” Kristen recounts. “She told him, ‘My husband had something as a child.’”

Kristen had inherited that “something,” and was quickly diagnosed with congenital hyperinsulinism. “I was on the phone with Dr. Baker that day,” Brad says. “Two days later, Kristen was transported to CHOP, and Dr. Baker and I had a reunion.”

Much had been learned about HI since her dad’s diagnosis. Advances in diagnosis and treatments meant Kristen was put on diazoxide, the same drug her father had helped prove was safe and effective. It was also determined she didn’t need surgery since her sugar level could be medically controlled.

But diazoxide has side effects, including hypertrichosis (excess hair growth). “I’ve seen pictures, and I was the hairiest little baby,” Kristen says. “People thought I wore a wig!” But her blood sugar was well controlled with medication. “I’ve been lucky. I never had a seizure,” Kristen says. “I saw the challenges my Uncle Greg had, so I knew HI was serious, even though mine was relatively mild because of the success of medical management.”

Charles Stanley, MD, took over Kristen’s care. He had trained under Dr. Baker and took on the mantle of HI leadership, founding the Congenital Hyperinsulinism Center at CHOP in 1998.

“When we’d go to Endocrinology at CHOP, everyone treated dad as if he were someone famous, like Harry Potter,” says Kristen,now 25. “Everyone in Endocrinology knew who he was. Every time we were at CHOP when I was a kid, all the endocrinologists would talk to us. HI was so rare.”

Giving back through research

That rarity of hyperinsulinism — one in about 50,000 births — means fewer research subjects to draw from. Knowing that, the entire Parkes family has participated in studies. When Kristen was 12, she and her older brother B.J., who also has HI but doesn’t require medical management, were enrolled in a study and spent a week at CHOP.

“I was able to go off diazoxide after that,” Kristen says. “It tastes horrible. I said, ‘I’m so done with this.’”

Since then, she has mostly controlled her sugar level with diet and exercise, being hyper aware of how she feels and teaching her friends what a “low” looks like so they can intervene and remind her to eat some high-carbohydrate foods.

“Through high school and college, I would occasionally go low if I hadn’t eaten anything by 1 o’clock. I’d space out and get hazy. My friends would notice and tell me to eat something,” Kristen says. “If I stayed up late studying or got anxious, I’d feel the lows. For me, I feel there’s a connection between stress and blood sugar. I’m also protein sensitive, so if I eat an egg by itself, I’ll go low.”

Kristen also participated in a study as an adult. She spent a month at CHOP participating in a clinical trial directed by Diva De León-Crutchlow, MD, MSCE, who succeeded Dr. Stanley as Director of CHOP’s HI Center and is also Chief of the Division of Endocrinology and Diabetes.

‘I loved my nurses’ 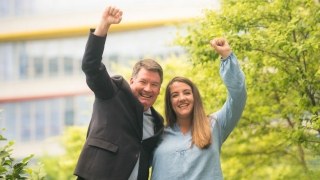 Brad Parkes and his daughter, Kristen Kristen has spent additional time at CHOP — two years as a nurse in its Medical Behavioral Unit. Her career choice was clearly influenced by her childhood experiences. “I remember being in the hospital as a kid,” Kristen says, “and the doctor would come in and use big words, then leave. The nurses stayed all night. I loved my nurses. They were there for me when I was lonely and talked me through the tough times when my parents couldn’t be there.” Kristen is now working elsewhere as a pediatric nurse as she pursues a Master of Psychiatric Mental Health nurse practitioner degree at Drexel University.

“I have so much respect for everyone at CHOP, the people who treated me as a patient and the people I worked with as a nurse,” Kristen says.