Summer 2021 saw the Congenital Hyperinsulinism Center at Children’s Hospital of Philadelphia care for two newborn girls who had the focal form of hyperinsulinism (HI), benefitted from CHOP’s vast experience with 18F-DOPA PET scans — the combined expertise of the performing test itself and interpreting the results — and were cured by partial pancreatectomy.

EA was born via vaginal delivery at 40 weeks gestation in North Carolina. She weighed 3.74 kg at birth, and APGARs were 5 and 8. Her plasma glucose was found to be less than 10 mg/dL shortly after birth. She was started on diazoxide, which was escalated to 15 mg/kg/day. Despite receiving the maximum dose of diazoxide, EA still required IV dextrose, so diazoxide was discontinued. EA was transferred to Children's Hospital of Philadelphia on DOL 22 for evaluation and management of congenital hyperinsulinism (HI).

At the time of transfer, EA required IV dextrose at a GIR of 30 mg/kg/min. She continued to receive oral and NG feeds of breast milk.

After recovering from surgery, EA underwent a cure fast in which she was able to fast 12 hours with plasma glucoses greater than 70 mg/dL and, after total 17 hours of fasting her plasma glucose was 52 mg/dl and her plasma BOHB was 2.1 mmol/L, indicating that she was cured of HI. EA thrilled her parents and medical team by taking all feeds by mouth at the time of discharge.

Going forward, it is recommended EA have yearly screening for pancreatic insufficiency and diabetes since she had a greater-than-50% pancreatectomy. Monitoring developmental milestones is also recommended, as up to 50% of children with HI have neurodevelopmental deficits. 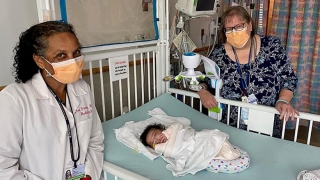 RJ's great outcome was due, in part, to HI Center radiologist Lisa States, MD, and clinical research nurse coordinator Susan Becker, BSN, RN, CCRN. RJ was born via vaginal delivery at 38 weeks gestation, weighing 2.9 kg, with APGARs at 8 and 9. She had a seizure at 18 hours of life, and plasma glucose was found to be 12 mg/dL. RJ was started on diazoxide on DOL 4 and then escalated to 15 mg/kg/day. Despite receiving the maximum dose of diazoxide, she still required IV dextrose. Given her lack of response, diazoxide was discontinued and glucoses were maintained with IV dextrose and a glucagon infusion. RJ was transferred from her birth hospital in California to CHOP on DOL 24 for evaluation and management of congenital hyperinsulinism (HI).

Genetic tests showed RJ had focal hyperinsulinism due to a paternally inherited ABCC8 mutation. Five days after her arrival at CHOP, RJ underwent an 18-F DOPA PET scan, showing a focal lesion in the superior pancreatic head. She underwent a 20% pancreatectomy with resection of a focal lesion in the midportion and deep in the pancreatic head. She recovered quickly and tolerated full feeds.

At discharge, RJ continued to have some oral aversion, which is not uncommon in these cases, and she was receiving enteral feeds of breastmilk via NG tube, however, a short time after discharge, she started taking all her feeds by mouth.

The high volume of children who come to the HI Center means our team has vast experience treating cases of all types. From appropriate testing, to explaining genetic results, to unparalleled expertise in interpreting 18-F DOPA PET scans and performing pancreatomies — CHOP has it covered. Each patient has unique features, and it takes a center with expertise across the spectrum of types of HI and presentations to deliver the best outcomes.