Longtime friends worked together to create an innovative device. Now, one is honoring the other’s legacy. 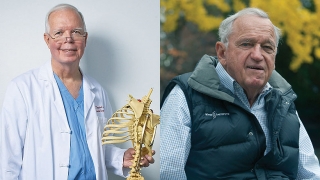 Robert Campbell Jr., MD, (left) and Hansjörg Wyss (right) have saved the lives of thousands of children suffering from a life-threatening spine and chest-wall deformity using a device created by Campbell and produced by Wyss’ company. For three decades, two visionaries collaborated to save the lives of children with rare, life-limiting conditions. A revolutionary gift to Children’s Hospital of Philadelphia honors their friendship and will allow their work to expand beyond saving lives to improving the quality of life for these children.

Their partnership began in the late ‘80s. Robert Campbell Jr., MD, was an orthopaedic surgeon, researcher and inventor who created the initial prototype for a novel device called the vertical expandable prosthetic titanium rod (VEPTR). Campbell believed the device could save the lives of children with thoracic insufficiency syndrome (TIS), a complex spine and chest-wall condition that has devastating effects on breathing and lung growth. Campbell had witnessed children with TIS die because treatments were not available.

But when Campbell tried to turn his idea into reality, manufacturers rejected his invention, saying it was too expensive to develop and produce a device — innovative as it might be — for diseases that affected so few children.

Then Campbell met Hansjörg Wyss, a Swiss businessman, orthopaedic device manufacturer and philanthropist. Wyss saw the lifesaving potential of VEPTR and agreed to manufacture the device even though he knew it would never be profitable for his company.

Over the next 25 years, Campbell and the doctors he trained implanted the VEPTR device — manufactured by Wyss’ company — to save the lives of thousands of children with TIS. VEPTR remains the only FDA-approved device to treat the condition.

In 2008, Campbell was recruited to CHOP to build the Center for Thoracic Insufficiency Syndrome, the first national, multidisciplinary program devoted solely to the treatment of TIS. Since then, thousands of patients have traveled to CHOP for transformative care.

“When Bob [Campbell] passed away in 2018, there was a sense of urgency to continue his legacy,” says John “Jack” Flynn, MD, Chief of the Division of Orthopaedics at CHOP. Leaders at CHOP approached Wyss with a proposal to continue Campbell’s work. Wyss pledged his support and made a substantial donation to fund the newly named Wyss/Campbell Center for Thoracic Insufficiency Syndrome.

“Mr. Wyss’ gift is truly transformational,” Flynn says. “No one else is really working on finding solutions for this group of kids.”

Families from around the world come to CHOP seeking help for their seriously ill children — many of whom would die without intervention. Children like Jonathen, Isla, Madden and Keegan, who were all born with congenital and progressive disorders, have traveled from places as far as Canada and Kuwait to be successfully treated at CHOP using VEPTR.

The Wyss/Campbell Center will continue the innovative work that began in 2016 when CHOP named the Center as one of the hospital’s first Frontier Programs. These multidisciplinary programs receive three years of specialized support to forge important new discoveries, create novel therapies and deliver hope to more families.

“This gift allows us to continue the science that began under CHOP’s Frontier Program: to pull together wildly different fields of science — engineering, cell biology, image processing, informatics and more — to develop new device concepts to treat kids with thoracic insufficiency syndrome and improve outcomes for patients around the world,” says Patrick J. Cahill, MD, who was named the Center’s director after Campbell’s death. “We will improve care for children in both incremental ways and with transformative breakthroughs.”

The Center will support:

“VEPTR made previously lethal conditions survivable,” Flynn says. “Now, we’re working on the next generation of treatment — to help children with survivable conditions have a better quality of life.”

These funds will enable CHOP to increase the number of patients that can be seen, launch new initiatives, enhance collaboration and advance the understanding and treatment of TIS.

CHOP’s TIS team has grown to include more than 40 members spanning multiple specialties and disciplines. They were all trained by Campbell and share his philosophy: to save children’s lives and create a brighter future for them through pioneering clinical care, research and technology development.

“This gift honors our past and supports our future,” Flynn says. “Big ideas take time to develop. Thanks to Mr. Wyss, Dr. Campbell’s ideas will continue to bear fruit and help more children.”