If endocrinologists knew 29 years ago what they know now about congenital hyperinsulinism (HI), Leo Brown’s life most likely would have been different.

When his HI couldn’t be controlled with medication, Brown ended up having a subtotal pancreatectomy. At 19, he was diagnosed with diabetes, a common outcome for those who lost most of their pancreas.

“I probably had focal disease and had a lot of my pancreas removed that I didn’t have to,” says Brown, 28, of Boston. When he was a baby, there weren’t tests to determine the type of HI or, in the case of focal disease, where the lesion was located.

From anger to acceptance

“There were times when I was furious about the whole thing,” Brown admits. “Then I decided to focus on making the decisions I needed to make for myself to stay healthy and moving on to the rest of my life.”

For him, that meant initially taking insulin to control his blood sugar. “But since I was 24, I’ve managed my diabetes with a low-carb diet. My A1C is 6.1 percent,” he says. Diabetes is diagnosed when the A1C (a measure of longer-term sugar levels) is over 6.5 percent.

Brown was one of four young adults who shared their experiences of growing up with HI as part of a panel discussion at the 2016 Congenital Hyperinsulinism Family Conference in Philadelphia.

John Williams, 27, who had a 95 percent pancreatectomy and has been dealing with diabetes since his late teens, went through a tough period of adjustment, too. “I admit I’ve been bummed,” he says. “But you’re dealt the cards you’re dealt. I figured that I made it through the worst part (as a child with dangerous lows), so I can deal with the diabetes.”

How much to tell? 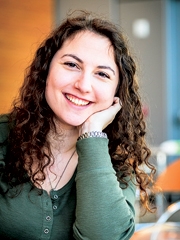 Rianna Sommers, 23, who had diffuse HI and a 98 percent pancreatectomy, is an advocate for being open about her needs around dealing with HI, post-pancreatectomy diabetes and blood sugar fluctuations.

She told her friends about HI and taught them about the symptoms of low blood sugar. “It’s always good to have extra pairs of eyes since sometimes you don’t know when you’re low. My friends would say, ‘Have a juice box now.’ I always had a tub of frosting and juice boxes handy,” she remembers.

It wasn’t always smooth sailing. The girl who was to be her first college roommate requested she be matched with “someone normal.” “Don’t be super disheartened if something like that happens,” Sommers says. “You’ll find a better roommate. In college, I think it’s best to be open because having HI is a big part of who you are. It takes guts to do it.

In college, she used a Section 504 plan, part of the federal Rehabilitation Act that guarantees people with disabilities receive necessary accommodations, “to open up the discussion with professors,” she says. “For example, 7:30 a.m. classes weren’t good for me and eating at 6 p.m. is not a good time. Because of my 504 plan I was able to pick my classes before other students so I could avoid the times when I knew I would crash.”

Does the boss need to know?

Sommers has also informed her employers. “I told my employer right away. If that meant they didn’t want me, then I didn’t want to work there,” she says. “If they know, your workplace can provide accommodations. If I’m having a roller-coaster day, it’s OK for me to work from home.”

Brown’s openness varied over the years. “At 19, I just told people that I ate a different diet, but didn’t say why,” he says. “At that point in my life, my main objective was to be chill and having HI wasn’t chill.”

Katelyn Hart, 24, who has hyperinsulinism/hyperammonemia (HI/HA) syndrome and manages her condition with diazoxide and diet, was a little more subtle about sharing her diagnosis. “When I was student teaching, I told the school nurse,” she says.

Williams says, “My employers have been understanding.”

The sooner children learn about their diagnosis and how to manage their HI, the better, panelists agree.

“As soon as I was old enough to check my own sugar, that was my responsibility,” Hart says.

“I still remember first learning about HI when it was described as ‘PAC-MAN ate up the sugar,’” Sommer says. “It’s really important to learn how to communicate with your doctor on your own.”

Other advice that will go unattributed in deference to parents who were hesitant that it be shared: Consuming alcohol is tricky for people with HI because drinking can cause hypoglycemia. “People don’t know if you’re drunk or have low blood sugar,” says a panelist.

Another thing parents might not feel comfortable talking about, but young adults need to know: If you’re considering having sex, people with HI have to remember that it is also physical exercise. That means they need to prepare — whether it’s adjusting their insulin dose or having snacks ready — as if they were planning a workout at the gym.