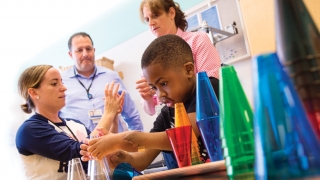 By any measure, 8-year-old Zion Harvey has led an extraordinary life. At the age of 2, he developed sepsis, a life-threatening infection that led to the amputation of his feet and hands. The illness also damaged his kidneys and, two years later, Zion underwent a kidney transplant — receiving an organ donated by his mother, Pattie Ray.

It was a daunting start. But Zion proved to be a dauntless kid. With prosthetic feet, he learned to run, jump and play just like other kids. What he did without hands was even more remarkable: He used his residual limbs to master eating, writing, even playing video games.

Fast-forward to 2012. Zion, then 6, and Pattie went to Shriners Hospitals for Children–Philadelphia to investigate the possibility of prosthetic hands. But Scott Kozin, MD, surgeon and chief of staff at Shriners, had a different and radical suggestion: a double hand transplant.

Kozin referred Zion to the Hand Transplantation Program at The Children’s Hospital of Philadelphia. Led by L. Scott Levin, MD, FACS, the program combines the expertise of CHOP’s Division of Plastic and Reconstructive Surgery and Division of Orthopedics with that of Penn’s Transplant Institute.