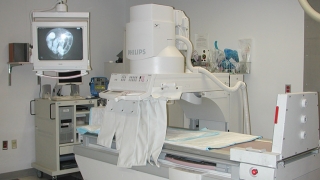 Fluoro tower Fluoroscopy is an imaging technique that uses X-rays to create "real-time" or moving images of the body. It helps doctors see how an organ or body system functions. Fluoroscopy is used in a variety of diagnostic and therapeutic procedures. A radiologist (X-ray doctor) and radiologic technologist perform the procedures together.

Most fluoroscopic exams require the patient to lie on the table. The x-ray machine, called the "fluoro tower", is brought across the patient. The fluoro tower has a curtain on it so the patient feels like he/she is laying in a tent or small car wash.

In many cases the patient is given a contrast material to highlight specific organs and/or blood vessels so they can be seen on an image. Contrast material can be swallowed, injected or given by an enema, depending on the type of exam and what part of the body is being studied.

The radiologist is able to move the fluoro tower around to follow the contrast material wherever where it goes. The patient may be asked to move around in different positions so that we can take pictures of the exact area of interest. The images are then viewed on a television monitor in the room, usually at the head of the x-ray table, so that the doctor, parent and child are able to see.

Note: Parents will be allowed to accompany the child into the exam room, other arrangements should be made for siblings.

Women who are pregnant or may be pregnant will be asked to leave the exam room during the procedure. Please make sure that there is someone else available to accompany the child during the exam, if needed.