Back in September 2012, Nicole Fantozzi got a call from the school nurse. The nurse said 6-year-old Joey seemed pale and run down, and that she thought he might be anemic.

“We aren’t usually quick to run to the doctor, but I did notice he was tired and not himself,” says Nicole.

Within a few days she and Joey’s dad, Joe, were sure he needed to get checked out.

“Joe suggested Joey sit out of flag football practice one Saturday afternoon, but he wanted to play. He got out of breath quickly while he was running, which isn’t normal for him," Nicole says. "Joe was worried and took him to our local hospital that afternoon." 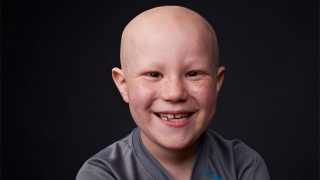 After running a few tests, the ER doctor said Joey’s symptoms could be caused by one of many things: mononucleosis, a blood disorder, or maybe leukemia. He said Joey needed to be taken to a hospital that could diagnose him. By 3 p.m., at the recommendation of doctors and friends, the family made the decision to head to The Children’s Hospital of Philadelphia (CHOP).

The ambulance arrived at their hospital in the Poconos in northeastern Pennsylvania at 6 p.m. and Joey was in the Emergency Department at CHOP three hours later.

By midnight, an oncologist had confirmed Joey had leukemia.

“It was like something you see in a soap opera,” says Nicole. “We were called into a room and the oncologist sat us down to explain what all this meant. We asked all the questions we could and by the time we left the meeting we knew there was a cure. We were certain he would be OK.”

Joey was moved to an inpatient room, and when he woke up Sunday morning, Nicole and Joe told him what was happening.

“We explained that he had ‘bad blood’ in his body and we needed to replace it with good blood,” says Nicole. “I was waiting for him to ask me the tough questions — ‘Am I going to die? What is going to happen to me?’ But Joey never asked them, and he didn’t cry. He took it all in stride.”

Joey was in the hospital for 27 days, and endured daily chemotherapy, several transfusions and painful spinal taps. His family made it their mission to keep everything as normal, positive and cheerful as possible. Joey never complained or cried. He learned to swallow pills, and decided his motto would be, “I’m awesome.”

He made it easy for everyone to keep smiling.

“About three weeks into his treatment we talked to Joey about losing his hair,” says Nicole. “Instead of it falling out slowly we planned a shave-your-head party. We invited family and friends to the hospital to shave their heads alongside Joey.”

Even Joey’s 15-year-old sister, Kyra, shaved a patch of hair on the back of her head to show her support.

The end of Joey’s hospital stay was the beginning of a 3½ year treatment plan. Though Philadelphia is a 2½ hour trip from their home, Joey’s family decided to continue his treatment at CHOP.

“For a while we thought about treating Joey somewhere closer to home, but we were so happy with the doctors and nurses at CHOP that we knew we wanted to keep him there,” Nicole says.

At first it was weekly trips back to CHOP’s Specialty Care Center in King of Prussia for chemotherapy. From February to April 2013, Joey had to go to the Hospital every two weeks and stay from Wednesday through Saturday. Then there were radiation treatments.

With nearly one year of treatment behind him, Joey is doing wonderfully.

“One of the other mothers in baseball didn’t even know he had cancer — he was at baseball practice every day just like the other kids — nothing got him down,” Nicole says “He played baseball during the spring, just came back from summer camp last week. There’s no leukemia left in him — we don’t look at him as a sick child.”

Joey will celebrate how far he’s come in the past year in a special way. He’s been named one of 10 patient ambassadors for the Parkway Run & Walk, and has formed Team Joey — a group of family and friends who will raise money for pediatric cancer research and survivorship programs at The Children’s Hospital of Philadelphia.

They’ll walk and run together on Sunday, Sept. 29, 2013, celebrating childhood cancer heroes, and raising awareness of the funding needed to find new treatments.

"Over the past year we’ve asked ourselves, ‘Why did this happen to us? Why did this strike my family?’ And I think it’s because Joey’s such a strong kid,” Nicole says. “He can take this. Not everyone could. We’ve learned so much having gone through this, and if we can help other people by participating in this event, that’s what we want to do.”

Go to Joey’s Facebook page for updates, and donate to his Parkway Run & Walk team.

Philanthropic gifts to the Cancer Center are vital to making breakthrough stories like Joey's a reality. With your help, we can provide innovative care, pioneering treatments and lifesaving cures to children … tomorrow and for years to come.