The tile mosaic hanging in Carly Stephens’s room is a reminder of the most difficult time of her life — nine months in treatment for leukemia.

It’s also a reminder of what was good: the visits from the art therapist, the nurses who were like sisters, the support of her family and friends.

It’s been more than two years since Carly, now 17, walked into The Children’s Hospital of Philadelphia (CHOP) with her parents — sent there by her pediatrician after a battery of tests. 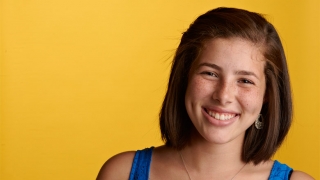 The family went into a quiet meeting with a team of specialists. Carly cried as she heard the diagnosis, but was able to stay calm, reassured by the doctors.

“Right away they said it was curable,” she recalls.

For Carly’s sake, her parents, Suzanne and Bob, also tried to be calm. “We were on another planet,” Suzanne recalls. “You feel like your world is going to end. But in the same breath you’re also like, ‘Thank God we’re at CHOP.’”

CHOP was a familiar place — their youngest son had had surgery and follow-up care for cleft palate at CHOP 12 years previous to Carly's cancer diagnosis. “Knowing you’re an hour away from the best of the best, it puts you at ease as much as you can be during that horrible time,” Suzanne says.

The doctors told Carly and her family that her cancer, acute myelogenous leukemia, would require nine months of chemotherapy. She was admitted to CHOP right away, and stayed six weeks for the first phase of treatment. Both parents, Suzanne and Bob, stayed with her the whole time, sleeping on an air mattress and couch in her room.

In addition to her oncologists, Richard Aplenc, MD, PhD, and Lori Ehrlich, MD, PhD, Carly was under the care of a team of nurses, nurse practitioners, social workers, school tutors, art therapists and more. From the very beginning, the CHOP team provided crucial support, in many different ways.

“Two days into it, she’s sleeping, it's 4 o’clock in the morning and you’re staring at your child in bed, bawling your eyes out,” Suzanne recalls. “I went out into the hallway and I’m leaning there, and the nurses came up, dropped everything, sat and talked to me. They were like family.”

Support from nurses and doctors

“All of my nurses were awesome,” Carly says. “They were like my older sisters. I don’t have any sisters. They helped me with anything and gave me advice.”

The doctors and nurse practitioners, in morning rounds on the oncology unit, tried to visit Carly last, knowing she was a late sleeper. They were also respectful of her age and maturity.

“They said, ‘You’re 15 and you’re going to be part of this process,’” Suzanne recalls. “They were so respectful to her and to Bob and me. No question was a stupid question.”

Carly struggled through the effects of chemotherapy: nausea, shaking, eyelids so dry her corneas were scratched, and hair loss.

“She was so positive,” Suzanne says. “That’s the way she is. She never once complained. Never, never, never.”

“Losing my hair was my least favorite part,” Carly says. “I had long brown hair with tints of red and blond. Losing it was kind of sad. We tried to make jokes out of it.”

Skyping with her older brother from the hospital, Carly reached up and pulled out a huge chunk of hair.

Her brothers got buzz cuts. Some of her friends shaved their heads.

At her family’s home in New Hope, PA, the support was incredible. Family and friends stayed with Carly’s brothers as her parents spent nights at CHOP. A friend created an Internet site to provide food — 60 people responded. They put a cooler on the family’s porch.

“You’d come home at whatever time of night and there would be soup, salad, entrée in the cooler,” Suzanne says. “Everything. For almost a whole year. Never missed a meal. It was incredible.”

Keeping up with school despite chemo

Carly went through four more rounds of chemotherapy, each requiring one month as an inpatient. She returned home for two weeks between each round, always going back to school to the extent her health allowed — sometimes just visiting for lunch.

With the help of the teachers on staff at CHOP, who visited for an hour every day, she was able to keep up with schoolwork. “I stayed with everything,” Carly recalls. She studied in bed and completed all her homework, faxing it in or sending it in with her brothers.

Carly looked forward to Thursdays because that was when the art therapist visited with a cart of supplies, including tiles for the mosaic that now hangs in her bedroom.

Bouncing back to her life

In the spring of 2011, her sophomore year, Carly finished chemo.

“I was relieved and excited to go back and start over and see how everything was at home,” she remembers.

“She bounced right back into it,” her mom says. “She started playing volleyball again, and lacrosse, she’s babysitting, she got a job. She’s captain of the volleyball team. She got her license.”

This year Carly is a senior, looking at colleges. “I’m right where I should be,” Carly says. She continues follow-up care with her team at CHOP, with an appointment every four months.

This bright, energetic teenager will receive careful care from her team at CHOP for years to come, as she continues to live life to the fullest.

“When I left the hospital I was nervous. I hadn’t been in the real world in a while,” she says. “But I realized it gets better. Things go back to normal eventually. You’ll be able to look back on it and be done with it.”

Breakthrough stories like Carly's are made possible, in part, thanks to generous donations to the Cancer Center. With your support, we can provide innovative care, pioneering treatments and lifesaving cures to more children — today, tomorrow and for years to come.