Rory was born with a rare liver condition that caused poor growth, a heart defect, severe itching and potentially life-threatening liver failure. Doctors near the family’s home in Norfolk, Va., treated him with medicines and stents placed in the blood vessels in his heart, which helped. But a liver transplant performed at Children's Hospital of Philadelphia (CHOP) transformed his life — and changed him from a toddler with little interest in food to one who gobbles down pizza.

Rory was born weighing 6 pounds, which put him on the smaller side, but this did not seem concerning. A birth weight on the lower end “runs in our family,” says his mother, Amanda. As is common with newborns, whose livers can’t always excrete bilirubin properly at first, he was given a test that measured how much bilirubin was in his blood. Bilirubin is a yellow substance that’s made during the normal process of breaking down red blood cells, and the liver changes the bilirubin so that it can be excreted from the body. Rory’s bilirubin level was fine. 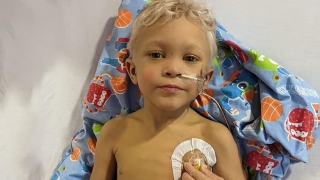 Because of Rory’s small size, his pediatrician wanted to check him again three days after his birth. The doctor noted that Rory looked jaundiced, meaning a yellowing of the skin and eyes. “I hadn’t noticed anything was wrong,” says Amanda. Looking back, she’s surprised that neither she nor Rory’s father, Tomas, noticed, because when she now sees photos of newborn Rory, the yellow tone of his skin is obvious. “I’d just given birth. We hadn’t gone anywhere. I guess we have terrible lighting in our house!”

At the pediatrician’s visit, Rory’s bilirubin level was checked again — and it was very high. “I was not even home from the appointment when I got a call that the hospital has a bed waiting, and ‘You need to go right now,’” Amanda recalls.

The usual treatment to decrease bilirubin didn’t work for Rory. During a monthlong stay in the hospital, he underwent multiple tests and a liver biopsy. But it was a chance encounter that helped lead to a diagnosis. A geneticist overheard a group of med students discussing Rory’s case. The geneticist thought Rory could have Alagille syndrome, which is a rare condition that can be difficult to diagnose because the symptoms can vary widely. “The geneticist said that it’s not something that a lot of people know about,” Amanda says. “She said, ‘Let’s test for it.’ If it wasn’t for her overhearing, I don’t know how long we would have waited. In my Alagille support groups, I hear about a diagnosis taking a long time. Once you know what you’re dealing with, you can start treatment.”

Bile build-up, and many other complications

Alagille syndrome can be inherited or, as in Rory’s case, can result from a random gene mutation. It causes bile to build up in the liver because there are too few bile ducts to drain the bile. Bile helps remove waste from the body and helps break down fat. A build-up of bile results in liver damage and eventual liver failure. Alagille syndrome can also affect the heart, eyes, bones, kidneys and other organs. Growth failure and malnutrition are common in children with Alagille syndrome, due to the inability to absorb fat from the liver and/or the pancreas and insufficient calorie intake.

Rory was put on a specific formula to help him absorb fat. “We kept trying different formulas to get him to gain as much weight as he could,” explains Amanda. He never showed much interest in food. When he was 5 months old, he was given a feeding tube to increase his calorie intake, and then he started early-intervention feeding therapy.

Another issue Rory faced was that the bile build-up in his blood caused an itching sensation across his body. “I would tell the doctor that we’re finally at a good place with these meds for the itching, and that would jinx it every time, and it would get bad again,” Amanda says. “It was the biggest issue, symptom-wise.”

And finally, the Alagille syndrome caused a heart defect called pulmonary artery stenosis, meaning that the valve between Rory’s heart and the artery that takes blood to the lungs didn’t work correctly. To compensate, the heart needed to work harder to pump enough blood through the valve.

‘CHOP has a lot of experience’

Amanda and Thomas began looking at hospitals near Norfolk that could perform the liver transplant that Rory needed to live a normal life. But even when they found an experienced team they felt comfortable with, there was concerned about Rory’s heart defect. “They told us, ‘CHOP is great at this. They have a lot of experience with this,’” says Amanda.

The family first came to CHOP’s Pediatric Liver Transplant Program in March 2021, when Rory was 2, for a liver evaluation. Rory was put on the national waitlist for a liver donor. The family returned to CHOP in June and December for follow-up visits with Elizabeth Rand, MD, the Medical Director of CHOP's Liver Transplant Program. Three days after the December visit, the family got a phone call: There was a liver available for Rory. 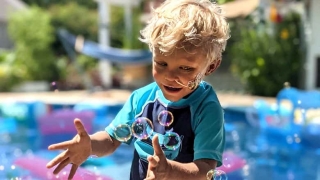 The seven-hour transplant surgery went smoothly, and Rory now has a liver with adequate bile ducts. “It’s been almost textbook-perfect,” says Amanda with awe. “He’s asking for things to eat he had never asked for before, and actually eating them!” Some current favorite foods include pizza, strawberries, and barbecue chips dipped in ketchup.

To ensure his body doesn’t reject the new organ, Rory needs to be on multiple medications. Some of these, such as steroids, are slowly getting reduced. Overall, he’s thriving. He loves his big toy truck that he can sit in and drive, and he shows off his surgery scar whenever he can. “Nothing in his life has ever been this easy,” says Amanda. “It’s incredible.”