Jack was 3 years old, full of energy and looking forward to becoming a big brother when he was diagnosed with acute lymphoblastic leukemia. Now, a year and many visits to the hospital later, Jack is on maintenance treatment, and he and his new sibling, Jude, have developed “the perfect brother love/rivalry type of thing,” according to their dad, Brad. 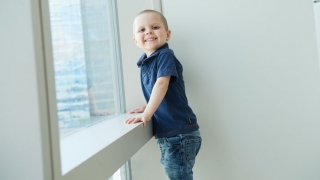 Summer 2018 had arrived in Philadelphia and with it, seasonal allergies. That’s why Brad didn’t worry when his son Jack started to snore at night. But when he and his wife, Katie, noticed swelling around Jack’s neck and groin, they made an appointment with their pediatrician.

Brad was wrapping up at work before the Fourth of July holiday when Katie texted him from the pediatrician’s office. “You might need to come here. They seem concerned,” she wrote.

Less than 15 minutes later, the family was at Children’s Hospital of Philadelphia (CHOP) for a blood workup and X-rays. When the results came back, pediatric oncologist Charles Phillips, MD, MSHP, gently told Katie and Brad that their son had leukemia. Jack would be admitted to the hospital immediately to determine the type and the course of treatment.

Stunned, Brad drove home to pack clothes and supplies for his family. A violent thunderstorm had blown through, staining the sky orange. A rainbow stood out against the clouds. Determined to stay positive, Brad texted Katie, “Even the darkest storm can have a rainbow at the end.”

More information and a plan

During his first week inpatient, Jack underwent more tests and procedures. Before receiving a chemotherapy port, child life specialists demonstrated how it works using a “Jack-size” doll and a stuffed duck with its very own chemo port.

“The detail around this place is amazing,” Brad wrote in the journal he kept that week.

With the results of Jack’s bone marrow biopsy,  pediatric oncologist Andrea Flynn, MD, sat down with Brad and Katie. Jack had acute lymphoblastic leukemia (ALL), the most common form of childhood leukemia, Dr. Flynn told them. Richard Aplenc, MD, PhD, MSCE, would lead Jack’s care. The treatment would span three years and include chemotherapy, blood transfusions and lumbar punctures.

After the meeting, the family packed up their things and drove the short distance home, where they began to process this new journey they were taking. 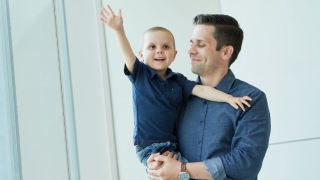 Brad and Katie’s baby was due in less than two months, and the family was living in a temporary residence while undertaking a massive home renovation. Their local friends, neighbors and community stepped up as their support team. Both of their families live out of state, so their mothers took turns flying in for lengthy stays, which was a saving grace once the family welcomed Jude to the clan in late August. Jack got the nickname “Super Jack,” and the feisty toddler lived up to that name at the oncology clinic.

CHOP became a second home for the boys, who left their mark on the team. Staff members quickly learned how to make Jack comfortable, since he is never reluctant to share his feelings. Child life specialists indulged his creativity with the “Jar of Jack,” a container packed with pipe cleaners, puff balls and other craft supplies.

Nurses became adept at hiding blood transfusion tubes and distracting Jack with books and art projects. They had little tricks for keeping him calm when they accessed his port, a scary process for little ones.

“Those little custom things make a difference,” Brad says. “The nurses — I’m constantly amazed by them. I don’t know how they can have such incredible empathy and such incredible knowledge.”

Brad and Katie also learned how to manage their son’s care at home. Jack dislikes liquid medication and is too young to swallow pills. Over time, Katie and Brad learned to make a game of it. They crush up his pills and mix them with pancake syrup. Brad walks out of the room and comically warns his son not to take his medicine until he comes back. Then Katie urges him to quickly swallow it, so Jack can proudly proclaim to his father that he took his medicine.

“Nowadays he has up to 10 pills a day to take, so this was an important discovery,” Brad says. “Early on it was a battle with tears for hours every morning and night. I dreaded waking up because I knew it had to happen. Now it’s part of our routine.”

The right place for Jack

The past year has had rough patches. Jack temporarily stopped walking, threw up often and lost his hair due to his treatment. He has been hospitalized five times for fevers and transfusion reactions, once for 12 days. When this happens, Katie stays with Jack during the day and Brad spends the night in his hospital room. The logistics could be tough. If Brad or Katie’s mother wasn’t visiting during a hospital stay, keeping both boys entertained in the hospital required juggling and creativity. “Thankfully, Katie has a knack for that,” says Brad. Scavenger hunts, dance parties, hopscotch, carwashes in the tub and even a piñata were employed to keep things positive.

Now Jack is on the maintenance phase of his treatment and has plenty of opportunities to just be a kid. He takes a gymnastics class and loves to spend time outdoors, but also enjoys quieter pastimes, like reading, building with blocks and working on art projects. In the kitchen, he plays sous chef to his dad, helping him prepare meals. And Jack is back in preschool where staff have learned about ALL from Jack’s healthcare team at CHOP.

Before Jack’s diagnosis, Katie recalls looking at CHOP’s Main Campus, a 15-minute walk from their home, and feel fortunate to live so close while hoping to never need CHOP’s services. After spending days and weeks at a time there — with Jack always preferring to get there by walking — they’re deeply familiar with what CHOP offers.

“Every person, from the check-in team to the specialists, has treated us with incredible empathy and has made us feel special. Everyone knows our names and seems to love Jack and Jude as much as we do,” Brad says. “When all of this began, our parents checked to make sure we were in the right spot.

The resounding response was there couldn’t be any better place for him in the world.”