When she was 8, Marina’s family moved from Egypt to the United States to get the best care for her kidney condition. She received a kidney transplant at Children’s Hospital of Philadelphia (CHOP), with her father as the donor. Today, Marina is in college. She hopes to become a doctor, inspired by the care she received at CHOP. 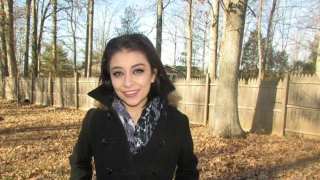 When Marina was 4, she started to show signs of illness. She grew thin, her belly became swollen, and she was constantly tired. Her parents, Naglaa and Essam, took her to the doctor. An ultrasound showed problems with her kidney, and an MRI confirmed the diagnosis. Marina had polycystic kidney disease, a condition in which the kidney is laced with fluid-filled cysts, reducing the organ’s ability to process waste from the bloodstream.

From Egypt to the United States

The family lived in Egypt at the time. Their doctors told them Marina would need a kidney transplant, but that she was too young for the operation. They treated her with medication to reduce the fluid and waste build-up in her body.

Marina continued treatment in Egypt until she was 8, when the family moved to the United States to seek better options for her care. The priest at their church knew a priest in Pennsylvania who suggested that they move to the Philadelphia area in order to get care at Children’s Hospital of Philadelphia (CHOP). Naglaa and Essam obtained a visa and settled in Norristown with Marina and her two younger sisters.

Soon after they moved, Marina became sick and ended up in the emergency room at CHOP.

“The people there were very helpful. They did blood work and an ultrasound and made an appointment for us to see a nephrologist,” remembers Naglaa.

Tests showed that Marina’s problems were not limited to her kidneys. She also had a problem with her liver and an enlarged spleen. Her medical team at CHOP included a nephrologist for her kidney disease and gastroenterologist, David Piccoli, MD, for her liver. In the years that followed, her medical team expanded to include nephrologists, Kevin E. Meyers, MBBCh, and Bernard Kaplan, MD.

Her doctors adjusted her medication and discussed long-term plans for Marina’s treatment. They agreed with the doctors in Egypt that she would need a transplant, and that she could wait until she was older. The kidneys were her most critical problem, but her liver was also a concern.

Polycystic kidney disease is a genetic disorder characterized by the growth of numerous cysts filled with fluid in the kidneys.

Over the next few years, with regular visits to CHOP, Marina continued with medication. Despite frequent belly pain and headaches, she was able to keep up with her school work and make new friends. Her school was understanding about her needs, and gave her extra time and sometimes tutoring when her health got in the way.

Marina’s kidney function deteriorated over time, even with regular adjustments to her medications. In her teenage years, she was experiencing more pain. The time for transplant was approaching. Family members were tested as potential donors, and her father was found to be a match.

When she was 16, Marina met with transplant surgeon Matthew Levine, MD, who evaluated her in preparation for her kidney transplant. Because her kidneys were so enlarged with the cysts from her condition, it would need to be a two-phase procedure. First, her failing kidneys would be removed and their function taken over by dialysis. Then, three or four months later, she would have the transplant to receive a new kidney.

Marina had her kidneys removed and was able to continue at school with dialysis treatments three or four times a week until she was ready for the transplant procedure. On the day of the transplant, Essam had one of his kidneys removed at the Hospital of the University of Pennsylvania (HUP). Across the street at CHOP, Dr. Levine then transplanted the kidney into Marina.

“I was scared going in for the transplant,” says Marina.

“But more excited. After it was done, I felt better right away. I had more energy.”

She had some lingering pain, but that eventually dwindled away.

A bright future ahead

Marina may still require a liver transplant, but she is feeling better now than she ever did in the 17 years before she received her father’s kidney. At 19, she is in her second year of college, where she is studying pre-medicine. Inspired by Dr. Kaplan, she would like to become a pediatrician or a nephrologist.

“Dr. Kaplan looked after me as a person,” she says. “I wasn’t just a patient to him.”