Gideon defied the odds by surviving his first few weeks with significant lung and kidney problems. A year ago, he received a kidney transplant, with his father as a donor. Now, he is a happy, active and sociable 3-year-old. 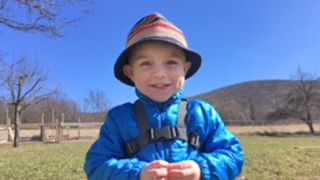 When Sarah went in for her 32-week ultrasound, she wasn’t expecting anything unusual. She and her husband, Dan, had two young sons already and knew their third child would also be a boy. But the scan showed something was wrong. The baby’s kidneys were enlarged and bright-looking in the images. She was sent for additional imaging at a nearby hospital for a more precise diagnosis.

Over the next few days, she underwent more ultrasounds to look carefully at her baby’s organs. They showed, in addition to having enlarged kidneys, his lungs were abnormally small. The amniotic fluid surrounding him was also low, a sign of reduced kidney function.

Polycystic kidney disease is a genetic disorder characterized by the growth of numerous cysts filled with fluid in the kidneys.

Sarah and Dan were told their baby would probably not survive. He had a genetic condition called autosomal recessive polycystic kidney disease (ARPKD), which is characterized by the growth of cysts in the kidneys, and sometimes includes problems with other organs. The condition affects different people in different ways, but their baby’s case, with underdeveloped lungs in addition to kidney cysts, was severe.

The couple planned for delivery at a hospital in Allentown, PA, but they also planned for their baby’s funeral. “I cried for those next five weeks,” says Sarah.

A ray of hope came from a doctor they met within those final weeks of pregnancy. A neonatologist said he knew of a doctor at Children’s Hospital of Philadelphia (CHOP) who had expertise in treating children with ARPKD. He contacted Bernard Kaplan, MD, at CHOP, who agreed to consult on the baby’s care at birth.

Sarah was induced to deliver at 37 weeks when her amniotic fluid had dropped to a dangerously low level. Gideon screamed and cried when he was born, so vigorously he ruptured both lungs and air escaped into his chest cavity. His first medical treatment was to extract the leaked air from his chest and seal the tear in his lungs, and to help his lungs expand by having him inhale a surfactant.

“None of us expected him to survive,” says Sarah. He had very high blood pressure and was not breathing well. He was on a ventilator for his lungs and medications to help his kidneys function.

After three weeks, Gideon was still alive, and his medical team started to express confidence he would make it. A week later, he was able to breathe without supplemental oxygen.

Getting specialized newborn care at CHOP

At a month old, Gideon was released from the hospital in Allentown, but not to go home. Sarah and Dan drove him straight to CHOP, where they met Dr. Kaplan for the first time. They knew he had been advising on Gideon’s care but had never spoken with him.

“We were so thankful every day Gideon was breathing — remembering we had picked out his casket,” Sarah says, “We were so thankful to have Dr. Kaplan guiding his care, someone who had dedicated his life to treating conditions like this. One of the first things he said was, ‘How are you?’ I couldn’t even begin to tell him.”

Dr. Kaplan briefed the couple on the disease, that its course was unpredictable. He explained how they would treat the key problems Gideon was facing: his breathing, high blood pressure, along with toxicity from poor kidney function.

Gideon stayed at CHOP for two days, during which he had X-rays, ultrasounds and bloodwork, and Sarah and Dan met with different specialists who would play a role in his care. Then, they finally brought him home.

Raising a newborn with a genetic condition

“It was a crazy, tense time.” He was on 22 different medications, many of which had to be given twice a day. His belly was very swollen. “He looked like a teeny baby with a basketball in his belly,” Sarah remembers.

Feeding was a challenge. He threw up frequently and was barely getting the nutrition he needed. He gained no weight between 2 and 5 months, so his doctors at CHOP decided to place a G-tube.

Gideon was still far from a healthy baby. He had been classified as failure to thrive. With his big belly, he couldn’t roll over, sit up or crawl. He was finally able to walk at 1 ½ years, with awkward balance because of the extra weight in his middle.

Sometimes fathers give more than love

Sarah and Dan both knew that Gideon would need a kidney transplant, possibly more than one as he grew older, and that he might need a liver transplant as well. They were both tested, and both were found to be good matches. Dan decided to go first when Gideon needed it.

In the summer when he was 3, Gideon’s kidney function declined to the point where he needed the transplant. He was experiencing kidney failure.

The first thing Sarah noticed after the surgery was the change in Gideon’s coloring. His skin had had a yellowish grey cast before the transplant. Now it had the same color as his two older brothers. By the third day after the surgery, Gideon was able to sit up and move around. By day 10, he was up and walking.

From kidney transplant to walking to running 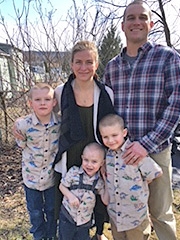 “We’ve been surprised and amazed at how strong he has grown,” says Sarah. “He quickly went from walking to running. When he sees his older brothers do something, he wants to do it too. He’s very physical.” Sometimes his parents wish he was a little less physical, as his balance hasn’t quite caught up with his energy and strength. They have him wear a helmet for some activities, and sometime a life jacket too, to protect him when he falls.

At 3 1/2, Gideon is a busy, happy little boy. He loves being outside. He’s fascinated by animals, especially big ones, like bears, tigers and elephants. His parents have decorated his room with pictures of animals, and sometimes add a trip to the zoo when they take him to CHOP. He loves people, too. “Every person he meets is a new best friend,” says Sarah.

He returns to CHOP for regular follow-up visits with his nephrology team and is being monitored by other specialists as well. Frequent ear infections led to ear tubes, for example, and a recent sleep study has shown mild sleep apnea, which may require treatment.

“We are so thankful we are here,” says Sarah.

“With doctors who are so professional and so dedicated. We couldn’t be in a better place. They call Gideon the Catch-22 kid, because he’s the exception to every rule. We are amazed and grateful that God has allowed us to have him this long.”