Shortly after she was born, Dallas was diagnosed with sickle cell disease. For the first few years of her life, every time she had a fever, her parents would rush her to an emergency room. While she never needed to be admitted to a hospital, her parents could not imagine a life of constant fear and uncertainty. They came to Children's Hospital of Philadelphia (CHOP) to learn about curative treatment options. With her brother as her donor, Dallas underwent a successful bone marrow transplant. 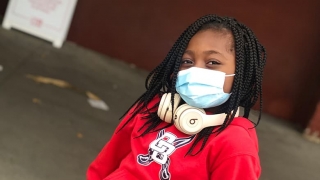 When 7-year-old Dallas was born, her platelet count was low. Two tests for sickle cell disease had conflicting results, but a third test confirmed the diagnosis. She started being seen every three months by a hematologist in Brooklyn, where the family lived at the time.

“A college friend’s mom had sickle cell, so I had heard from my friend about the option of bone marrow transplant,” explains Dallas’ mother, Romelda. “When I mentioned it to the hematologist, he said it’s only done if there are frequent pain crises. This was 2013, so the procedure was probably not common then.” Understanding that Dallas’ sickle cell disease was their reality, the family focused on learning how to manage it. In patients with the disease, red blood cells do not correctly produce hemoglobin, the protein that moves oxygen around the body, and the red blood cells become hard and misshapen. Those with the disease can experience episodes of pain, infections, potential organ damage and often early death.

Whenever Dallas got a fever, she needed to go to the emergency room to make sure she did not have a life-threatening infection. People with sickle cell disease, especially children, are at risk for serious bacterial infections because the sickle-shaped red blood cells damage the spleen, which helps filter bacteria out of the blood. Luckily each time Dallas had a fever, it was caused by something common, like a cold. “She never needed to be hospitalized, so I was grateful for that,” says Romelda. But the family had a looming anxiety that one day Dallas would have a serious health scare.

When Dallas was 3, the family moved to New Jersey and found a new local hematologist. “He advised us about CHOP,” says Romelda. “He said there are a lot of exciting things with research for sickle cell, and it’s no longer a requirement to have frequent crises to do a bone marrow transplant.” To understand their options, they met with Timothy Olson, MD, PhD, Medical Director of CHOP’s Blood and Marrow Transplant Program. With her older brother, Daniel, as a matched donor, Dallas successfully underwent a bone marrow transplant, and she remains, in Romelda’s words, “happy, brave and outgoing.”

What stood out to you about CHOP’s care?

“CHOP provided a sense of comfort,” says Romelda. “They were well versed in everything. Every time we had a question, they were able to respond, and there were no promises, but they gave us 100% truth, good or bad. I felt I could trust them with my daughter’s life.”

Was it difficult to decide to undergo BMT?

“My husband and I went back and forth whether to do it,” explains Romelda. “But ultimately, the constant fear that something bad could happen one day and our trust in God helped us make the decision to see it through. We wanted to provide the opportunity for Dallas not to live in constant fear. My college roommate’s mother passed away from complications of sickle cell. She went through a lot, and envisioning my child’s future, I did not want that for her. It also helped when I did online research and found support groups to read about other people’s experience. I messaged two moms to get their insight.”

What advice would you give a family in the same situation?

“Go with your instinct. Once you make the decision to move forward, trust the process. Yes, there will be bumps along the way, but see it through.”

How was the BMT process? 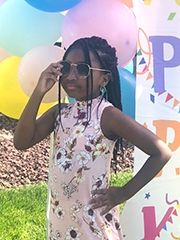 “Daniel was nervous,” Romelda recalls. “He was concerned at first how it would affect him and his sister — just scared of the unknown. He was 8. We talked about it as a family. We told him, ‘You’re giving your sister a gift no one else can give her.’ That helped, and to this day he says to her, ‘I’m your superhero.’ They call themselves twins and say, ‘We have the same blood now.’ Dallas was very brave through it all. One day, the chemo caused her to throw up blood. I was crying, and she said, ‘Mommy, don’t cry, I’m OK.’ She never showed signs of weakness. The hardest part for her was losing her hair. She’s a girly girl, and that was the only time she was sad throughout the entire process.”

How was her recovery?

“Dallas didn’t have any complications. Her recovery went really well!”