Normally it would be very bad news if a patient had no pulse. Yet the 11-year-old girl in CHOP’s Cardiac Center was not unconscious, or even in distress. She was, in fact, energetically performing a set of 50 lunges, having just finished a one-mile run on the treadmill.

The story of Allison Carcella, like Allison herself, is remarkable.

Allison was diagnosed with a serious heart problem at just 9 weeks of age. What seemed like a simple cough turned out to be dilated cardiomyopathy, a condition in which the heart’s pumping chambers become enlarged and weakened. Although the diagnosis was potentially life-threatening and the Carcellas knew a transplant might someday be necessary, under the care of CHOP cardiologists, Allison maintained a normal, active life for the next 10 years.

But in late 2013, everything changed. Allison began feeling lethargic and unwell, vomiting frequently. Tests at her local emergency room showed alarming results: Her heart was in trouble. She was rushed by ambulance to CHOP. Over the next several weeks, cardiologist Joseph Rossano, MD, and the Heart Failure team worked to stabilize her condition. But despite their best efforts, Allison’s heart was failing. The team made a difficult decision: Allison would be listed for a heart transplant.

Allison’s parents, Gina and Chris, knew how dangerous the waiting period for a donor heart can be. Patients requiring a heart transplant are, by definition, very sick. Many don’t survive the wait, which can be months or even years.

Waiting for a heart

To improve their odds of surviving to transplant, patients can receive ventricular assist devices (VADs). Implanted in a patient’s heart, the VAD takes blood from a lower chamber and helps pump it throughout the body, just as a normal heart would, improving overall health and buying time in the agonizing wait for a donor match.

But until now, these complicated machines had been bulky and cumbersome, and they brought an increased risk of bleeding and stroke. As a result, children with VADs typically had to remain in the hospital to be closely monitored. At a time that’s already stressful, the enforced hospital stay can weigh heavily on a patient’s spirits.

Allison was lucky. Just as she was listed for transplant, the team at CHOP was preparing to try for the first time a new, smaller VAD called HeartWare. Originally designed for adults, the device is powered by a lightweight pack that can be carried in a small shoulder bag and connects to the patient by a thin wire through the ribs. Tall for her age, Allison was just large enough to become CHOP’s first HeartWare patient.

On March 7, 2014, cardiothoracic surgeon J. William Gaynor, MD, implanted the device in Allison’s left ventricle. Several weeks later, she became the first CHOP patient to go home from the hospital with a VAD to await her transplant. Since then, three more patients have received a HeartWare device.

“To have her home was amazing,” says Gina. “Physically, she felt so good.”

Along with freedom, HeartWare gave Allison something else: strength. So effective was the device at compensating for her failing heart that she was able to embark on a rigorous rehab regimen, carefully supervised by the CHOP team. She regularly headed to the Cardiovascular Exercise Physiology Laboratory to walk (and later run) on the treadmill, burn through sets of squats and lunges, and lift weights. Allison would go into her transplant surgery in the best shape of her life.

And then there was the fun part: Because HeartWare circulated her blood continuously, Allison’s heart didn’t need to pump. As a result, she had no measurable pulse — providing an opportunity to play tricks when unsuspecting nurses tried to take her vital signs.

After 86 days with the HeartWare device, the call Allison and her family so desperately hoped for came: a suitable donor heart was available.

Just hours later, she was in surgery at CHOP. As Rossano notes, “She sailed through her transplant,” and had one of the shortest postoperative stays of any transplant recipient.

Now a busy sixth-grader, Allison divides her time between online school and a performing arts program, and enjoys spending time with her siblings, Angela, Brandon and Tyler.

“I feel great,” she says. She also feels more fashionable. During her 86 days with the HeartWare VAD, she had to wear two-piece outfits to accommodate the device’s wiring. Now, says Allison, “I wear dresses because I can!”

Looking back, Gina and Chris know how lucky they were: “We were able to wait for the perfect heart and have Allison at home, knowing the CHOP team was there for her, for us — it was huge.”

Philanthropic gifts to the Cardiac Center are vital to making breakthrough stories like Allison's a reality. With your support, we can provide innovative care, pioneering treatments and lifesaving cures to more children — today, tomorrow and for years to come. 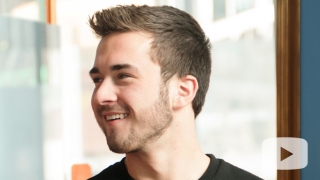 Reid was diagnosed with hypertrophic cardiomyopathy shortly after he was born and had a defibrillator implanted at age 12. Watch his story.