Joe, 18, is a skilled high school athlete. He’s so fast on the soccer field, his coach refers to him as “the blur.” Watching him play, you’d never know that the heart pumping in his chest is not his own.

One morning in June 2015, Joe woke up struggling to breathe. His father, Peter, rushed him to the emergency room at their local hospital near East Pennsboro, PA. An X-ray showed that his heart was enlarged, and his condition was life-threatening. A medevac helicopter brought him to Children’s Hospital of Philadelphia (CHOP).

At CHOP, Joe was diagnosed with a dilated form of left ventricular non-compaction cardiomyopathy, a condition in which the heart muscle becomes thickened, and in Joe’s case, enlarged. This impacts the heart’s ability to pump oxygenated blood through the body efficiently. It can also cause irregular heartbeat and heart failure, which can lead to sudden death. His complex condition would be managed by a team of surgeons, cardiologists, intensivists, nurses, physical therapists and more.

Joe had felt like a healthy teenager just the day before. But his diagnosis wasn’t a complete shock. Cardiomyopathy may run in families. Joe’s mother had a serious heart condition and was on the waiting list for a heart transplant. Two of his three siblings also have heart problems, though neither are as serious.

Joe’s condition was critical, and he needed medical intervention immediately. An implantable cardioverter defibrillator (ICD) was placed in his heart to maintain a regular heartbeat and a left ventricular assistive device (LVAD) was inserted in his chest. An LVAD is a mechanical pump that helps a weakened heart pump blood.

The devices stabilized Joe’s condition. Joseph Rossano, MD, MS, FAAP, FAAC, the Executive Director of the Cardiac Center and Medical Director of the Heart Failure and Transplant Program at CHOP, explained that the ICD and LVAD would keep him alive, but that if his health didn’t improve, he would also need a heart transplant.

A few months later, a heart became available for Joe’s mother. She had her transplant in September 2015. But in the weeks that followed, her health declined as her body rejected the transplanted organ.

Peter describes that emotional time. “There was Joe, a 16-year-old boy with an LVAD in his heart to keep him alive. And then you see him standing at the bedside of his mother who had just gone through her own surgery and was fighting for her life.”

Sadly, that November, Joe’s mother passed away surrounded by her loved ones. Two months later, Joe found out he would also need a heart transplant.

Joe was placed on the list to receive a heart, and the ICD and LVAD kept him alive as he waited for a match. “It bothered me,” says Joe, while waiting on the transplant wait list. “My mom had a great sense of humor and she cared for us all. I would think, ‘Is this the way I’m going to end up?’ I got really scared.”

His turn came in February 2016, when the family got the call that a donor heart was available. They quickly loaded into the car and made the two-hour drive to CHOP. Joe went into surgery late that night, as his father and siblings anxiously waited for news. Christopher Mascio, MD, Cardiothoracic Surgeon, came out early the next morning and told the family that the transplant was complete and had gone well.

Joe would be fine. More than fine. Once the initial pain of the surgery was past, he was up and moving. The first efforts were exhausting. Walking to the bathroom was a feat, and he would get tired just changing his clothes. But with physical therapy and the help of a trainer, he made steady progress. 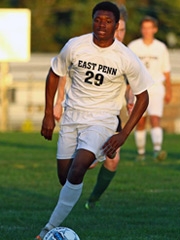 That August, six months after the transplant, Joe stunned his soccer coach when he showed up for the first day of practice – he was medically cleared to play. Joe tired quickly in early practice sessions, but by the first scrimmage of the season, he was running well. He scored two goals in that game. By the middle of the season, he was back in the starting lineup, and “the blur” had returned.

In an interview for CBS Philly, Joe’s soccer coach, Rich, shared his amazement at what Joe accomplished. “For him to come back and do what he’s done is an amazing feat. In terms of his playing ability and fitness, it’s miraculous.”

His father is impressed, too, but for different reasons. “He gives me strength. People say to me, ‘Oh Peter, you must be so strong to have dealt with this, the loss of your wife and raising four children.’ I got most of that from Joseph. I believe in my heavenly father. But when I watch Joseph go through everything he went through and handle it the way he did, that was the source of strength for me.”

Now a senior in high school, Joe comes back to CHOP on a regular basis for checkups since his operation. His new heart, for which he takes immunosuppression medications every day, continues to do well. Joe’s still playing soccer, and he’s looking forward to attending college.

“That team at chop, the whole team, they are the best in the world. joseph was not just another case for them. they treated him like their own child.”