Even though Cate was born 10 days past her due date, her birth was normal with no complications. She appeared to be the typical bouncing, baby girl at 8 lbs. 8 oz. Then, in the hospital, Cate couldn’t coordinate breathing and feeding while breastfeeding. This issue delayed her discharge and Cate stayed an additional week in the “well baby” nursery. During that time, she underwent an electroencephalogram (EEG) and a brain ultrasound, neither of which indicated an issue. After an evaluation, a developmental specialist suggested she re-evaluate Cate at 3 months of age — just to check her milestones. Cate then was discharged. 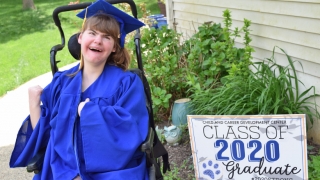 Over the next several months, everything seemed fine to Cate’s parents, Christa and Tripp. But at the three-month follow-up visit, the developmental specialist noticed Cate’s head circumference hadn’t increased and she wasn’t meeting any of the typical milestones for her age. Most importantly, she wasn’t able to visually track — or follow — a moving object. Eye tracking difficulties often indicate a brain disorder.

That discovery began a diagnostic odyssey that would end up lasting 20 years.

A cause left unanswered

Cate began Early Intervention services at 3 months of age, as her physicians tried to determine what was going on. An MRI indicated that something was wrong with the anatomy of her brain. When she was around 2 years old, she began having seizures. Her doctors began to suspect there may be a genetic cause to her condition.

Cate was Christa and Tripp’s first child, and they had hoped to have more children. If there was a genetic cause for Cate’s condition, it could mean an increased chance that future children would have the condition as well. But without a specific genetic diagnosis, the exact chances were unknown.

“That can cause families a lot of turmoil,” says Christa.

In the absence of a clear diagnosis, the developmental specialist connected the family with a neurology nurse at Children’s Hospital of Philadelphia (CHOP) who runs a support group for families. Some of the families in the group have a diagnosis for their children and some don’t. What they all have in common was their children require total care.

“Finding those families early on is what helped us navigate through the different transitions in Cate’s life,” says Christa of the support group. “Here were people doing what we were doing, and some had teenagers when Cate was a baby.” Eventually, Christa met a family whose son hadn’t received a genetic diagnosis until he was 21. That gave her hope that there might still be answers for Cate.

“In your head, you have to resign yourself to the fact that you might never know,” says Christa. “We had accepted the road that we have with Cate. But in our heart of hearts, we knew it had to be something genetic.”

Harnessing the power of genetic testing

When Cate turned 20, the family revisited genetic testing one last time at CHOP, before Cate would transition to adult specialists. It had been 10 years since Cate had last been genetically tested. Since then, whole exome sequencing — a technology that analyzes the coding regions of all 20,000 genes at once — had emerged.

The Epilepsy Neurogenetics Initiative (ENGIN) integrates genetic testing into the diagnosis and individualized care of children with epilepsy.

After consultation with Dr. Goldberg, Cate underwent the whole exome sequencing test, which found the answer the family had been seeking for the past 20 years: a genetic cause for her disabilities. Cate has a mutation in the gene NAA10, which causes a rare genetic form of developmental delay and epilepsy called NAA10 Deficiency Syndrome. This recently identified genetic condition is incredibly rare. The testing indicated that the NAA10 mutation occurred spontaneously, or de novo, in Cate and was not passed on from her parents.

While establishing a genetic diagnosis won’t alter Cate’s long-term prognosis or care, it has been life-changing for her family. When Cate turned 4 years old, Christa and Tripp had taken the chance and had another child. Learning that Cate’s condition was de novo meant there was no risk for Cate’s younger sister to have the condition or pass it on to any children she may have. It “was like a weight lifted off of me,” says Christa.

The genetic diagnosis also confirmed that there was nothing that Christa or Tripp did to cause Cate’s developmental differences or epilepsy.

“We were so happy,” says Christa. “As a parent, you think it is your fault. That’s a really rough piece for parents of a child where there’s no answer. You turn it on yourself. Knowing we didn’t pass it to her and cause it in any way, it was a relief."

“I never ever thought that we would know. I am just happy that they were so supportive at CHOP. Once she became an adult, I don’t know if I would have revisited genetic testing options.” 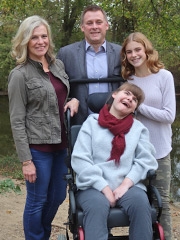 “We can now act as a resource for families who have children with the condition,” says Christa. “If you can make one person’s experience in the special needs world easier or provide them tips and tricks, that’s what we have always been about. 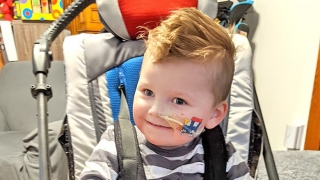