Eleven years after receiving lifesaving care at CHOP and Pennsylvania Hospital, one N/IICU patient returns to say thank you

Published on Dec 17, 2018 in Neonatology Update

One morning in June, 11-year-old Antonio Lombardi burst into tears at the breakfast table. “I need to meet the doctor who saved me,” he told his mom, Heather. 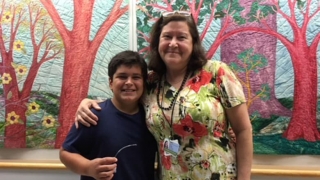 Antonio visiting with Dr. Lioy 11 years after he underwent lifesaving care. Two months later, Antonio and his family arrived in the Harriet and Ronald Lassin Newborn/Infant Intensive Care Unit (N/IICU) to meet with neonatologist Janet Lioy, MD, and share memories of the amazing team that worked together to save his life more than a decade ago.

From birth to CHOP

Antonio was born at Pennsylvania Hospital on Jan. 23, 2007. Right away, his mother knew something was wrong.

“When they handed him to me in recovery, he wouldn’t nurse, and he was making a strange sound,” says Heather. “I said to my husband, ‘Get the nurse, something’s not right.’ They took Antonio away, and I didn’t hold him again for two weeks.”

After running some tests, the team at Pennsylvania Hospital told Heather and her husband, Anthony, that their son had primary pulmonary hypertension and patent ductus arteriosus. He also had pneumonia.

Antonio was placed on a ventilator and transferred to CHOP’s N/IICU. He was heavily sedated, and the team told his parents he would likely need to be placed on extracorporeal membrane oxygenation (ECMO). But Dr. Lioy had another idea. Antonio was a large baby — 9 ½ pounds — so she suggested using a larger ventilator tube. Dr. Lioy and her team performed the procedure very carefully, knowing that high-risk procedures may cause stress and make things worse. Dr. Lioy stayed by the bedside all night, and as Antonio’s lung function improved she was able to reassure the family that ECMO wouldn’t be needed. Antonio’s condition improved quickly, and two weeks later, he was taken off the ventilator.

In late February, Antonio was transferred back to Pennsylvania Hospital, where doctors planned to wean him off his morphine IV before sending him home. But when CHOP cardiologist Stanford Ewing, MD, who was working closely with the Pennsylvania Hospital team, listened to his heart, he could tell that Antonio’s PDA hadn’t closed.

Antonio was transferred back to CHOP, where cardiothoracic surgeon J. William Gaynor, MD, performed a PDA ligation. After a short stay in the Evelyn and Daniel M. Tabas Cardiac Intensive Care Unit, he went home. He was a little over a month old.

Today, “Antonio is a regular boy,” says his dad. He plays football and lacrosse and loves skateboarding, swimming, and fishing. He has mild asthma, but is otherwise healthy. He currently attends Voorhees Middle School and is planning on doing a report on his Children’s Hospital experience to teach others about the miracles of medicine.

When Heather and Anthony look back at Antonio’s time in the N/IICU, they remember some of the challenges — but they also have very fond memories of the team that made their stay easier.

“The doctors and nurses were very inclusive,” Heather says. “I always felt included in all of the discussions.” The team was also supportive of her decision to breastfeed, and encouraged her and Anthony to call anytime with questions. “We used to call at 3 o’clock in the morning!” she remembers.

“We’re grateful to have the opportunity to come back and show him the amazing place where he started out,” she adds. “His illness was the hardest thing we ever went through, and we’re so grateful for the outcome.”