Lauren always figured that someday she and her husband, Chris, would travel to Philadelphia with their son, Gage, so he could see where he spent the first five weeks of his life. When Gage was 10, that opportunity presented itself in the form of an invitation to participate in a research study. 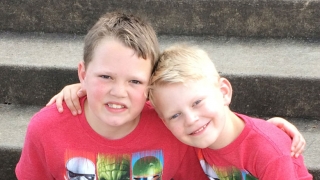 Before Gage was born, he was diagnosed with congenital diaphragmatic hernia (CDH). His family traveled from their home in Georgia to seek expert care at Children’s Hospital of Philadelphia (CHOP), where he was born in the Garbose Family Special Delivery Unit (SDU) and had surgery just days later.

Now, the family is doing what they can to help other kids like Gage by participating in research studying the long-term outcomes of children who have received care at CHOP for a diagnosis of congenital diaphragmatic hernia, lung lesion or giant omphalocele.

Lauren and Chris were excitedly awaiting the arrival of their first child when an ultrasound revealed congenital diaphragmatic hernia (CDH). The baby’s stomach and intestines had migrated into his chest through a hole in his diaphragm muscle.

The condition can limit lung development and cause a variety of other complications. Every tiny detail matters when it comes to the delivery and treatment of a baby born with CDH. Expert surgical and neonatal care are especially important, so delivering within a children’s hospital equipped to provide all of the specialized care the baby may need is critical to avoid the need for transport.

Their doctor referred the couple to CHOP, which had recently opened the SDU, the world’s first birth facility in a pediatric hospital specifically designed for healthy mothers carrying babies with known birth defects.

In addition to the SDU, the family learned about CHOP’s Neonatal Surgical Team. This unique team consists of neonatologists, pediatric surgeons, surgical advanced practice nurses, neonatal surgical nurses, and respiratory therapists who are experienced in providing the delicate care babies with CDH need immediately after delivery. With each delivery, they are on standby in an adjacent room, ready to stabilize your baby and provide any specialized breathing assistance before preparing your child for surgery and additional treatment.

After learning about the CHOP team’s experience caring for babies with CDH, Lauren and Chris made the decision to relocate to Philadelphia for Gage’s birth. Five days after he was born, Gage’s CDH was repaired. The couple and Lauren’s mother stayed at the nearby Ronald McDonald House in Philadelphia while Gage recovered from the surgery.

Families being cared for at CHOP have a variety of support services available to them to help make the experience as easy as possible. Our team can help with everything from lodging to insurance questions and more. 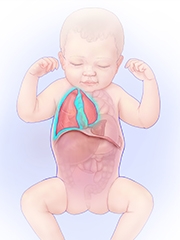 When abdominal organs move into the chest, they can crowd the heart and lungs, and keep the lungs (highlighted) from growing normally. Children born with CDH often have underdeveloped lungs (pulmonary hypoplasia) — a result of the lungs being crowded during development when the abdominal organs migrate into the chest. CHOP’s Pulmonary Hypoplasia Program provides multidisciplinary, long-term care to children with pulmonary hypoplasia and other related complications. Before leaving CHOP, Gage’s care team included specialists from surgery, pulmonology, cardiology and occupational therapy, among others, who worked together to prepare him to go home.

A month after surgery, Gage was healthy enough to return to Georgia. His local doctors coordinated with the team at CHOP to take over his care at home and connect him with a local pulmonologist who could provide follow-up care close to home.

Gage thrived, growing into a boy who loves animals, bugs, superheroes and his little brother, Carter. During free time, he’s likely to be reading a book or exploring the nearby woods and creeks. He’s off the growth charts in both height and weight and is seldom sick.

With the exception of a few breathing treatments around age 2, Gage’s lungs have been healthy. He stopped seeing the lung specialist several years ago. Around that time, he asked his mother about the scar across his belly. She told him about the hole in his diaphragm.

“He said, ‘I was born broken?’” Lauren remembers. She assured him that he was perfect, but that he needed some help from the doctors at CHOP. Gage isn’t self-conscious about his scar and in fact takes pride in it. He tells friends that his surgeons used a light saber.

Revisiting CHOP to help other kids with CDH

Gage has some anxiety, particularly around medical appointments. So when the invitation came to participate in the research study at CHOP, Lauren and Chris called the study coordinator for details.

While the Pulmonary Hypoplasia Program team actively gathers data on the children they treat, little is known about long-term outcomes as the children grow. The study, led by principal investigator Holly L. Hedrick, MD, attending pediatric and fetal surgeon and Director of the Pulmonary Hypoplasia Program at CHOP, aims to assess the long-term neurodevelopmental, cardiac, pulmonary and quality of life outcomes in children aged 8 to 13.

Gage was worried about being stuck with a needle for a blood draw. But his parents explained that his participation would help other children with CDH. 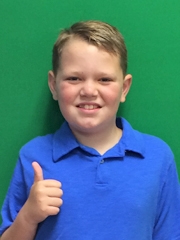 “He’s the kid who always finds the underdog, or if there’s a kid who doesn’t have anybody to play with, he plays with them,” Lauren says. “So to him, it was kind of like, that’s what you do. Someone needs help, you help them.”

Gage tolerated the blood draw and the family made the most of their visit to Philadelphia, seeing the Liberty Bell and other historic sights. For his mother, the trip back to CHOP was an emotional experience. The Harriet and Ronald Lassin Newborn/Infant Intensive Care Unit (N/IICU), the SDU and the Ronald McDonald House where she stayed a decade ago all seemed unchanged.

“You walk through each of these places, reliving it in your head, then you look over at this kid who’s huge and healthy and is 10,” she says of revisiting CHOP with Gage. “It was surreal.” 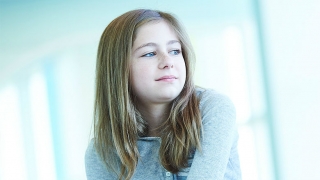 The PHP is studying the long-term outcomes of children ages 8 to 13 who have received care at CHOP for a diagnosis of CDH, lung lesion, or giant omphalocele.