Harper was born with a rare defect in her right collarbone. What should have been a single bone was two. Surgery at Children’s Hospital of Philadelphia (CHOP) connected them. Today, Harper is a thriving, active toddler who loves to run, climb and shoot hoops.

When Harper was 6 months old, her parents, Meghan and Michael, noticed a bump on her collarbone, just below her right shoulder. Over the next few weeks, the bump grew more pronounced, and Harper’s pediatrician recommended she get an X-ray.

The doctor who reviewed the X-ray images told the couple that Harper had a broken collarbone (or clavicle), the long horizontal bone that acts as a support between the shoulder blade and the sternum, or breastbone. The family was directed to take Harper to the local emergency room for treatment. But the symptoms didn’t seem to fit with the diagnosis. Harper did not appear to be in pain, and had no issues moving her right arm and shoulder. She was crawling normally, and could use both arms to pull herself up to stand.

Meghan and Michael brought Harper to the Division of Orthopaedics at Children’s Hospital of Philadelphia for an examination by orthopaedic surgeon Apurva Shah, MD. Dr. Shah has expertise in pediatric upper extremity disorders. 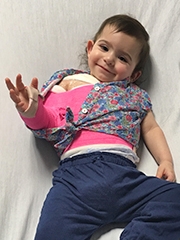 Pseudoarthrosis means “false joint,” and the condition occurs when what should be a single bone develops as two, and the body does not work to join them. In pseudoarthrosis of the clavicle, the outer portion of the collarbone (the end that rests on the shoulder blade) is separated from the central portion (the end that rests on the breastbone). Where the central portion ends, the bone tends to protrude, and a bump is visible. Over time, the bump can become more pronounced and the shoulder can fall forward, both of which can be a cosmetic concern for children and their families. Some children with this condition develop weakness and pain, which can impact shoulder function and sports participation.

Dr. Shah explained that the two sections of the collarbone could be joined surgically. He said the family could wait to see if Harper developed pain or weakness at an older age or proceed with surgery sooner to avoid pain or dysfunction in the future. He also explained that performing the surgery while Harper was young had potential advantages given the unique bone healing potential of young children. After considering the options, Meghan and Michael agreed to move forward with Harper’s surgery.

Two bones into one

Dr. Shah performed the procedure when Harper was just over a year old. During the operation, he joined the two sections of the clavicle using strong suture and cancellous bone graft, small pieces of bone taken from Harper’s hip. To protect the newly united collarbone, Harper was put in a half-body cast. The cast wrapped around her chest and held her upper arm against her torso.

Harper was in the Hospital for just one night. During her stay, Meghan and Michael were trained in how to change her diaper and bathe her while she was in the cast.

The cast stayed on for the next five weeks, a challenging period for Harper’s parents. “We had to be right with her always,” says Meghan. “The cast was as heavy as she was, and it made her top heavy. She couldn’t sit up by herself. She needed to be propped up. She couldn’t crawl. She couldn’t play. She had to be carried everywhere. She did manage to walk in the cast if we held her left hand.”

But pictures from that time show a happy, if constrained, toddler. Harper adapted and accepted the restrictions of the cast.

X-rays taken five weeks after surgery showed that the procedure was a clear success. The outer and central portions of the collarbone had united into a single bone.  As soon as the cast came off, Harper quickly resumed her active life. In fact, when her arm was freed as the cast was being removed, she immediately held it straight over her head. She had two physical therapy sessions, but didn’t really need them. “She took it slow for a week or two,” says Meghan. “She started crawling right away, but for the first few days she didn’t put weight on her right arm.” Then she was off and running. 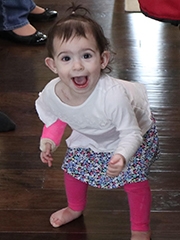 Dr. Shah is optimistic about Harper’s future. “I have every expectation that Harper will continue to do well after undergoing this challenging operation. Her collarbone is now solid and stable, and I anticipate that she will have full shoulder function in the future. She is blessed with two loving parents that have supported her through this difficult process, while also raising her twin sister.”

“She’s a character,” says Meghan of Harper today. “She’s smart as a whip and super outgoing. She loves books. She loves to climb and to run. She shoots basketballs in a kids’ hoop.”

Looking back on Harper’s medical treatment, Meghan says, “Dr. Shah is amazing. I have never felt more comfortable with a doctor. Harper is scared of other doctors, but Dr. Shah could poke and prod her and she’d be fine. He’s good with all of us. He’s like family.”