Considering their family’s history of inflammatory bowel disease (IBD), Fiona’s mother, Alison, was always keenly attuned to her daughter’s health. Fiona had stomach-related complaints from a young age, but it wasn’t until she was 11 that she got what Alison calls “the dreaded diagnosis” of Crohn’s. Now, instead of eating regular food, Fiona gets most of her calories by drinking a formula that is nutritionally complete.

As a young child, Fiona often complained that her stomach hurt, and she had stomach viruses more often than her siblings. “When she was 9 years old, she had what I thought were a few stomach viruses back to back and lost about 7 pounds in one month,” Alison remembers. The symptoms worried Alison, who herself has IBD, as did her grandfather.

More worry, then a diagnosis

Fiona’s pediatrician, knowing this family history, ordered the standard IBD bloodwork. It came back normal. The worry seemed unfounded, considering that Fiona gained some weight back — that is until her well visit when she was 11 years old, when it was discovered she had lost about 10 pounds from the previous year and had hardly grown any taller. “We were told to come back in three months for a weight check, and she was down another 7 pounds,” says Alison. Again, bloodwork was ordered. This time, the results were abnormal.

At this point, they turned to Children's Hospital of Philadelphia (CHOP) and were seen by Betsy Maxwell, MD, MS, a gastroenterologist with the Center for Pediatric Inflammatory Bowel Disease. A colonoscopy confirmed the diagnosis of Crohn’s disease, and Fiona also underwent a magnetic resonance enterography, an imaging test that shows detailed pictures of the small intestine.

Biologic treatment was offered, “But we have opted for enteral nutritional therapy,” explains Alison. Fiona, now 12, gets 80 percent of her calories through the nutrition-rich formula. “She drinks the liquid four times a day. I don’t know how she does it.” Indeed, sometimes the formula is delivered through a feeding tube via the nose into the stomach, especially for young children who wouldn’t tolerate drinking the same thing every meal. “I look online,” says Alison, “and I read so many stories of ‘I can’t do this anymore!’ It’s so monotonous. But she’s doing it, and it’s working wonderfully.” Fiona’s parents, Alison and Shannon, along with her physician are amazed and proud of Fiona’s strict adherence to nutritional therapy.

That means Fiona can enjoy her favorite things without worrying about her IBD symptoms. She loves animals — the family has two dogs, Domino and Matilda, and a four-colored cat named Bambi — and she thinks about becoming a veterinarian. She plays the flute, takes dance and art classes, and enjoys basketball. Knowing how IBD can be an unpredictable journey, Fiona’s parents are happy about their daughter’s progress but remain vigilant: “We take it appointment to appointment.” 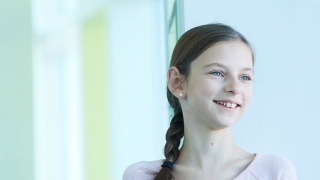