What is Crohn’s disease

Crohn's disease belongs to a group of conditions known as inflammatory bowel disease (IBD).  Crohn’s disease is characterized by a chronic inflammatory process most commonly affecting the end of the small bowel (terminal ileum) and colon.  It may affect any part of the gastrointestinal (GI) tract, from the mouth to the anus, extending through one or more layers of the intestinal wall. Crohn’s disease may appear in “patches,” affecting one area of the GI tract and not the next. 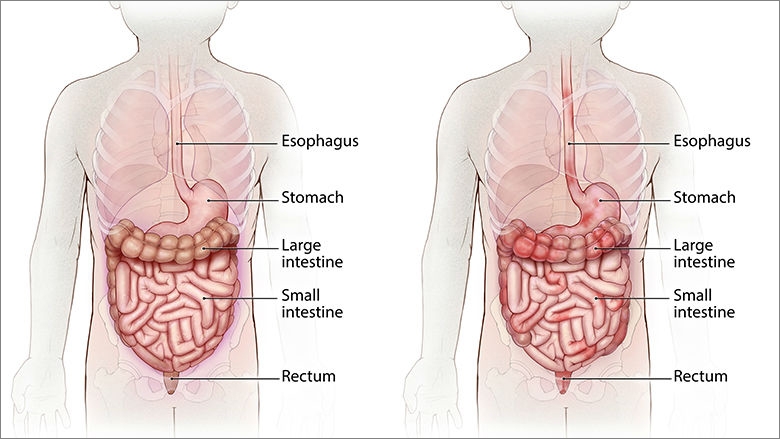 Left: Normal GI Tract. Right: GI Tract with Crohn’s Disease.
In Crohn’s disease, an inflammatory reaction targets the body’s healthy cells, thus signaling the body’s immune system to attack them.  This results in inflammation that can significantly affect a child’s quality of life.

The prevalence of Crohn's disease appears to be increasing, particularly in Western Europe and North America, and it may affect as many as 780,000 Americans.  Crohn’s disease is more prevalent among adolescents and young adults between the ages of 15-35, affecting males and females equally, however this disease is becoming more common in younger children.

Similar to other inflammatory diseases, the exact cause of Crohn’s disease is unknown, but research suggests that genetic, immunologic, and environmental factors are involved. Foreign substances (antigens) in the environment may directly cause inflammation, or they may “trigger” the body's defenses to produce inflammation that does not subside.

Once the immune system in a child with Crohn’s disease is “switched on”, it may not know how to properly "switch off." As a result, the inflammation damages the tissues causing the symptoms of Crohn’s disease.

Signs and symptoms of Crohn’s disease

Crohn’s disease can affect any part of the GI tract.  While the clinical signs of Crohn’s disease can vary from child to child, some symptoms may be more common than others. Symptoms related to inflammation in the GI tract may include abdominal pain, diarrhea, blood in the stool, an urgent need to move bowels, and weight loss. Some children may experience less common symptoms, including skin rashes, joint pain, fatigue, or fevers. Children may have poor height and weight gain before other symptoms appear.

Crohn’s disease is a chronic condition, meaning children may have periods of no symptoms (remission) alternating with periods of active symptoms (flare).  The symptoms of Crohn’s disease can be nonspecific and mild at first, which makes it difficult to diagnose early. In fact, the typical child with Crohn’s disease may have disease for more than a year before the diagnosis is confirmed.

Testing and diagnosis of Crohn’s disease

Our team of gastroenterologists perform a thorough health history and physical examination and use a variety of tests to determine a diagnosis. Testing may include blood work, stool samples, imaging studies, and an endoscopy and colonoscopy with biopsies (a small piece of tissue sent to the lab to evaluate for inflammation). These tests help to identify laboratory abnormalities, including anemia or low blood protein levels, identify areas of the digestive tract with active inflammation, and determine if there is a contributing infection.

Imaging studies, such as magnetic resonance enterography (MRE), ultrasound and video capsule endoscopy provide a detailed picture of the small intestine.  These, along with an endoscopy and colonoscopy, offer a head to toe look at the inside of the body.  Our child life specialists provide age-specific educational resources to assist in coping and psychosocial support with procedures.

The diagnosis may be difficult to confirm at first, which is why we use a variety of tests.  In some cases, it may also be difficult to distinguish Crohn’s disease from ulcerative colitis, the other common type of inflammatory bowel disease.  This is known as indeterminate colitis.

IBD In Children and Teenagers 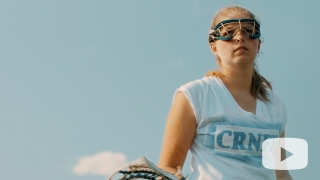 This video shares the story of three patients who receive care at the Center for IBD.

The treatment for Crohn’s disease is complex and may be different for every child, but the main goals are the same: to relieve symptoms, prevent flares, promote growth and nutrition, and achieve mucosal healing (healing of the intestine) and remission.  There is no “one size fits all” treatment for Crohn’s disease, and children respond to therapy differently.  Using a combination of medication, nutritional therapy, and in more severe cases, surgery, we aim to promote each child’s quality of life and accomplish all of his or her goals or aspirations.

When treating Crohn’s disease with medications, our goals are to suppress inflammation, heal tissue, and relieve symptoms.Commonly used medications include:

Even with proper medication and diet, some children require surgery to attain the best possible quality of life. The decision to proceed with surgery is made in collaboration between the child and family, the gastroenterologist, and the surgeon specializing in IBD. Surgery is used to relieve severe, ongoing symptoms and to help children achieve growth and weight gain when medical management is no longer effective on its own. Examples may include:

Surgical intervention is also considered for patients who have developed complications due to their Crohn’s disease, such as:

Our team will work closely with your family to determine if surgery is necessary, and our expert surgeons who specialize in IBD-related procedures will work to optimize your child’s quality of life. Learn more about J-pouch Surgery and Bowel Resection Surgery.

Children treated for Crohn's disease at CHOP receive long-term disease management through the Center for Pediatric Inflammatory Bowel Disease. A specialized team of pediatric IBD experts, including physicians, nurses, nutritionists, psychologists, and social workers works together on the long-term management of your child's Crohn’s disease. Our team has an improved ability to schedule quicker appointments at The Buerger Center for Advanced Pediatric Care and our conveniently located CHOP Care Network centers with physicians who are renowned scientists and researchers pursuing new therapies and advancements in treatment. We provide ongoing monitoring of symptoms and treatment, a well-developed nutrition plan, multidisciplinary care, and support groups for the entire family. Our goal is to positively impact the physical and social health of your family and child.