Ty, 12, enjoys wrestling and baseball and spending time with friends. He likes art, especially sketching and drawing. He also has a goofy sense of humor, and that helps Ty and his family as they manage his Crohn’s disease. 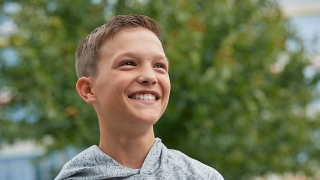 Ty’s medical problems started when he was 8. He began to have frequent stomach aches and nausea that caused him to throw up. Ty’s pediatrician originally thought he might have acid reflux, but treatment for that had no effect.

Ty was referred to a gastroenterologist near his home in Camp Hill, PA. Over the next few months he tried various treatments, but his stomach pain and vomiting got worse. A small child to begin with, he was losing weight at a worrisome rate. Ty was in so much pain and had so little energy that he missed the last three months of second grade.

An expanding set of tests finally yielded an answer. A blood test came back with high white cell counts, and a colonoscopy and endoscopy showed inflammation in his lower intestines. Six months after the stomach pains began he was diagnosed with Crohn’s disease, a chronic form (meaning it never goes away) of inflammatory bowel disease (IBD).

Ty was first given steroids, which provided some relief. But steroids aren’t a safe long-term treatment for children, and Ty only felt better when he was on high doses of the medicine. Every attempt to reduce the dose sent him back into extreme pain. Doctors then tried a biologic immune suppressant, which was administered with infusions every two weeks. But over time Ty’s body built up antibodies, meaning that it was becoming less effective. He was also placed on a mostly liquid diet.

To improve his nutrition intake, doctors tried nasogastric (NG) intubation. A plastic tube was inserted through Ty’s nose and passed through his throat and down into his stomach. Ty was also given another medicine that reduces inflammation, but the treatment required biweekly injections at home, which he found very painful. This became his treatment regimen for the next year, with occasional breaks from the NG tube to take a liquid nutrient by mouth.

The treatments were helping Ty survive, but they weren’t a long-term solution. He was lethargic, still in pain and had trouble eating. With the bleeding from his inflamed intestines, he became anemic and required biweekly iron infusions and occasional blood transfusions. Ty was hospitalized twice when his weight dropped dangerously low, and his school attendance was only about 50 percent in fourth grade.

Ty’s doctors recommended that he be given an ileostomy, a surgical operation where a diversion of digestive wastes is made from the lower intestines to an external collection bag. This would give the inflamed portions of his system a chance to rest and hopefully to heal. 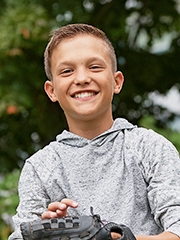 Ty’s parents wanted a second opinion before agreeing to a surgical procedure and made an appointment with the Division of Gastroenterology, Hepatology and Nutrition (GI) at Children’s Hospital of Philadelphia (CHOP). There, they met with Robert Baldassano, MD, Director of the Center for Pediatric Inflammatory Bowel Disease (IBD) and Director of the Microbiome Center, and Bridget Godwin, MD, a gastroenterology and nutrition fellow. After additional testing, Drs. Baldassano and Godwin agreed with the recommendation of an ileostomy and discussed medication and nutrition options.

Ty’s family wanted CHOP to manage his operation because of its stellar reputation. The Center for Pediatric Inflammatory Bowel Disease (IBD) is one of the largest centers of its kind in the United States and is a recognized research leader. Ty's mother, Janna, felt comfortable with CHOP.

“The doctors at chop really made me feel confident. they were clearly experts in treating ibd. we could tell this would be the best place for ty.”

Ty had the ileostomy surgery in November 2016 — his first real breakthrough since his stomach problems had started. With the ileostomy, food does not go through the sections of his intestines that are inflamed.

Prior to his surgery, Ty spent two years on a mostly liquid diet because of his Crohn’s disease. Two days after surgery, he ate a cheeseburger.

“It was a big relief and a joy for Ty to be able to eat like everyone else,” says Janna. “He had been frustrated and unhappy at being denied the pleasure of food. Now he was hungry again and able to eat the foods he liked.” 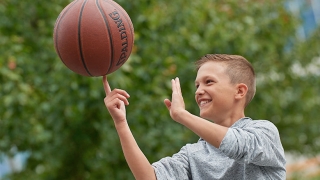 Within a short time after his surgery, Ty regained his energy and the stomach pains were gone. He was also attending school regularly. The frequent absences were behind him. Ty was now back with his friends every day — and thrilled to eat lunch with them.

But his colon did not heal as well as his doctors hoped. It remained inflamed, and the damage it had suffered did not reverse. In October, almost a year after the ileostomy surgery, he underwent another procedure to remove his colon.

That has made an even bigger difference in Ty’s health than the first procedure. “He’s now the best he has even been,” says Janna. He has gained weight and strength. He has returned to wrestling and playing baseball, two passions he had given up during his years of illness.

Ty still loves to draw — one passion he did not have to give up. He carries a satchel with him wherever he goes with his art supplies, so he can draw when he has a free moment and an inspiration.

“We had almost forgotten who Ty is,” says Janna. For three years he had been a quiet kid, preferring to stay indoors rather than go out and play. “He used to be on edge when he was in pain. Now he’s back — full of energy, Mr. Goofball. He enjoys hanging out with friends again. He has so much more strength.”

“Getting to CHOP is a long drive for us,” says Janna, “but it’s the best decision we’ve made for Ty’s health. Having confidence in his medical team puts our mind at ease. It wasn’t one quick fix, but we know we’re on the right track. He’s come so far. To see where his is now compared to where he was a year ago is amazing.” 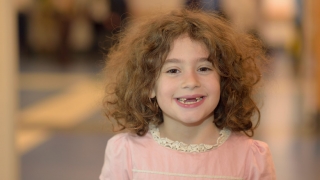 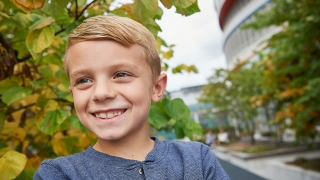 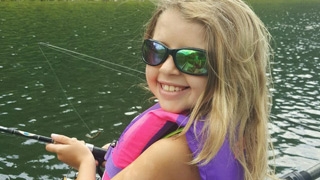