When Morgan was 11, her weight dropped to just 50 pounds due to complications from Crohn’s disease. With treatment at Children’s Hospital of Philadelphia (CHOP), she has since gained 40 pounds and has grown almost 8 inches. Now 14, Morgan is excelling in high school and is president of her freshman class. 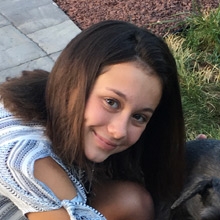 Morgan has always loved school. She didn’t miss a day of class from third through fifth grade. She sometimes had stomach pains and issues with constipation, and her pediatrician suggested laxatives when the constipation caused problems.

The summer before she started sixth grade, her parents, Griggs and Judy, recognized that Morgan’s stomach pains were getting worse. When the school year began, Morgan began to have less energy. She was too tired to do anything physical after school, and she barely had enough stamina to get through her homework.

Morgan stopped gaining weight — and then she started to losing pounds. Her pediatrician advised the family to put her on a high-calorie diet to build up her weight, with extra fiber to help with the constipation, but Morgan was losing her appetite.

In the spring, Morgan started to complain of pain in her bottom. She would take warm baths for temporary relief. By this time, her energy levels were lower than ever, and she even started missing school. “She was very thin and extremely pale,” remembers Judy.

With the combination of worsening symptoms, her pediatrician suggested that the family bring her to a gastroenterology (GI) specialist. They made an appointment with Janice Kelly, MD, a Pediatric Gastroenterologist at Children's Hospital of Philadelphia (CHOP).

After examining Morgan, Dr. Kelly told the family that her symptoms looked like Crohn’s disease, an immune disorder that causes inflammation in the tissue of the digestive system, and, in some cases, the mouth, anus and skin. Crohn’s disease is one of the two forms of inflammatory bowel disease (IBD).

Dr. Kelly took the time to describe the disease and what a diagnosis might mean for Morgan. She explained that the condition has no known cure, but that the symptoms could be controlled with medication and diet. Research is underway to find improved treatments and, eventually, a cure.

Morgan was admitted to CHOP when her weight had dropped to just 50 pounds and she was so weak that she couldn’t stand up. During her stay, she had an endoscopy and a colonoscopy, which confirmed the diagnosis of Crohn’s disease. She also had a seton (a silk or latex string) placed to drain the fistulas in her anus, which had been causing her so much pain.

Morgan was put on a nasogastric (NG) feeding tube and started on a combination of anti-inflammatory and immune-suppressant medications. With treatment, her health slowly began to improve. She started regaining the weight she had lost.

Among Morgan’s medications is Remicade®, a biologic immune modulator. She returns to CHOP every few weeks for her Remicade infusions, and every few months to meet with Dr. Kelly.

Morgan used the NG tube for about a year. Then, in consultation with Dr. Kelly, she switched to a gastronomy tube (G-tube), a tube inserted through the abdomen that delivers nutrition directly to the stomach. Peter Mattei, MD, an attending pediatric surgeon at CHOP with special expertise in surgery for IBD patients, performed the procedure to place the G-tube. The change has made it much easier for Morgan to manage the supplemental nutrition she needs.

Morgan, 14 is now a freshman in high school. She has grown almost 8 inches since she started on treatment for Crohn’s disease, and her weight has gone from 50 pounds to a healthier 90 pounds. She has been elected president of her class for the last two years. She’s popular, poised and articulate, a natural leader.

Last summer, she attended Camp Oasis, a weeklong summer program for kids with IBD. The camp is staffed by counselors who have the disease themselves. “That was really fun,” says Morgan. "I got to know other people with Crohn’s and learned some new things from them. It helped me realize I’m not alone with this.” She keeps up with the friends she made there in a group chat.

Morgan is also active with the Philadelphia/Delaware Valley Chapter of the Crohn’s & Colitis Foundation, and has been asked to be the Chapter’s “Honored Hero” for 2018.

Morgan, Judy and Griggs all appreciate the caring expertise of Morgan’s medical team at CHOP. “They are incredible,” says Judy. “They always make you feel that you’re important.”

“We wouldn’t be where we are today if not for CHOP,” says Griggs.