Matthew was born in March 2009 with a form of complex congenital heart disease: double outlet right ventricle (DORV) and dextrocardia. His heart was on the wrong side of his body, and the blood vessels leaving his heart were arranged abnormally.

An advanced prenatal ultrasound at a U.S. military hospital near their home in Virginia revealed the defects to Matthew’s parents, Kelly and Chris. They were told Matthew would need multiple surgeries after he was born.

When a family has a medical issue beyond a military hospital’s capabilities, the military supports the family in finding care elsewhere. One clinician told Kelly and Chris that if they could go anywhere; they should go to Children's Hospital of Philadelphia (CHOP). And they did. 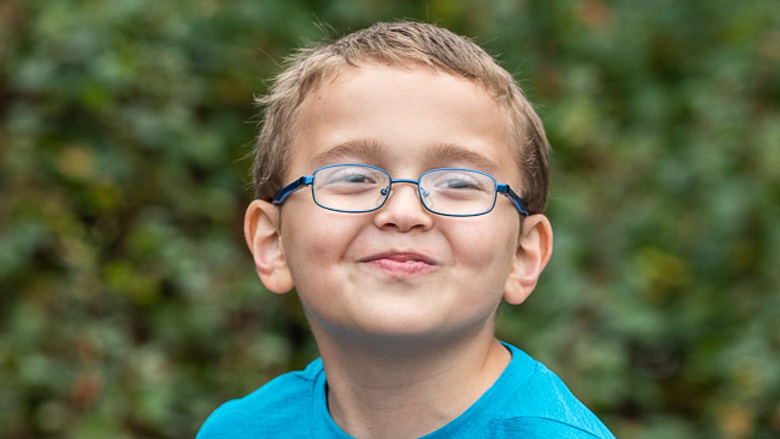 Help Us Make the Impossible Possible

Generous donors made the Garbose Family Special Delivery Unit a reality – making it possible to start treating Matthew’s complex heart disease before he was born.

The couple came to CHOP twice for evaluations with the Fetal Heart Program while Kelly was pregnant, and Matthew was born in CHOP's Garbose Family Special Delivery Unit, the world’s first birth facility in a pediatric hospital specifically designed for mothers carrying babies with known birth defects.

At 3 months old, Matthew underwent the Glenn operation, and when he was 3 years old, he had the Fontan procedure.

“We were told his [heart] valve would eventually need to be replaced,” says Kelly. “He did pretty well for a year.”

Then Matthew’s health deteriorated. “He had no appetite or energy,” Kelly recalls. On Christmas 2013, his blood’s oxygen saturation level was dangerously low. He was admitted to the local hospital. The next day, he was flown to CHOP.

A CHOP surgical team led by Thomas Spray, MD, then-chief of cardiothoracic surgery, replaced Matthew’s heart valve with a mechanical one. “They told us it might not fix the problem,” says Kelly.

A pump takes over his heart’s work

The day Matthew was listed for transplant, his heart almost gave up. As Matthew himself tells it, “I almost died, and it was snowing, and my dad drove up in the snow.”

To relieve the strain on Matthew's heart, doctors decided to implant a Berlin Heart ventricular assist device (VAD) that would take over the work of his heart. It was a difficult operation and Matthew was given only a 25 percent chance of surviving. Doctors weren't sure if the device would work in Matthew’s altered anatomy, but it was the only option available to prolong his life until a donor heart could be located.

After three months in the Cardiac Intensive Care Unit and another in the Cardiac Care Unit, Matthew was holding his own. On his birthday in March, he even got a visit from Batman. And while he couldn’t eat birthday cake — he was intubated at the time — he did get a taste of blue icing.

In June 2014, a donor heart match was found. Despite their joy for Matthew, Kelly and Chris were acutely aware that this meant a child somewhere had died and another family was mourning.

The transplant operation, performed by Stephanie Fuller, MD, was challenging, but after a few follow-up procedures, Matthew's health was transformed. He regained his energy and started on the path to becoming the boy he is today.

Swimming is a particularly poignant activity for Matthew and his family because they know Matthew’s new heart once belonged to a boy who drowned.

After a period of uncertainty, Matthew, Kelly and Chris sent the donor’s family a letter, which became the start of a uniquely meaningful connection. The families have met four times, most recently at a fundraiser for the United Network for Organ Sharing, the nonprofit that manages the nation’s organ transplant system.

And for a child who once found it difficult to walk the distance between his house and the school bus, Matthew is reveling in his new high-energy life. At Heart Camp, a gathering place at the Eastern Shore of Maryland for children with heart conditions, Matthew had one goal: Do anything he’d never tried before.