Hazel’s smile is infectious: her entire face lights up, her eyes sparkle and she radiates joy. And when the 21-month-old meets someone new, she can’t resist waving rapidly until her wave or smile is enthusiastically returned 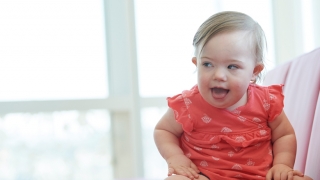 “Hazel is an amazingly social little girl,” says her mom, Lynne Eddis. “She loves interacting with people — especially little kids. She’s curious about everything and loves to explore. And she has so much energy, sometimes it’s hard to keep up.”

Today’s high-spirited toddler is a sharp contrast to the early-term baby who was born with Down syndrome and a host of related issues, including a congenital heart defect. In her early days, Hazel didn’t have enough strength to cry or eat for more than a few minutes, and she struggled to gain weight.

With the help of specialists from the Trisomy 21 Program and the Cardiac Center at Children’s Hospital of Philadelphia (CHOP), Hazel received the care, support and treatment she needed to survive her early challenges — and to thrive in the future.

When Lynne was pregnant with Hazel, she and her husband, Kevin, learned their unborn child had Down syndrome (also known as trisomy 21) and congenital heart disease. With limited knowledge on both conditions, the couple came to CHOP for further evaluation, monitoring and treatment.

Experts from CHOP’s Fetal Heart Program performed a thorough prenatal examination and diagnosed the Eddis’ unborn baby with a complete atrioventricular canal defect. Though the condition was severe, doctors said it would not need treatment immediately after birth. They did caution, however, that the baby would need open-heart surgery when she was a few months old.

The Eddis’ also met with a social worker from the Trisomy 21 Program, who gave them more information about Down syndrome, the most common chromosomal anomaly in humans, and a check list of what to do once Hazel was born. Armed with information and support, the remainder of Lynne’s pregnancy went smoothly.

On Sept. 20, 2016, Hazel was born at Pennsylvania Hospital. Her parents brought her home a few days later.

“She was such a happy baby, but she tired easily — especially when she was eating,” Lynne says. Hazel struggled to put on weight, and as the date of her heart surgery approached, doctors inserted a feeding tube to ensure she got enough calories.

In December, CHOP Cardiac Surgeon Christopher E. Mascio, MD, performed open-heart surgery on 2 ½-month-old Hazel. A day later, she was eagerly drinking her bottle. Four days after surgery, she was released from the hospital.

“That was really a turning point for Hazel,” Lynne says. “After surgery, she had so much more energy and gained weight so much faster. In fact, that was the first time we ever heard her cry. She was too weak to do it before.”

Once Hazel was feeling better and gaining strength, her parents continued to talk to the Trisomy 21 Program about ways they could help her meet developmental milestones like grasping objects, talking and crawling.

Under the direction of CHOP clinicians, Hazel had started receiving Early Intervention Services from the county when she was 6 weeks old. Physical, occupational and speech therapists came to the Eddis’ home each week, but progress was slow until after her heart surgery.

The Trisomy 21 team encouraged Hazel’s parents to use the wealth of CHOP-supported services created for families who have a child with Down syndrome.

“We want to do everything we can to help Hazel develop to her fullest potential,” Lynne says. “And CHOP has so many great resources available.”

The family has attended a new parent reception, where they met other families who have children with Down syndrome; an educational symposium, where they heard about the latest Down syndrome research and treatments; and twice participated in a trisomy 21 pool group to strengthen Hazel’s muscles and introduce her to other children like her.

All the hard work is paying off. Hazel’s fine motor skills and communication skills have improved dramatically. She can now grab small items, move them from hand to hand, play with a ball, speak a few words, and use sign language. Her gross motor skills — required for crawling and walking — are developing more slowly.

In October 2018, Hazel celebrated another milestone: being named a Champion for the CHOP Buddy Walk® and Family Fun Day. This festive annual event celebrates children and adults with Down syndrome and raises important funds for the Trisomy 21 Program at CHOP.

“We’re really happy to be able to give back and be part of the program that has helped us so much,” Lynne says. “It’s important to us that Hazel knows she has support and opportunities at an early age that will allow her to maximize her possibilities.”

“We don’t know what her future holds. But we’ll learn and grow and adjust our expectations,” she adds. “I do know that Hazel is going to be surrounded by people she loves and that they are going to love and respect her.” 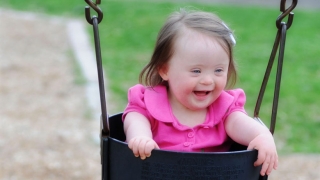 Born with trisomy 21, Katie's doctors knew to be on the lookout for potential heart issues. At 3 months old, Katie was diagnosed with patent ductus arteriosus. 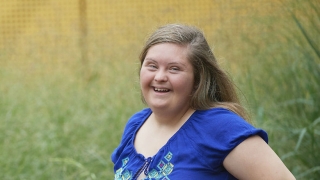