When 6-year-old Ali Falah al-Ajmi became seriously ill for the second time in his young life, his family believed only one place in the world could offer him the best care — Children’s Hospital of Philadelphia (CHOP). 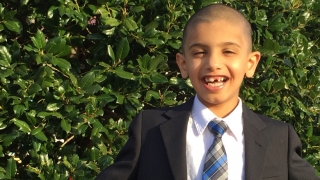 All Ali’s parents, Falah al-Ajmi and Zahrah Alyami, could think of was their firstborn son — a shy, doe-eyed boy with a wide toothy grin who loved school and soccer.

“We knew Ali would get the very best care here,” says Falah. “And we needed to do everything we could to get him here.”

From joy to fear

Ali’s journey to Children’s Hospital of Philadelphia is long and winding, but, perhaps, can be traced back to July 10, 2009, the day he was born.

Zahrah gave birth in a small Saudi Arabian hospital near her family home, while Falah was working offshore with the Kuwait Oil Company. At first, Ali seemed like a normal, healthy baby.

But four days later, doctors called Falah at sea and told him something was wrong. Though his infant son was eating, sleeping, and crying like other babies, doctors couldn’t find his heartbeat.

Ali was transferred to a larger hospital in Saudi Arabia where doctors discovered Ali’s heart was transposed — that is, it was on the wrong side of his tiny chest. Unfamiliar with such a rare congenital heart defect, doctors transferred Ali again, this time to a hospital in Kuwait where he underwent more testing.

Doctors there learned Ali’s heart condition was even more unusual. Instead of being born with four chambers of his heart, Ali was born with only two. To survive, he would need a series of open-heart surgeries to reroute the blood and oxygen flow in his body. His best hope was to travel to the United States for care.

At 6 months old, when Ali was stable enough for travel, he and his family flew to the U.S. for the first of two planned heart surgeries. The surgery was a success, and the family returned to Kuwait to allow Ali time to grow and heal before his second surgery.

At 18 months old, Ali returned to the U.S. for his second heart surgery. But this time, something went wrong. Instead of improving after surgery, Ali’s condition got worse. His oxygen levels plummeted and doctors warned the toddler might be headed for lung failure. With serious heart and lung issues, the doctors encouraged Ali’s parents to take him home to Kuwait and enjoy whatever time they had left.

Scared and angry, Ali’s parents were not ready to give up. They demanded a second opinion, and lobbied Kuwait’s government to allow Ali to be examined at another U.S. hospital with an international reputation for pediatric cardiac care. That’s when Ali and his family were first introduced to Children’s Hospital of Philadelphia.

“From the moment we got here, things were different,” says Falah.

“The nurses and doctors treated Ali in a very soft, very professional manner,” adds Zahrah. “And they treated us with respect.”

While at CHOP, Ali’s family also met with doctors from the Single Ventricle Survivorship Clinic, part of the Fontan Rehabilitation, Wellness, Activity and Resilience Development (FORWARD) Program. The program is one of the few in the world dedicated to finding new treatments and improving the quality of life for children —like Ali — with single ventricle heart defects.

“We found hope at CHOP,” Falah says. “Ali — and thousands of other children — has a brighter future because of the research being done at CHOP.”

In the fall of 2011, Ali’s family returned to Kuwait. With his siblings and extended family by his side, Ali thrived. He began school on time with his peers and quickly showed an aptitude for math. Ali enjoyed drawing, building elaborate Lego creations, and wrestling with his younger brother Dafer.

“In many ways, he was just a normal boy,” says Falah. Ali’s heart condition did limit his physical activity: He couldn’t participate in strenuous activities for long periods of time, but could still play soccer at home with his father and brother.

In May 2016, things changed for Ali. He began vomiting after eating and had severe pain in his gut. His family took him to a hospital in Kuwait where doctors discovered Ali’s intestines hadn’t formed properly during his prenatal development.

Ali was diagnosed with intestinal malrotation, a serious birth defect involving the gastrointestinal track. If left untreated, it could lead to more serious conditions such as volvulus, which would cut off blood supply to an area of his body, or intestinal obstruction, a blockage that would stop his intestine from functioning.

Ali needed surgery — and quickly. Falah felt strongly that Ali could only get the best care at Children’s Hospital of Philadelphia.

“We knew we needed the best gastroenterology doctors in the world and we were confident — based on our past experience with CHOP’s Cardiac Center — that we would find the most expert care, most understanding staff, and best outcome possible for our son at CHOP,” says Falah.

Falah successfully lobbied his employer to allow the family to return to CHOP, and the Kuwaiti Public Authority for the Disabled, which oversees care for people with special needs, approved travel to the U.S. for Ali’s treatment.

Ali’s family worked closely with CHOP’s International Patient Services to make the necessary arrangements to fly to Philadelphia, schedule Ali’s initial appointments with various specialists, and find a place for the family to stay and a way to get around.

On June 21, 2016, Ali and his family arrived in Philadelphia. The first week was filled with appointments to address his most urgent needs — gastroenterology, cardiac, surgery and anesthesia.

Once gastroenterologists confirmed his diagnosis of intestinal malrotation, a multidisciplinary team of specialists worked together to determine the best surgical approach, best overall care plan, and determine what precautions were needed to protect Ali’s heart during surgery.

On Aug. 23, 2016, Michael L. Nance, MD, FACS, FAAP, performed a laparoscopic Ladd procedure on Ali to untwist his intestines, ensure they were healthy and had good blood flow, and remove any areas that were not healthy. The procedure is the gold standard treatment for intestinal malrotation in children, resulting in shorter time in surgery, shorter hospital stays, and quicker recovery times.

Ali’s surgery was a success and his gut pain disappeared. In the months that followed, and as Ali grew stronger, his family sought the expertise of other specialists at CHOP to help improve the quality of Ali’s life.

Through months of appointments, procedures and uncertainty, Ali’s family felt confident that Ali’s team of doctors, nurses and the staff at International Patient Services would do everything in their power to ensure a positive outcome for their son.

“Everyone was very professional with us and really wanted us to be happy with the care Ali received — not just the sponsors who were paying the bills,” says Falah.

Hopeful for the future

Today, Ali and his family are back home in Kuwait. He has returned to school and is enjoying the second grade.

He still dreams of being a professional soccer player like his idol Cristiano Ronaldo, but for now is content playing soccer with his family at home.

Falah and Zahrah don’t know what the future holds for Ali, or when he may need medical help again. They are hopeful for the future and new research that may help Ali long term. For today, they are comfortable in the knowledge that the team at Children’s Hospital of Philadelphia will always be there for them.

“CHOP is like home to us now,” says Falah. “The doctors are experts, the staff is supportive, and the smiles come from the heart. We wouldn’t trust anyone else. We wouldn’t go anywhere else.”