Caleb lost two fingers on his left hand as an infant, and was left with a layer of scar tissue that limited his hand’s movement. After a series of reconstructive operations, Caleb, now 8, can catch a ball with both hands, ride a bike and button up his own shirt.

During treatment for gastrointestinal problems, Caleb developed a blood infection and became septic, which led to the removal of two fingers on his left hand. He was left with a normally formed thumb and pointer finger of his left hand, and a middle finger that was misaligned — it angled away from his remaining fingers and forward, toward his palm. His hand was also affected by scar tissue that limited its movement and flexibility. 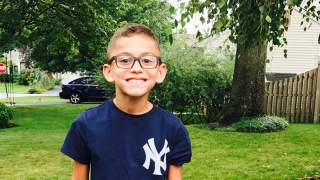 Once Caleb’s other health problems were under control, his parents, Robin and Eric, and his doctors began to consider the best option to improve the function of the damaged hand.

At the age of 6 weeks, Caleb was examined at Children’s Hospital of Philadelphia (CHOP) by Benjamin Chang, MD, an attending surgeon in the Division of Orthopaedics and Division of Plastic, Reconstructive and Oral Surgery who has special expertise treating hand and upper extremity conditions. Dr. Chang, in consultation with Caleb’s parents, began developing a plan for restoring as much function as possible to Caleb’s left hand.

A second procedure took this even further, grafting skin from Caleb’s hip to his hand to release even more scar tissue. This was followed by a third procedure, a minor one to remove calcium deposits that had formed in some of the damaged tissue.

When he was 7, Caleb had the most significant procedure. Dr. Chang took a skin graft from Caleb’s other hip to add more skin to his palm, enough to allow the palm to be opened fully. He also realigned Caleb’s middle finger.

“That was his transformational surgery,” says Caleb’s mother, Robin. “It changed his life.”

Caleb wore a cast for a month after the procedure, and it took another month to build strength and flexibility in his newly reformed hand. But then he started to notice the difference in what he was able to do.

Before, the misaligned middle finger had made many activities difficult. It got in the way when he rode a bike. It prevented him from buttoning clothes himself when getting dressed. He loved basketball, but had played almost exclusively with his right hand. He couldn’t catch a ball with both hands or wear a baseball glove.

“He kept discovering new abilities,” says Robin. “He would say, “Wow, this is something I can do now that I couldn’t do before.’ Everyday things that we take for granted, like putting on his own shirt, catching a ball with two hands, using a baseball mitt, gripping a bike with both hands. It gave him confidence. It allowed him the freedom to play with his peers.”

Caleb participated in basketball camp over the summer, and, with practice, grew comfortable handling the ball with both hands. He has a basketball hoop at home and plays every day.

“A big milestone was riding his bike,” say Robin. “That was really a challenge before. Now he can do it with both hands on the handlebars.”

Caleb loves to garden and landscape. Until the most recent operation, he did that using a special glove for his left hand, and he was limited in what he could do. He loves to help pick up brush and to plant, tasks he can handle more easily now.

Even before the most recent operation, which has given him so many new abilities, Caleb had a deep appreciation for Dr. Chang. An assignment in the first grade was to write a book. On the first page of his book, Caleb wrote, “I dedicate this to Dr. Chang.”