It could be nothing. Or it could be one of the worst things imaginable.

That’s what Heather Moran was thinking when her 7-year-old daughter, Joy, told her that she was having chest pains. 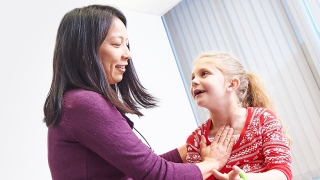 “Because of our history, we knew we should look into it further,” Heather says.

Heather has a family history of hypertrophic cardiomyopathy, a disease of the heart muscle that can cause sudden cardiac arrest (SCA). Her brother died after experiencing an SCA at age 36, and his twin was diagnosed with advanced cardiomyopathy soon after. In 2014, Heather learned that she has a gene that places her at risk for the disease. And now she and her husband, Sean, were concerned that their daughters did, too.

The Morans made an appointment for Joy and her sister, Ryann, 11, at The Children’s Hospital of Philadelphia.

“We were able to get in very quickly, which was a blessing,” she says.

At CHOP, the Morans met with Kimberly Lin, MD, and other experts from the Familial Cardiomyopathy Program, a joint program of CHOP and Penn Medicine. The team determined that Joy’s chest pains were not caused by a heart condition, but the results of the genetic tests were not as reassuring: both Joy and Ryann have the gene for cardiomyopathy.

“It was a little overwhelming,” Heather says. “But there is a sense of relief in knowing ahead of time and having a game plan and knowing they’ll be monitored. So many don’t know that they have a cardiomyopathy until it’s too late.”

Both girls now come to CHOP every year for testing at the Cardiovascular Exercise Physiology Laboratory — including echocardiograms, EKGs and exercise stress tests — and so far neither has shown signs of developing a cardiomyopathy. The CHOP-Penn team works closely with their pediatrician to coordinate their care — particularly for Ryann, who also has ADHD — and will continue to monitor their health as they grow up.

Heather is very grateful to Dr. Lin and the other clinicians on her daughters’ care team for everything they have done for her family. “They have been amazing in dealing with the whole picture,” she says. “The girls’ care has been so thorough and comprehensive. It really just blows me away.”