“Finding out we were pregnant with Jameson was probably one of the best days of our lives,” recalls Stacy, adding that she and her partner Stephanie had tried for two years. But twelve weeks into the pregnancy, an ultrasound performed at their fertility clinic showed an unusual bubble on the baby’s stomach. 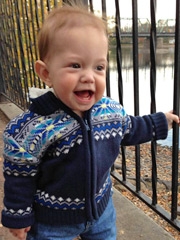 The couple was referred to a maternal-fetal medicine specialist, who thought the bubble might be an omphalocele. This type of abdominal wall defect causes the bowel, liver and other abdominal organs to protrude out of the abdomen at the base of the umbilical cord, where they’re covered by a clear, thin membrane or sac. The specialist thought the baby might have a heart condition as well, and mentioned the possibility of associated genetic disorders.

“We were in tears,” says Stacy. The couple researched omphalocele online and learned about Children’s Hospital of Philadelphia’s Richard D. Wood Jr. Center for Fetal Diagnosis & Treatment, which has vast experience treating abdominal wall defects. Stacy called and set up an appointment, and after a full day of testing, the condition was confirmed as a giant omphalocele. The stomach, gall bladder, liver and intestines — were all outside of the baby’s body. Still, Stacy and Steph were relieved to learn that their baby did not have a heart condition.

“It sounds cliché, but after that day, we totally had hope,” recalls Steph. “Everybody’s confidence and positive attitudes made us feel so much better about the journey we were going to take.”

That journey was clearly laid out for them before they left CHOP that day. It included checkups once a month for the remainder of the pregnancy and delivery in the Garbose Family Special Delivery Unit (SDU). But their journey took a bit of a turn when Stacy went into early labor at 33 weeks. Jameson was delivered in the SDU by C-section and weighed 4 lbs., 15 oz. The omphalocele extended several inches from his little body. Because of his small size, there wasn’t enough room to fit all of the organs inside his body right away without compressing his lungs.

He spent the next two and a half months in CHOP’s Harriet and Ronald Lassin Newborn/Infant Intensive Care Unit (N/IICU) undergoing a treatment approach called “paint and wait.” The sac covering the omphalocele was “painted” with an antibiotic cream and covered with elastic gauze while the skin gradually grew over the sac. This process gives the lungs time to continue growing and allows the organs to gradually return to the abdominal cavity with the aid of gravity.

Stacy and Steph were by his side every day and were trained by the N/IICU team in how to care for their son. Seven weeks after Jameson’s birth, they were finally able to hold him.

“That was incredible,” recalls Stacy. “Then we never wanted to put him down.”

Children with conditions like giant omphalocele can face a variety of complications as they grow, including a secondary condition called pulmonary hypoplasia — underdeveloped lungs — that may result in problems with breathing, feeding, heart function, hearing and other developmental milestones. This makes ongoing follow-up care an extremely important element of long-term treatment.

Jameson is one of several hundred children enrolled in CHOP’s Pulmonary Hypoplasia Program (PHP), a comprehensive program that provides complete care for babies with conditions that cause small lungs. Since 2004, the program has followed more than 100 patients with giant omphalocele. Through the PHP, CHOP is the only institution studying the neurodevelopmental outcomes of patients with pulmonary hypoplasia.

After surgery, Jameson struggled with breathing and feeding issues, needed a G-tube for a few months, and had to be hospitalized for a super bug and RSV. But since those initial bumps, he’s been doing great. He used to use an inhaler three times a day, but now he barely uses it. The only sign of his omphalocele is a faint scar on his belly. Otherwise, he returns for visits with his CHOP pulmonologist every four to six months to monitor his lungs and has baseline tests every year with the PHP.

“He’s not that sick kid anymore,” says Steph. “It’s still surreal looking back. I can’t believe that happened and now he’s running around. You wouldn’t know anything had been wrong with him.” 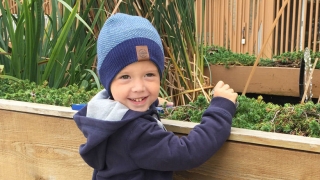 Jameson is now 4 years old and in preschool. He plays soccer and loves the beach and dancing, helping his moms cook, and being an independent little boy. His favorite pastime is doing yard work using his pretend lawn mower, weed wacker, hedge trimmer and leaf blower.

Stacy and Steph belong to a Facebook group called Mothers of Omphaloceles, where they’re often reminded how lucky they are that everything worked out so well for Jameson, because that’s not always the case.

“We are so thankful that we came upon CHOP,” adds Stacy. “Without them, Jameson wouldn’t be doing so well.” 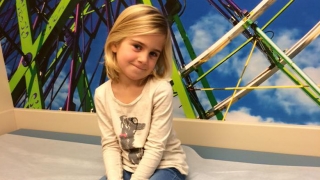 By the time she was 3 months old, Charlotte had undergone seven surgeries to repair a giant omphalocele. See how she's doing today. 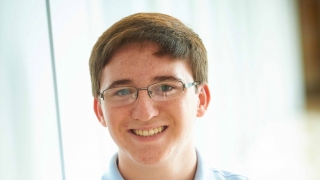 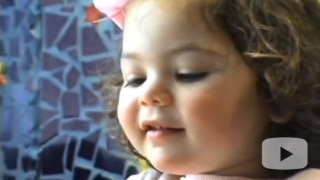