Riley, 9, is a happy kid who loves life and enjoys exciting activities — he recently went zip lining for the first time. His journey is remarkable, as Riley is one of a handful of children in the world who have had a heart and double lung transplant.

Carol and Darren first learned of their unborn baby’s medical problems during a prenatal ultrasound at a hospital in southern New Jersey. The couple were told that their baby had heterotaxy syndrome, a general term for a birth defect in which the organs are out of place. In their baby’s case, his intestines weren’t aligned correctly, he didn’t have a spleen, and his heart was malformed. He had one ventricle instead of two, and the veins and arteries leading to and from his heart appeared to be misplaced.

“We were told that his situation was very bad,” Carol remembers. “He had a 50 percent chance of survival.”

Coming to Children’s Hospital of Philadelphia

Carol and Darren wanted a second opinion and contacted the Richard D. Wood Jr. Center for Fetal Diagnosis and Treatment at Children’s Hospital of Philadelphia (CHOP). Two days later, they traveled to Philadelphia for a day of tests and consultations with different medical specialists. Carol and Darren were impressed with the depth of the expertise at CHOP. “I switched care that day,” Carol says.

The tests confirmed the serious nature of their baby’s medical problems, and specialists agreed that he would likely need heart surgery in order to survive. They suggested that Carol deliver in Philadelphia at the Hospital of the University of Pennsylvania, where a CHOP medical team would be on hand for the birth. This was in early 2008, just months before the opening of CHOP’s Special Delivery Unit, a facility designed for mothers giving birth to infants with known birth defects.

Riley was born in Philadelphia in April 2008 and taken immediately to CHOP for imaging and treatment. He had open heart surgery when he was 4 days old to reroute his pulmonary veins, which at birth did not feed directly to his heart. The surgery included placement of a Blalock-Taussig (BT) shunt, a tube that connects one of the branches of the aorta and the pulmonary artery.

Thomas Spray, MD, Chief of the Division of Cardiothoracic Surgery at CHOP, performed the operation. It had been planned as the first of three procedures to correct the placement of the veins in Riley’s heart, but other problems emerged, and Riley’s medical team had to change course.

Scar tissue was appearing in Riley’s rerouted veins, which began to limit blood flow from his heart to his lungs. Jonathan Rome, MD, Director of the Cardiac Catheterization Laboratory in CHOP’s Cardiac Center, removed the scar tissue in a catheterization procedure, the first of many that Riley would need.

Riley had another open heart surgery in July to open the upper veins to his heart and improve blood flow. Then, when he was 9 months old, he had a procedure to adjust the position of his intestines and to insert a gastronomy tube (G-tube).

Riley’s breathing and circulation were so strained that even eating was a struggle. The seconds it took to swallow food were seconds he needed for breathing. Any activity like sitting up or moving in a special rolling walker drained his limited supply of energy.

Every six to eight weeks, Dr. Rome had to perform another catheterization to clear scar tissue inside Riley’s veins. In one of these procedures, when Riley was 1 ½ years old, Dr. Rome found that one of the veins had completely closed and could not be reopened.

Listed for heart and lung transplant

With this development, Riley was placed on the list for a heart and lung transplant. For this next stage of Riley’s care, his medical team’s primary goal was to keep him alive until a donor heart and lungs became available. His medical team included his cardiologist, Anita L. Szwast, MD, members of CHOP’s Lung Transplant Program and Heart/Lung Transplant Program, Brian Hanna, MDCM, and members of the Pulmonary Hypertension Program.

“He was a purple baby,” says Carol. “He couldn’t breathe. He couldn’t eat. He couldn’t talk. He was a very sick child.” Any small exertion caused him to throw up. With therapy, he learned how to walk, but his body didn’t have the stamina for him to walk more than a few steps at a time.

Over the next three years, the family got three calls with news of donor organs. But each time, it was discovered that the heart or lungs were damaged in some way and not suitable for transplant. So, when they got a fourth call, just a month short of Riley’s fifth birthday, they had low expectations.

“We didn’t think it would happen,” says Carol. “I packed lightly, not expecting to stay for long.” But this time the organs were healthy and a good match for Riley. Dr. Spray led the surgery, and when Carol and Darren saw Riley the next morning in the Cardiac Intensive Care Unit, he had a new heart and lungs.

Riley had another rough stretch to withstand. Soon after the operation, he came down with parainfluenza, a viral respiratory infection. Because he was on medication to suppress rejection of the donor organs, his body had no ability to fight the virus and he became very sick. The medical team found a medication that brought the virus under control, but a side effect for Riley was renal failure. His body started to retain fluids. He ended up on a ventilator, then had a tracheostomy to enable safer long-term ventilation at home.

“That was a terrifying time,” remembers Carol. “He had been thin and weak before the transplant, but he didn’t look sick. Now he looked sick. He was very swollen. He didn’t look like my child.”

Riley was at CHOP for five months after the transplant. His medical team helped him get rid of the virus, then helped him through the renal problems and his difficulties with breathing. By the time he was discharged, he no longer needed ventilation. He kept the tracheostomy tube in for a few more months for overnight support, then had the decannulation procedure to remove it in October. 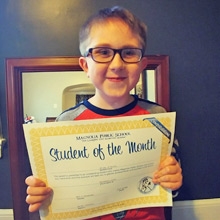 Riley was home-schooled that year and the next, with additional support at home from physical, occupational and speech therapists. When he was 8, his parents and his medical team felt he was ready to attend school with other children.

Now 9, Riley loves school and being with other children. He’s working on refining important life skills, and his parents are delighted with his progress.

“He’s not even supposed to be here,” Carol says. “He keeps beating the odds. Even now, four years after his transplant, every day we are thankful we got through another day. In the big picture, he’s doing amazingly well. He’s here. He’s living. He loves life. He’s not afraid to do things, swimming, bowling, going to the movies. He couldn’t do any of these things before and now he can.”

Riley’s zip line adventure came at the Echo Hill Outdoor School (EHOS) Heart Camp, which runs for a week every summer on Maryland's eastern shore. The camp offers fun, challenging and educational activities for kids with heart problems, under the supervision of an all-volunteer medical staff of physicians, nurses, therapists and psychologists.

Riley’s greatest passion is professional wrestling. He knows the stars and follows their progress. Some have even gone out of their way to connect with him, and he proudly shares pictures of these encounters on his Facebook page.

“So many different teams at CHOP have helped us,” says Carol.

“We are not on this journey alone. We have CHOP with us. They are the other part of our family. It’s been wonderful to have these people who take amazing care of Riley, and who also take care of us. They are on this journey with us, and we know they’ll be there for us.”