Abigail Ridler is a shining example of turning adversity into an advantage. 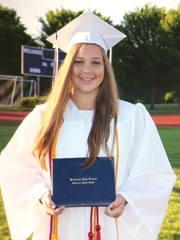 Dealing with diazoxide-responsive congenital hyperinsulinism (HI) for 19 years has given her a resilience that many of her peers never discovered.

“It was hard growing up, being different,” says Abigail. “In middle school, especially, I resented it. Because of taking diazoxide, I’ve had the typical hair growth and water retention. Sometimes, I have really low energy because of low blood sugar.

“But I’ve come to accept that HI is a part of me.”

It’s been part of her since she was identified with low blood sugar at two hours old. Her hypoglycemia was controlled with diazoxide and cornstarch and maple syrup feeds. The HI diagnosis came at 5 days old. She was 2½ when her mother, Mary Turano, brought her to the HI Center at Children’s Hospital of Philadelphia for an evaluation. Genetic tests showed Abigail had diffuse disease, and — with continued support from the center — her HI has been controlled with diazoxide and diet.

Controlled, yes. But it’s always there, needing attention: testing her blood sugar, planning her snacks and meals, staying alert for signs of hypoglycemia and, until last summer, making sure she takes her medication twice a day.

One way she coped was by sharing what she learned with other kids with HI. She and her mother have connected with families through Congenital Hyperinsulinism International (CHI), which co-sponsors the annual HI family conference with CHOP. “For example, when you’re on diazoxide, it’s good to have a snack every three or four hours,” Abigail says. “I made sure I always had snacks and my sugar testing kit with me at school.

“The main thing I tell kids: Don’t give up. Stay true to yourself. It does get better.”

Another coping mechanism was to get involved in raising awareness of HI and other rare diseases. “For my senior project in high school, I organized a rare disease night for the community and raised $1,400 that I donated to CHI and NORD (National Organization for Rare Disorders). I even created a website,” she says.

Fatigue and difficulty concentrating, typical symptoms of low blood sugar, could have been excuses for Abigail to skate by in school, but instead she pushed herself to excel.

“It didn’t come easily, but I found methods that help me focus,” she says. “Each person needs to find what works for them.”

Tenacity is part of the equation, too.

“She developed a strong resilience,” Mary says. “She doesn’t get discouraged. When other kids give up, she doesn’t. She plugs along.”

“I always know that I have to stay strong and understand that, while I may be different, my HI has made me more determined to succeed,” Abigail says. “I always look forward to another challenge.”

In 2013, Abigail participated in a study led by HI Center Director Diva De León-Crutchlow, MD, of an investigational drug, exendin-(9-39), which works to block the release of insulin. “It worked perfectly for me,” Abigail says.

Abigail also took part in another medication trial, for Xoma 358, last summer. “I participate in studies so people with HI will, hopefully, have more options and better treatments in the future,” she says. Since her HI is dominant, her children could inherit HI. “I have a personal interest in helping improve outcomes.”

For Abigail, learning to live with HI also fostered a love of science and an interest in medicine. She’s now a freshman in the honors program at Eastern Connecticut State University, majoring in biology and pre-med.

“I know I want to go into medicine,”a she says. “I like neurology and surgery, and patient contact. Maybe I’ll end up being a pediatrician.” 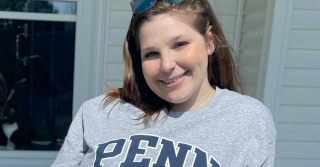 When Abigail was at CHOP for an appointment with Dr. De León during her senior year in college, she mentioned that she planned to take a gap year after graduating to figure out her next step: going med school or to pursue another advanced degree.

“Dr. De León mentioned that another endocrinologist, Dr. [Diana] Stanescu, had an opening in her lab and told me to send my resume,” Abigail says. Shortly thereafter, she received a call, an interview and an offer. Abigail had a couple things in her favor: courses in developmental biology and lab experience.

“it’s a very hot topic in the industry,” Abigail says. “Stem cells and the regenerative process are really taking off. It’s where I really wanted to be.”

Specifically, Abigail has been working on a study of the impact of perinatal stress on prolonged hyperinsulinism and eventual diabetes during her year-long internship. It convinced her that her future is in research; she’ll begin a PhD program in developmental cell and molecular biology at the Perelman School of Medicine at the University of Pennsylvania in the fall.

“When I was little, I came to Philadelphia and CHOP for answers about my hyperinsulinism,” she says. “Now, I’m helping to find answers that will have an impact on others. I’ve come full circle.”