Holden and his brother, Elliott, share more than a love for cars and trucks. They also both have the same rare genetic neurologic disorder, known as MECP2 duplication syndrome. It’s a diagnosis that brings with it a lot of uncertainty. Support from the knowledgeable specialists at CHOP has been instrumental in helping their parents prepare for and face the unknowns. 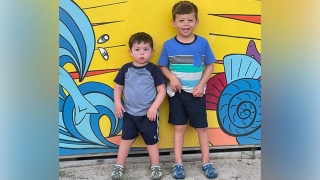 Holden was born at 34 weeks due to an umbilical cord abnormality. As he developed, he missed milestones and had speech and motor delays. His parents, Andrea and Stephen, were told it was due to him being born premature. But when their second child, Elliott, was born and began to miss the same milestones, they worried something more was going on.

The boys were referred for genetic testing, which came back positive for MECP2 duplication syndrome, a rare progressive neurologic disorder. The physicians at the hospital they were at near their home in Towson, Md., didn’t have much experience with or knowledge about the condition, so Andrea and Stephen took to the internet to research MECP2 themselves. In doing so, they learned about Eric Marsh, MD, PhD, a pediatric neurologist at Children’s Hospital of Philadelphia who has special expertise in diagnosing and treating children with MECP2 duplication.

“When you have such a rare disorder, it’s comforting to know your care is in the hands of someone who is knowledgeable and has experience seeing kids with the condition firsthand,” says Andrea of the family’s decision to have the boys see Dr. Marsh. “He was able to give us more specific information on what we were dealing with.”

Dr. Marsh leads research efforts to better understand MECP2 gene mutations with the goal of developing improved treatments to address specific symptoms and improve quality of life for children with the disorder. Holden and Elliott were enrolled in the Rett Syndrome, MECP2 Duplication, and Rett-related Disorders Natural History Study, which was funded by the National Institutes of Health (NIH) and completed enrollment in 2021. The goal of this study was to gather as much data as possible about children and adults with Rett syndrome in order to stimulate more clinical research and better prepare for future clinical trials.

“There’s no one else that has more knowledge about the neurological impacts of this condition than Dr. Marsh,” says Stephen. “He understands the progression of the disorder as a child grows more than anyone else we have seen.”

There is no therapy for MECP2. Care consists of managing symptoms, which can include intellectual disability, epilepsy, and severe or recurrent respiratory infections. Both Holden and Elliott have low muscle tone and global developmental delays, and they are nonverbal. They have weekly sessions with local speech therapists, physical therapists and occupational therapists.

MECP2 duplication syndrome is a rare neurodevelopmental condition caused by an extra copy (duplication) of the MECP2 gene.

Overall, the long-term prognosis for boys with MECP2 duplication is highly connected to whether or not they develop seizures. About half of affected individuals will have seizures, which can be difficult to control, and can be associated with developmental regression. Boys who tend to have later onset of seizures or seizures that are more easily controlled tend to do better developmentally.

“The real pain point as parents is that when kids develop seizures, they can start to lose some of the skills they’ve gained. We have heard that some affected have been able to attend community college or be employed whereas some kids are unable to walk or feed themselves,” says Stephen, who notes that, currently, both boys are able to walk and feed themselves and don’t need supplemental nutrition. “We are walking this path together with Dr. Marsh. We rely on him to know what to be on the lookout for and help us navigate through that.”

The boys have annual checkups with Dr. Marsh in CHOP’s Rett Syndrome Clinic, which recently received designation as a Center of Excellence, to monitor their development. As a senior genetic counselor in the Rett Syndrome Clinic, Holly Dubbs, MS, LCGC, keeps in touch with the family in between appointments, sending them the latest MECP2 research papers and answering any questions that come up.

“The communication and overall experience at CHOP are really good,” says Stephen. “And Dr. Marsh has a phenomenal bedside manner.”

Holden is now 5, and Elliott is 3. They are happy, friendly boys who love cars, trucks, trains and motorcycles. Holden just started Kindergarten and Elliott attends a local preschool part-time. Both boys are fortunate to be included in general education classrooms where they can play and interact with typical peers while receiving special education support, says Andrea.

“There’s a lot of uncertainty with a diagnosis like this. Sometimes there’s just not any answers,” says Andrea.

“But we feel really good now in terms of the services and providers we’ve found, and that has helped us tremendously. Even though we are still facing unknowns, we are doing so with a team.”

Stephen recently joined the Board of Directors for the MECP2 Duplication Foundation, which was founded and is operated by parents of children diagnosed with the syndrome. The organization is dedicated to providing information and support to families facing an MECP2 diagnosis, increasing awareness of the disorder, and funding cutting-edge research to treat and enhance the quality of life of those living with MECP2.

“Part of the challenge parents face is finding resources,” says Stephen. “The foundation supports those efforts. We understand the journey they are on, and work alongside other families, researchers, and medical professionals in the field to provide resources that help families along the way.”