Kathleen Wegener has always been a staunch advocate for her daughter, Kaylee. 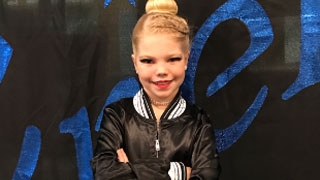 When Kaylee was a newborn and doctors told her she was perfectly normal, it was Kathleen who knew otherwise. “On the third day of life in the maternity ward, I knew something wasn’t quite right,” Kathleen says. “When I fed her, I would see her eyes roll back. She was my first, but I just knew that wasn’t normal.” The nurses told her she was just a nervous first-time mom, but she knew something was wrong with her baby.

At one point, Kaylee turned blue. She was whisked away, and a simple blood test revealed a shockingly low sugar level of 17.

It was Kathleen who — even when Kaylee was discharged after eight days in the NICU without a glucose meter or special instructions and an endocrinologist told her that Kaylee’s labs “looked beautiful” — felt in her gut that something wasn’t right. After being unable to rouse her the day after that all-clear declaration, Kathleen rushed her to the hospital, where Kaylee’s sugars tested at 32 and she had a seizure.

It was Kathleen who, after learning of her daughter’s eventual diagnosis of hyperinsulinism/hyperammonemia (HI/HA) syndrome, insisted Kaylee be seen at the Congenital Hyperinsulinism Center at Children’s Hospital of Philadelphia (CHOP) to be sure Kaylee’s treatment was on target to manage the HI/HA.

HI/HA syndrome is the second most common form of congenital hyperinsulinism, but can be tricky to diagnose, as Kathleen and her husband, Brett, found out, because the child’s sugar levels are drastically impacted by food, especially protein. Depending on when blood is taken for a glucose test, it can show as normal.

At CHOP, Kaylee had an 18-hour fasting test and a protein tolerance test. Her treatment plan includes diazoxide and carbohydrate-loading for all meals. That means she must eat her carbs first, then any protein, to keep her sugars from dropping too low. She checks her glucose at least three times a day; more frequently if she’s sick, excited or extra active.

Kaylee has been seizure free since she has avoided low sugars.

With her HI/HA well managed, Kathleen turned her attention to ensuring Kaylee received all the services she needs at school so she can reach her full potential.

Initially, Kaylee had a 504 plan, to ensure she received the medical care and accommodations she needed at school. In kindergarten and first grade, she had a one-on-one aide to ensure she ate her snacks and carbs before protein during lunch to keep her HI/HA under control. To help out the school staff, Kathleen created a binder that explained HI/HA, described the triggers and signs of low and high blood sugar and what to do, including how to administer glucagon for lows. The binder has a letter for medics, in the event Kaylee would need to be transported to a hospital in an emergency, which gives CHOP’s protocols for treating low blood sugar.

“It was important to educate everyone, including the school nurse, that HI/HA is not like diabetes,” Kathleen says. “Kaylee can, and should, eat carbs and sugar.”

Kathleen is a special education teacher and advocated for Kaylee to undergo psychoeducational testing, which resulted in classifying her as a child with a learning disability (LD).

Kaylee has visual and perceptual problems, making it difficult for her to absorb and copy information from the board. She also has attention deficient hyperactivity disorder (ADHD), making it hard for her to focus and carry out executive function activities such as organizing her school work, getting started on tasks or tackling long-term projects.

Now 10 and in fifth grade, Kaylee has an individualized education plan (IEP). Her LD qualifies her to be placed in a co-teaching classroom. She also receives occupational therapy.

Kaylee is very outgoing and isn’t hesitant to explain her condition and tell her teacher, “I feel a little shaky” when she needs to test her blood sugar, which she’s been doing on her own since she was 5.

“We felt it was important for her to be involved in her own care,” Kathleen says. “When a boy in her class was diagnosed with diabetes, she taught him how to test his own sugars. She’s learning how to pack her lunch with the right foods.”

A teaching assistant oversees Kaylee and her classmate with diabetes during lunch to monitor their eating and make sure Kaylee eats all her carbs first.

“Luckily, her school has been great,” Kathleen says. “We have very good support. I know some families, sadly, don’t have it. My advice to other families is to always remember you are your child’s best advocate. At times it can be a fight to get what your child needs, but don’t give up. Educate yourself on special education laws, and educate your district on HI. Also, early intervention is the key. If you think your child might have some developmental delays, get them evaluated for early intervention services as soon as possible.”

Dancing up a storm

Kaylee loves to dance and participates on several competitive dance teams. She began with tap, and when that was manageable, added lyrical, hip hop and production. Because exercise impacts her glucose levels, she needs a high-carb snack between rehearsals.

“It comes with its challenges,” Kathleen says, “She checks her sugar before she goes on stage and after she’s off the stage because excitement can mess with her sugars.

“We make it work because she loves it so much — it’s her happy place.”