Even before Michael and Michelle Tenen and their 4-year-old daughter, Natalie, stepped foot inside The Children’s Hospital of Philadelphia, they had benefited from the expertise of the Congenital Hyperinsulinism Center.

From the first days of Natalie’s diagnosis of hyperinsulinism/hyperammonemia (HI/HA) syndrome, her doctors back in Orange County, CA, had conferred frequently with CHOP doctors at the Congenital Hyperinsulinism Center, and read articles from CHOP physicians and researchers on the latest treatments.

The Tenens came to CHOP for a series of tests to make sure Natalie’s current treatment plan was the optimal one for her.

“We always wanted to come here to have her tested,” Michael says. “This is the place for HI/HA.”

Delayed diagnosis and complications due to HI/HA 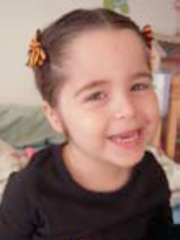 The Tenens’ experience with Natalie’s diagnosis was, unfortunately, not that uncommon.

“When she was about 6 weeks old, when I fed her, I noticed rapid eye movements,” Michelle says. “We went to the ED, but they couldn’t find anything. Every day for two weeks there was something else that looked wrong, so we kept going to the hospital or the pediatrician. Finally, they tested her blood, and she had a glucose level of 10 — extremely low.”

Natalie was started on diazoxide, which controlled her glucose. But her parents believe there was some brain damage during the two weeks she went undiagnosed.

At 3 years old, Natalie started to have infrequent blank stare (or absence) seizures. At 4, she began having grand mal epileptic seizures and was diagnosed with secondary, focal seizures.

She now has an emergency med, Diastat, to stop the seizures before they can do damage, as well as a daily seizure medication to try to prevent or decrease their frequency.

For reasons doctors don’t fully understand, HI/HA patients frequently suffer seizures; some are misdiagnosed as having epilepsy and their condition can go untreated for years.

Natalie has experienced some delays in development. She didn’t walk until 21 months and had delayed speech. Natalie qualified for early intervention services, and receives speech, physical and occupational therapy.

Visit to CHOP and life-long commitment to helping Natalie

The Tenens’ trip to CHOP involved an 18-hour fasting test, an oral protein tolerance test and a video EEG (with electrodes attached to Natalie’s head to monitor brain activity) that ran concurrent with the other tests. The Tenens met with a CHOP neurologist to discuss Natalie’s seizures and to discuss seizure medication options.

The family also contributed DNA to further CHOP HI/HA research. “We’d be happy to join any study that’s appropriate for Natalie,” Michelle says. “The more doctors learn about this disease, the more they can help children like Natalie.”

The Tenens deal with the challenges with positive resolve. They coax their protein-loving daughter to eat her carbohydrates, carry her three medicines at all times and are vigilant about checking Natalie’s blood sugars.

“Like all parents who’ve had a close call, we’re so grateful to have her and see her improve,” Michael says. “We don’t take anything for granted. Natalie is so happy. She really enjoys life and appreciates the small things.”