Jake and Tyler lost their father as young children to heart disease. Enrolled in a program to look for signs of a genetic heart condition, they both found out as teenagers that they were at risk. The recommended lifestyle changes were challenging, but have opened new doors for their family. 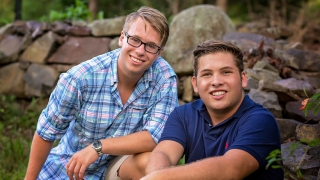 Jake and Tyler’s medical story starts with a tragedy. Their father, Mark, died unexpectedly at the age of 34 while on a business trip. An autopsy found the cause, hypertrophic cardiomyopathy, a condition in which the heart muscle becomes thickened, reducing its ability to circulate oxygenated blood.

Their mother, Jeannine, learned that cardiomyopathy is a genetic condition, and she enrolled both boys in the Familial Cardiomyopathy Program, a collaboration between Children’s Hospital of Philadelphia (CHOP) and Penn Medicine. The program provides care and a range of services to family members known to be at risk of developing cardiomyopathy. Every year, Jake and Tyler went to the Cardiovascular Exercise Physiology Laboratory at CHOP’s Specialty Care Center in King of Prussia, PA, for an echocardiogram and electrocardiogram (EKG).

The tests uncovered no problems when the boys were young, and they went on with their lives with no special restrictions. Both Jake and Tyler grew to love competitive sports, particularly lacrosse.

“Our lives revolved around sports,” says Jeannine. “It was what we did on weekends. From August to March it was hockey, and from March to August it was lacrosse.”

For Jake, lacrosse became a year-round sport. The summer before his freshman year of high school, he was accepted onto two league teams, which meant year-round practices and conditioning, even outside of the spring and summer playing seasons.

At their September 2014 cardiomyopathy screenings, both boys received shocking news ­— the echocardiograms showed changes in their hearts. The diagnosis would need to be confirmed with cardiac MRIs, but their cardiologist, Stephen Paridon, MD, told them to avoid competitive sports until then. The bursts of activity and rapid changes in strain on the heart would increase their risk of heart attack if they turned out to have cardiomyopathy.

Jeannine made appointments for the cardiac MRIs, and the boys (reluctantly) followed Dr. Paridon’s advice. They withdrew from their sports commitments and looked for other ways to fill their time. “We were still hoping it would turn out to be a mistake,” says Jeannine. The boys considered their break from sports to be temporary.

The family went in for their appointment at CHOP a month later for the results. They met with the Familial Cardiomyopathy team. The three remember very different emotions going in for their meeting.

“I was in a daze,” says Tyler. “I wasn’t really expecting any bad news.”

“I was very optimistic,” says Jake.

The MRIs confirmed the diagnosis of hypertrophic cardiomyopathy for both boys. The family would need to follow recommended changes in diet and activity to lower the risk of heart failure. The biggest change — no competitive sports.

“It was like a load of bricks had been dropped on me,” remembers Jake. “I had lots of plans for the future, and they revolved around lacrosse.”

“That visit set us on a new path in life,” says Jeannine. “Both boys felt a profound sense of loss about their athletics.”

The Familial Cardiomyopathy Program offered counseling, which ultimately proved to be helpful, though it took Jake and Tyler some time to appreciate it. “I remember the counselor asking one question,” says Tyler. “‘Who is Tyler?’ I was a hockey player, but the counselor pushed me to find out who Tyler really is. What else I like to do, what are my hobbies and interests.”

“I was ‘too cool’ for counseling at the time,” remembers Jake. “But those questions opened my eyes. ‘Who is Jake?’ ‘What can Jake still do?’”

After they got past the initial shock of the diagnosis, the family came to rely on Kelley Miller, MSN, CRNP, a cardiomyopathy and heart failure nurse practitioner for guidance on suggested lifestyle changes. “She’s been with us on our entire journey,” says Jeannine.

Tyler, three years older than Jake, was in his senior year of high school at the time, and he considers himself lucky on the timing. With preparing for college the following year, he felt like it was a good “transitionary time” to let go of his old hockey-player identity.

“I had a lot more down time,” he remembers. “At first I didn’t know what to do with myself. But I found that my social life improved. I met new people. I ended up enjoying school a little more.” He also had more time to try new things he wouldn’t have before, like joining the chess club and participating in a musical performance.

Jake had a harder time at first. “Being a freshman was already tough,” he says. “It made the adjustment harder. I had been anticipating playing on the same team as my brother for the first time. I was anticipating being recruited by colleges. My friends were from lacrosse. My exercise was lacrosse. It was a very large letdown.”

Both boys found comfort in their community of friends, former teammates and coaches. Even though they were no longer playing hockey and lacrosse, they still felt embraced and looked for opportunities to remain involved.

A breakthrough for Jake came when he was offered a position to coach the third and fourth grade lacrosse team. “I found that was what I was meant to do,” he says. “It got me out of my funk. It was a way back into lacrosse that was huge for me. I loved working with the younger kids, teaching them skills, helping them grow.”

Jake, now 17, is a happy teenager with big plans for the future. He enjoys the outdoors and has developed a passion for nature and a love of hiking. He’s active in his high school’s ecology club, and aspires to become an environmental engineer. Jake also plays on the school’s golf team, a sport he can compete in safely. “As one door closed, ten opened,” he says.

Tyler, now 20, attends Loyola University, where he has developed a love of the arts, movies, music and literature. He is a DJ for the college radio station, where he hosts a classic rock program. He channels his competitive energy into his grades and, during his down time, into video games.

Both boys continue with regularly scheduled cardiac exams. Jake sees Kimberly Lin, MD, a cardiologist in the Cardiac Center at CHOP and Co-Director of the Penn-CHOP Familial Cardiomyopathy Program, for twice-yearly tests. Tyler has transitioned to an adult cardiologist with guidance from the medical team at CHOP. The family continues to consult with the Familial Cardiopathy Program for guidance on fitness and diet, and they use the exercise regimens to keep themselves in shape.

“That first year was really difficult,” says Jeannine. But both boys worked their way through it and have come out the other side with lives that are enriched with new interests.

“And the most important thing is that they are still here. We never lose sight of that.”