"She was wearing a two-piece bathing suit and I just kept saying, 'I can't get it to sit right on her body.' She was crooked."

Gina's pediatrician referred her to an orthopaedic doctor near the Sciaraffo's home in Freehold, NJ, where she was diagnosed with idiopathic scoliosis, a lateral curvature of the spine, which affects approximately half a million adolescents in the U.S.

Gina's spine had a 32 degree curve, literally forming an "S" from the top of her back to the bottom, her mother says. 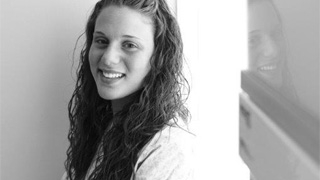 The doctor prescribed Gina a back brace that extended from her chest to her hips.

From age 8 until age 15, Gina wore the brace for 16 to 20 hours a day, seven days a week, and was restricted from athletic activities that her friends enjoyed daily. The goal of the brace was to hold her spine at 32 degrees, but by age 15, a growth spurt accelerated Gina's spinal curve to 45 degrees.

Gina's pediatrician suggested she see John P. Dormans, MD, a world-renowned spine specialist and then-chief of the Division of Orthopaedics at The Children's Hospital of Philadelphia (CHOP).

CHOP is home to one of the most active centers for pediatric spinal care in the world, where expert pediatric spine surgeons, pioneers in surgical monitoring and the top pediatric anesthesiologists in the world form a team equipped to provide high-quality, safe and effective care from diagnosis through recovery.

Though the cause of idiopathic scoliosis is unknown, evidence suggests it is hereditary. Dr. Dormans and scientists from CHOP's Center for Applied Genomics are currently investigating possible genetic causes, where promising efforts are being made in identifying the gene or genes responsible for the disorder's development.

After evaluating Gina, Dr. Dormans met with her family to discuss treatment options.

Without surgery, the curvature and rotation of Gina's spine was on track to progress one to two degrees a year, which would put her at an 85 to 90 degree curve by age 30. A curve of this degree can cause disfiguration and deformity, rotate the chest, and cause heart and lung problems.

Dr. Dormans recommended spinal fusion surgery to straighten and derotate the spine, and brace it with special stainless steel rods and screws to hold it in the corrected position. The surgery took about four hours.

Throughout Gina's surgery, sensors applied to her from head to toe allowed neurophysicists to continuously assess Gina's sensory and motor pathways and nerve roots. The monitoring would alert the team if there was an indication her spine was at risk. CHOP's surgical teams helped pioneer the development of this type of multi-modality monitoring to ensure safety of the spinal cord during surgery.

A state-of-the-art, multidimensional O-arm® Imaging System is another safety aid to assure proper screw placement during spinal surgery at CHOP. It shows clear, real-time images of a patient's body, enabling precise positioning of internal instruments around the spine before continuing on with the surgery.

"Having that information in real-time in an environment where we're all communicating enhances the safety of these complex procedures," Dr. Dormans says. Learn more about safety in orthopaedic surgery at CHOP.

Gina's surgery was a success, achieving a tremendous correction in her spine. Five days after surgery she was discharged from the Hospital. After six weeks, she returned to school and slowly progressed to some light activities.

A year after Gina's surgery her corrected spine is solidly fused. Her height increased about an inch to 5 foot 2 inches, and "now, she's just perfect," her mother says.

"She has absolutely no restrictions whatsoever. None," her mother says. "There isn't a thing that she wants to do that this stops her from doing. She skis, snowboards, swims, rides her bike and is at the gym every day."

Gina adds: "I was fortunate enough to have a great support system through my family and friends and was able to get through the hardest time of my life.

"I look at my experience at Children's Hospital as a blessing," she says. "Seeing what children of all ages have to go through, I can only look at myself and be thankful for how lucky I really am."

Always part of the CHOP family

Now 20 years old, Gina is in her second year at Brookdale Community College in Lincroft, NJ, where she's studying to be a teacher. She finished her first year with a 3.55 grade point average.

Today, her follow-up visits with Dr. Dormans are now few and far between, but her mother says she'll always feel like part of the CHOP family.

"Children's Hospital is an incredible entity," Annie says. "It really is top-notch. The nurses, the Hospital facilities, they gave us every accommodation to make this as easy as they possibly could have for us. The nurses were very kind and very caring. She still feels important when she goes there, even though she's cured and doing really well and continuing an extremely normal life. They still make us feel very important."

Stories like Gina's are made possible in part thanks to generous donations to the Division of Orthopaedics. With your help, we can provide innovative care, pioneering treatments and lifesaving cures to children … today, tomorrow and for years to come.