Everything was going well in Jennifer Falcey’s pregnancy when an ultrasound at 33 weeks revealed a dilation (enlarged area) in her baby boy’s upper intestine.

A Philadelphia resident, Jennifer was admitted to Pennsylvania Hospital, where her OB evaluated the fetus and consulted with physicians at The Children’s Hospital of Philadelphia about the baby’s condition. The two teams established a plan to deliver at 37 weeks and let CHOP handle postnatal care.

But Jennifer’s son Jack had another plan. Two days after she was discharged, Jennifer’s water broke and she was rushed into delivery. Jack was immediately transported to CHOP, where he was evaluated and diagnosed with multiple jejunal atresia, a rare condition that occurs in only 1 in 3,000 live births. 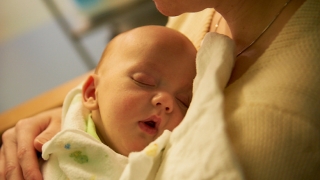 “An atresia is basically an incomplete development,” says Edward J. Doolin, MD, an attending surgeon at CHOP with more than 20 years experience researching and treating this complex disorder. “The bowel (intestine) comes to a stop, there’s a gap, and then the bowel starts again. So everything backs up.”

Jack had multiple blockages in his small intestine: One at the uppermost portion of his intestinal tract, and several smaller, independent blockages which had caused his lower bowel to be cut off completely throughout gestation. His intestines resembled sausage links.

Two days after Jack was born, Dr. Doolin performed surgery connecting the smaller parts of the intestine together. But the dilation from fluid buildup had stretched the diameter of the uppermost portion, preventing immediate repair.

“The picture Dr. Doolin drew for us showed that reattaching that portion of bowel to the rest of the intestines would have been like trying to connect a silver dollar to the head of a nail,” Jennifer says.

In addition, during the surgery Doolin noticed findings that suggested Jack might have cystic fibrosis, an associated disorder that can seriously complicate care. Doolin performed a procedure to reroute Jack’s stomach contents, and ran tests to rule out cystic fibrosis.

After a month and a half in CHOP’s Harriet and Ronald Lassin Newborn/Infant Intensive Care Unit (N/IICU), the dilation had decreased sufficiently and cystic fibrosis had been ruled out, bringing a sigh of relief to Jack’s parents. Dr. Doolin performed a second surgery to connect the uppermost portion of Jack’s intestines to the rest.

For the first time, Jack’s intestines were one continuous system. The N/IICU team’s new goal was to get them working.

“It was kind of scary, but the dietician, the neonatologist and Dr. Doolin put their heads together to try and figure out how to make his intestines start working and growing,” Jennifer says.

After another month and a half in the N/IICU, Jack’s intestines were working well enough for him to be discharged. Though he has less intestines than normal, it is adequate to survive on, and Dr. Doolin says his long-term outlook is good.

The only thing to show for Jack’s two surgeries is a scar on his stomach that looks like a smiley face. He is a happy 9-month-old baby who loves to play with his toes and recently mastered backwards scooting. He started solid foods and is gaining weight daily.

“It’s rare to diagnose this condition ahead of time,” Doolin says. “Early diagnosis prepared us for what is typically a newborn emergency, which enabled us to develop a care plan before birth and operate as soon after birth as possible, and avoid the need for an interhospital transfer.”

Jack has follow-up with the Intestinal Rehabilitation Clinic to monitor his nutrient absorption and intestinal development. These visits — which have gradually decreased in frequency — have become a time for Jack to reunite with a family of clinicians that helped him and his family through a difficult time with determination and positivity.

“The physicians, the nurses … everybody at CHOP was phenomenal,” Jennifer says. “Not only were they taking great care of him, but they were there when I needed a little boost, too. They really made me feel like I was part of the team.”

“We never really gave much thought to CHOP before Jack was born,” Jennifer adds. “But now we are really glad it’s here. If you’re going to go through an experience like that, there couldn’t be a better place to be.”