Diagnosed with juvenile myelomonocytic leukemia, a very rare cancer, when she was just 3½ months old, Coco had several rounds of chemotherapy and a cord blood transplant — all before her first birthday.

The news that their baby had cancer came as quite a shock to Coco’s parents, Ali and Jim. Although Coco had been running a fever, “she didn’t even look sick,” says Ali. “You would have thought she just had a cold. Luckily our pediatrician sent her for blood work and that’s how we found it.”

Ali and Jim talked with doctors at several hospitals about Coco’s treatment options, but after meeting with Nancy J. Bunin, MD, director of the Pediatric Blood and Marrow Transplant (BMT) Program at The Children’s Hospital of Philadelphia, they knew CHOP was the best place for their daughter. More than 1,200 pediatric BMTs have been performed at CHOP, and Bunin is a nationally renowned expert on juvenile myelomonocytic leukemia.

It was a very emotional time for Coco’s family. “It’s hard to explain how I felt,” says Ali. “My heart was broken, but at the same time I really felt confident that Dr. Bunin was going to be able to help her.”

Coco was admitted to CHOP in February to begin chemotherapy. Ali stayed with her during the week, and Jim came on weekends.

“CHOP was our home for a long time,” says Ali. She credits CHOP’s child life team, a group of specially trained professionals who help patients and families cope with illness, with helping her and Coco get through the long days in the hospital.

“They would play with Coco all the time,” she says. “I could go out for a run and they would stay with her and take her to the playroom when she felt good. You could tell they really cared about her.”

Coco had her transplant on March 26, the date her parents now call her “second birthday.” During the transplant, blood-making cells from another baby’s umbilical cord blood were infused into Coco’s tiny body, where they soon began producing new, healthy blood cells to replace the ones that had been destroyed during her chemotherapy treatments. 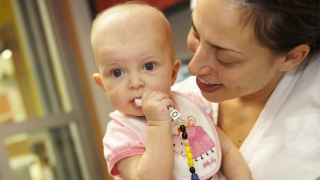 She still has difficulty eating and comes to CHOP once a week for check-ups, but in many respects she is like any other 11-month-old — she enjoys going for walks in her stroller, playing on the swings with her mom, and cuddling with the family dog, Bella.

“I would definitely recommend CHOP to anyone,” she adds. “I just think it’s the best place ever.”