When she was just 6 years old, Taylor used the bathroom at school and was frightened to see that blood filled the toilet bowl. When she came home, she told her mother, Marian, who was worried by the news.

Marian took Taylor to her pediatrician, who believed she had a urinary tract infection and prescribed antibiotics. But over the next few months, the blood reappeared periodically, and Taylor began to experience other troubling symptoms off and on, including stomach pain, vomiting, tiredness and dehydration.

After returning to the pediatrician, Taylor was referred to a nearby hospital, where she was diagnosed with a kidney infection and prescribed antibiotics. Two weeks later, she was back at the hospital with what was thought to be another kidney infection. There, a CT scan finally revealed she had two kidney stones and one was stuck in her ureter — the tube that carries urine from the kidneys to the bladder.

Taylor was referred to a local specialist. Given the small size of the kidney stone — 3 mm by his estimate, about the size of a small grain of rice — the specialist prescribed medication to relax Taylor’s ureter and reassured Marian that her daughter would eventually pass the stone on her own. But the painful symptoms continued and Taylor returned to the hospital with a third kidney infection.

When the specialist still suggested waiting for Taylor to pass the stone on her own, Marian took matters into her own hands. She researched The Children’s Hospital of Philadelphia — just an hour or so drive from her home — and found an entire website and center devoted to pediatric kidney stones.

“It made me feel like I wasn’t the only person going through this,” says Marian. 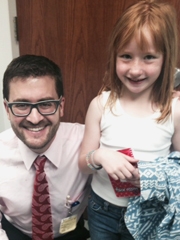 Taylor with Dr. Tasian Once considered an adult health problem, the incidence of kidney stones is on the rise among children and adolescents for a number of reasons, one of which is diet. In response to this increase, CHOP created the Pediatric Kidney Stone Center, a program dedicated to addressing the unique needs of children with kidney stones.

“When I talked with Dr. Tasian, that was the first time someone listened to me,” recalls Marian.

After a comprehensive evaluation, Dr. Tasian and the team discovered the kidney stone was actually 6 mm, about the size of a pearl and twice the size originally thought. Due to the size of the stone and how long it was in the ureter without passing, Taylor underwent a procedure in which a stent — a small, hollow tube — was placed inside her ureter. Next, during an incisionless surgery, Dr. Tasian used a laser to break up the stone and then removed its fragments. Taylor came away from the surgery pain-free and with a unique souvenir: a piece of her kidney stone.

Now 7, Taylor returns to CHOP every six months for follow-up appointments to monitor her kidneys. To prevent the formation of new stones, she drinks more water and eats a low-salt diet of just 750 milligrams of sodium per day.

Even at school or social events, she now reads package labels for sodium content, and if levels are high, she passes on the food. It’s more than most kids her age have to handle, but her mom says Taylor sees it as a small price to pay to be free of the discomfort she was feeling before. And it helps that her whole family is on board with the new diet.

“Taylor has complete trust in Dr. Tasian,” says Marian, noting that a picture of the doctor and Taylor hangs proudly in her daughter’s room. “He knows her and remembers her, which is a huge deal when you’re going through something like this.”

Dr. Tasian and other members of the team are at the forefront of research to understand why the incidence of kidney stones is growing in kids. He recently published a paper on the relationship between daily temperature and stones. The team now is planning to study methods to increase water intake and decrease stone risk, including a smart phone application that sends hydration reminders throughout the day.

“I feel 100 percent confident that CHOP has her care and interest in sight,” Marian says. “From now on, I will not hesitate to go to Children’s Hospital if anything comes up.”