Matthew was just a toddler when it became obvious to his parents, Anne and Gerry Emerick, that their only son was a bit knock-kneed and that his legs were slightly different lengths. Even at that young age, Matthew was already showing a determination not to let the problem slow him down. The toddler didn’t just walk — he ran. 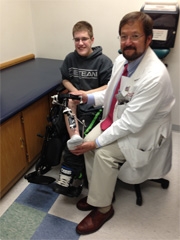 The Emericks wanted the best for their boy, so they took him to see Richard S. Davidson, MD, a pediatric orthopaedic surgeon and renowned expert in lower limb deformities at The Children’s Hospital of Philadelphia.

Dr. Davidson confirmed that Matthew had a condition that causes an irregular angle of growth of the lower legs and uneven length. He told the family the problem would become more pronounced as Matthew grew. At some point, he said, Matthew would need surgery.

Matthew continued to see Dr. Davidson for regular checkups as he grew. It wasn’t until middle school that surgical intervention was needed.

“One day, I was running down a hill with my friends and I felt my leg pop out of my kneecap,” Matthew said. “I fell down and was in a lot of pain. My friends carried me home and my mom came outside and saw me crying.”

At 13, Matthew had his first leg surgery. Dr. Davidson affixed metal plates to the inside of each knee, screwed into the tibia and fibula bones of each shin, to anchor Matthew's knees and prevent a similar injury.

“Dr. Davidson suspected further correction to Matthew’s legs would be needed,” Matthew’s dad recalls. “But we wanted to wait until he’d almost finished growing so the growth plates in his bones were closed or nearly closed.” Growth plates, areas of developing cartilage near the end of long bones, help regulate and determine the length and shape of mature bone.

A device with promise

Matthew was 15 when Dr. Davidson first presented his family with the idea of an orthopaedic surgical device called a multi-axial correcting (MAC) fixator. The fixator would be attached to one leg at a time for six to eight months. At the end of treatment, both legs would be straighter, function better and Matthew’s right leg would be lengthened to match or very nearly match his left leg.

“When Dr. Davidson first talked about the external fixator, I was scared,” Matthew recalls. “But then he brought the device out and showed it to me. I was still cautious, but I was really curious about how the fixator would help me, how it would be connected, and what my legs would be like if it worked the way it was supposed to."

The fixator looks like an elaborate erector set with metal pins, screws and curved plates. The device goes through the skin, muscles and tendons and is surgically attached to the bone in multiple places between the knee and ankle. The pins, screws and plates are connected by an external metal frame with multiple points of adjustment — depending on the needs of the individual child.

Matthew and his family decided to pursue the corrective treatment at CHOP under Dr. Davidson’s guidance. They knew they were in the right place, with the right doctor. Not only does Dr. Davidson have decades of surgical experience treating leg deformities, he also helped develop the specific type of fixator Matthew needed to adjust his legs.

“We know Dr. Davidson really has Matt’s best interest at heart,” Anne says. “He’s always ready to listen to us and will spend time answering any questions we have.”

In April 2012, Matthew had surgery on his left leg. Dr. Davidson cut Matthew’s tibia bone (the shinbone) and attached the fixator. Then it was up to Matthew and his parents to adjust the device by turning a “key” — basically a large wrench — 90 degrees each day, making a 1 millimeter correction to his leg. The process of turning the key and lengthening the leg can cause some pain, which can be managed through medication.

Unlike a traditional external fixator that completely surrounds the leg 360 degrees, the device Matthew had only covered the front and side of his leg.

“With the ring fixator, there’s no place to set the leg down comfortably,” Dr. Davidson said. “With the MAC fixator, it's all on the front [of the leg]. He can lie down on the bed. He can do his exercises. It makes the whole process easier and more comfortable for the patient.”

In November 2012, the fixator was removed from his left leg and Matthew began physical therapy. He spent the winter holidays free of the fixator; in January 2013, he had the fixator attached to his right leg.

“Right now, Matthew’s body is making new bone,” Dr. Davidson said, during a recent checkup at the CHOP Specialty Care Center in King of Prussia. “Every day he turns the key, his body notices there’s another millimeter stretch [in his leg] and it makes new bone. In a week, it makes 7 millimeters, which isn’t a lot — only about a quarter of an inch. But over a month, you’ve got 30 millimeters of bone growth. And in two months, you have two and a half inches.”

In addition to lengthening the leg, the external fixator system helps correct the rotation of the legs.

“This device allows us to stretch the bone, slowly change the rotation and angle of Matthew’s legs, and let them heal in their new straight positions,” Dr. Davidson said. “Now we just have to wait for his bones to heal before we remove the fixator.”

In August 2013, Matthew had surgery to remove the external fixator and began physical therapy.

As Matthew begins his senior year at Downingtown STEM Academy, a magnet high school for youth who excel in science, technology, engineering and math, he is on his feet again. His legs no longer angle out, he’s gotten a bit taller, and he has more symmetry and fluidity in his movements.

Just as when he was a busy toddler, Matthew continues to thrive. He’s busy thinking about his future: studying meteorology at Penn State University, then someday, working for the National Weather Service predicting and forecasting weather patterns.

“I’m really thankful to Dr. Davidson. He’s a great guy and the greatest surgeon I’ve ever known,” Matthew said. “I know my future is brighter because of him.”