At 16, Court was no stranger to the way cancer changes lives. They had lost a sister to the disease, and their mother had been battling recurrences for 21 years.

Court’s own fight began when their mother’s was ending, with knee pain. The athletic, energetic high school junior assumed it was a sprained ligament. They put off going to the doctor to focus on their mom, Crystal.

In the fall of 2011, Crystal entered a hospice, 10 blocks from their home. Court walked there nearly every day. It kept taking longer as the pain became more pronounced. 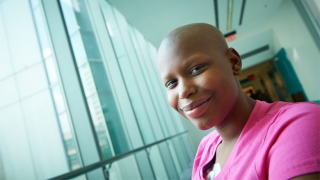 Crystal died on Christmas, at age 41. While grieving, Court realized the knee pain had become severe. Within the week, Crystal’s friends took Court to Children’s Hospital of Philadelphia (CHOP), where an MRI revealed a mass. Then bone biopsy showed Court had osteosarcoma, a malignant tumor.

Often, a cancer diagnosis brings not only grief and worry, but also shock. Court felt sadness but no surprise.

“Before I heard the news I was trying to be positive, but I knew my family history,” Court recalls.

In 2006, Court’s sister, Christina, had been diagnosed with a brain tumor at CHOP at the age of 16. The doctors took careful note of Crystal’s history: breast cancer at 19 and a soft tissue sarcoma at 35. “That’s when we started to put the pieces together,” Court recalls.

The family — Court, their younger brother, Reggie, and their mom — met with Kim Nichols, MD, a CHOP oncologist who is a nationally renowned researcher into conditions that predispose children to cancer.

Genetic tests provided the answer as to why this terrible disease kept striking the family: Court’s mom had Li-Fraumeni syndrome, a rare condition caused by alterations in TP53, a very important tumor suppressor gene. Court also had the syndrome; Reggie did not.

Half of individuals with Li-Fraumeni will develop cancer by age 45, with tumors beginning in childhood and adolescence. Court has begun preventive monitoring in an effort to detect tumors at the earliest and most curable stage.

Court was 13 when Christina died. It was three years until the knee pain began. Looking back, Court regrets not seeing a doctor sooner. But the pain initially mimicked a previous sprained knee ligament. And helping Crystal at end of life had consumed all of Court’s energy.

When Rochelle Bagatell, MD, the oncologist who directs CHOP’s Solid Tumor Program, explained the tumor was malignant, Court silently questioned whether to fight. Then they thought of Reggie. They had grown up knowing cancer as part of their mother’s life.

“We never saw Mom cry,” Court recalls. “She tried her hardest to keep us sheltered from it.”

The sibling bond grew even stronger in losing their sister and mother.

“When my mom passed away, my brother and I were ready because she prepared us so well and taught us to take care of ourselves,” Court says. “I don’t know how she did it. I guess it’s just something moms know.”

'Fight for my life'

For Reggie’s sake, Court decided to focus on hope as they faced the diagnosis. “Anything in the world that I need, Reggie will do it for me, and he deserves the same from me,” Court says. “I had the realization that I had to fight for my life. I wanted to keep going for my brother.”

The next weeks brought great news: The cancer hadn’t spread to Court’s lungs.

Court and their caregivers had meetings with numerous teams, including Dr. Bagatell; Abby Green, MD, who would become Court’s primary oncologist; and John P. Dormans, MD, then-chief of the Division of Orthopaedics, who is world-renowned for limb-sparing surgery for children with bone tumors.

In most cases, Dr. Dormans and his team can replace diseased bone with a metal endoprosthesis, or even bones from other areas of the body, instead of amputating.

On Jan. 26, a month after Crystal died, Court was admitted to CHOP to begin chemotherapy. The tumor, in the proximal tibia (shin closest to the knee), began to shrink. On April 10, Dr. Dormans removed part of Court’s femur (the large bone in the thigh) and tibia, drilled holes in the ends of the remaining portions, and placed metal bones and knee.

Court went through five more months of chemotherapy as well as rehab with physical therapists. By August, Court was walking the halls of the Main Hospital’s oncology floors without crutch or brace. It was a welcome sight for staff, many of whom first got to know Court during Christina’s treatment.

“Sometimes I feel like this is my home now,” Court says of CHOP. “I know if I need anything, there is someone on this floor who will do it for me. CHOP has done so much for me, it’s unexplainable. Everyone is there for you. You build a family.”

An end to chemo; beginning of new life chapter

Court finished chemotherapy in the fall of 2012.

After nearly a year in the hospital, Court finished high school and received a scholarship to St. Joseph’s University, and in 2018 became the first member of their family to graduate college. Reggie following shortly after with a psychology degree from Drexel University with an interest in research related to trauma in children. This May, Court was accepted with a partial scholarship to one of the best graduate schools in the country, Bryn Mawr College, to become a social worker for children with cancer, hopefully at CHOP.

Through everything, Court and Reggie have been supported and cared for by friends of their mother’s and family, with help from many others. “There are so many people in the world who love me,” Court says. 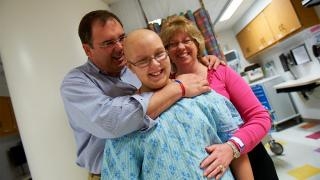