Without the fetal surgery experts at Children’s Hospital of Philadelphia, Addison wouldn’t be here today. That experience inspired the Kelly family to give back, with the goal of helping other families get the same exceptional care that saved their daughter.

In November 2006, when Mary Kelly was 26 weeks pregnant with her daughter Addison, a routine ultrasound alerted her obstetrician that something wasn’t right.

She was sent to a perinatologist who said that Addison was very sick: she had a large mass in her chest that was causing fetal hydrops, a dangerous accumulation of fluid that could be life-threatening. 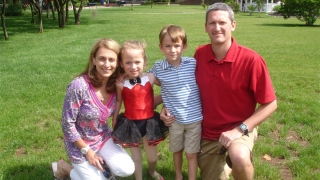 The Kelly family in 2012: Mary, Addison, Christopher and Jed. The mass had flattened Addison’s heart, causing fluid to back up in the blood vessels. This fluid leaked everywhere in her body, and as a result, she was twice the size she should have been at that stage of the pregnancy.

“The doctor told us, ‘If there is anything that can be done for this baby, it can be done at CHOP. You need to get there immediately,’” recalls Mary.

Mary and her husband, Jed, traveled from their home 90 minutes away in northern New Jersey to The Children’s Hospital of Philadelphia. At CHOP, Mary was evaluated by a multidisciplinary team of specialists in the Center for Fetal Diagnosis and Treatment.

“As scary as what was happening was, we really felt like we were in the right place,” says Mary.

After a thorough evaluation, including an ultrafast fetal MRI and level IV ultrasound, the team met with the Kellys to explain the diagnosis and discuss the options for treatment, which were few.

A tumor between Addison's heart and lungs

The team explained that Addison had a large mediastinal teratoma, a tumor in the middle of her chest between her heart and lungs. This tumor was causing her to go into heart failure.

The Kellys could terminate the pregnancy; they could do nothing, which could compromise both Mary’s and her baby’s health; or they could undergo fetal surgery to remove the tumor, giving Addison a 50-50 chance of survival.

They opted for fetal surgery. "I couldn't believe that they could do that kind of thing," says Jed.

Two days later, a large multidisciplinary team, led by Surgeon-in-Chief and Director of the Center, N. Scott Adzick, MD, successfully removed Addison’s tumor while she was still in the womb. Mary and her daughter were the second documented mother and child at CHOP (and in the world) to undergo fetal surgery for this type of condition.

The surgery went well, and the plan was to allow Addison to develop for 10 more weeks before delivery. After being discharged, Mary stayed on bed rest close by in Philadelphia. But less than two days later, she went into premature labor. 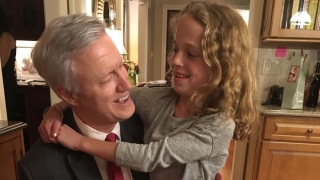 Addison with Dr. Adzick just before her 10th birthday. During that time, the Kellys were in and out of hotels, making regular trips from their home and relying on extended family to look after their 19-month-old son, Christopher, so they could be by Addison’s side every day.

Addison went home for the first time two weeks before her first birthday. The first few years at home weren't without challenges, but even being ventilator-dependent at first would not slow her down.

"I think she was very motivated by her big brother," says Mary. "She just wanted to do what he was doing."

Today, Addison is a happy, social and playful 10-year-old. Her favorite activities include swimming, playing softball, ice skating, yoga and riding her bike. She loves animals and her favorite subject is math.

“Addison is a beautiful girl with so much spirit and determination, and clearly a strong will to live!” says Mary. “She would not be here if we had not gotten to CHOP.”

Sharing hope with other families

While the experience put an enormous strain on the Kelly family, they were fortunate to have the support and resources to do what they needed for their daughter. But they know many other families in their position do not.

To help those families, they created the Addison’s Hope for Fetal Families Fund. The fund helps families access the world-class services of the Center by paying for things insurance will not, such as travel costs, lodging, meals and other expenses related to getting to and staying in Philadelphia during evaluation, treatment and recovery.

“This fund supports the families so they can support their children, because that’s a big part of what helps these babies recover,” says Mary.