During Kellan’s treatment for an aggressive brain cancer, he was having a session with CHOP yoga therapist Tonia Kulp, MS, C-IAYT. She explained what a mantra was, and how he could use one in tough times to center himself. Kellan picked a card that said: Today I choose happiness.

“From that moment, that’s what he did,” his mother Kristin says. “No matter what he was facing, he chose happiness.”

Sadly, Kellan’s medulloblastoma spread from his brain to his spine at diagnosis and then to his bones. He died at age 5, 10 months after his diagnosis, despite a successful surgery to remove the initial tumor, proton therapy, radiation and chemotherapy.

What helped Kellan — and by extension his family — through his final six months were the Integrative Health Program therapies of yoga and mindfulness from Kulp, acupressure from Doug McDaniel, DACM, LAc, and massage from Tiffany Silliman Cohen, LMT,CPMT, BCTMB — all overseen by Integrative Oncology Program Director Tracey Jubelirer, MD. 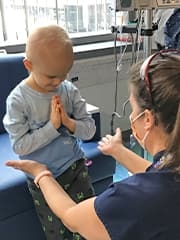 “Tonia and Doug, especially, were integral to Kellan getting through the tough days,” Kristin says. “I call it the power of the dynamic duo. They were like miracle workers. Kellan connected with them on another level.”

Early on, Kulp would lead Kellan in adaptive yoga sessions with a strong emphasis on focus and mindfulness. As his cancer progressed and physical yoga was no longer possible, the sessions were all about relaxation and mindfulness as Kulp would guide Kellan to imagine himself in a happier place.

“One session he was in bed and in pain, and Tonia said, ‘Let’s go on a trip to the beach. … See the shell in the sand?’ And Kellan said, ‘No. It’s a hermit crab.’ That’s how effective it was — he would truly be in a different place, and he had a blast with it,” Kristin says.

Kristin, who also absorbed the sessions’ lessons, would help Kellan use the techniques at home. They became second nature to Kellan, who once told his mother — who was having a rough day — “close your eyes and take a deep breath, Mommy. Just breathe.”

McDaniel gained Kellan’s trust and was able to help relieve some of the bone pain, nausea and other side effects from treatment with acupressure. As the cancer moved into Kellan’s bones, causing acute pain, he would ask for McDaniel by name. “Doug was so strategic on where he would place his hands,” Kristin says. “He was able to read Kellan, and it brought him such peace.”

Through it all, Kellan kept his bright, fun-loving personality. He played minigolf — one of his favorite activities — and kept up with karate. He enjoyed a behind-the-scenes visit to the Elmwood Zoo, when he was allowed in the red panda pen. With the intense coordination from the Cancer Center and a private plane ride, courtesy of a generous local company, he was able to go on a short family vacation to Disney World. He did choose happiness.

Once Kellan became terminal and he shifted from treatment to palliative care, additional CHOP staff joined the team to make him as comfortable as possible.

Therapeutic massage helped relieve his constipation from the 24/7 pain medications. Lavender “sniffies” from aromatherapy encouraged calmness. The dinosaur and koala bear “warming guys” — stuffed animals that can be heated up in the microwave — brought comfort to his aching joints.

Psychologist Branlyn W. DeRosa, PhD, worked with Kristin and her husband, Mike, in addition to Kellan. Dr. DeRosa helped the parents develop the vocabulary to talk about what was happening and how to express their emotions in a healthy way.

“Under Dr. Brandy’s direction, we had ‘playtime with Kellan’ when he could dictate the play,” Kristin says. “It taught us how to give him control. The biggest thing was to give Kellan some control over something small when he had no control over the disease.”

The Pediatric Advanced Practice Team (PACT) was a resource for the family as Kristin and Mike struggled with end-of-life decisions. PACT art therapist Jennifer Lemisch, MA, ATR-BC, LPC, came to their home especially to work with Kellan’s older brother, Parker, 9, so he would have the tools to better deal with his brother’s illness and death.

“Kellan had multiple teams at CHOP,” Kristin says. “The Cancer Center team fought the cancer, and the Integrative Health team supported Kellan’s whole self and symptom management while the PACT team helped Kellan in other meaningful, joyful ways, especially with his pain management. His death was so peaceful. His suffering was over.” 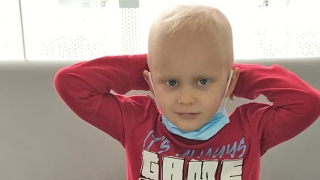 Even before Kellan died, his parents started to make plans for a foundation that would honor his memory and happy spirit. “When he knew he was going to die, he wanted to make sure his affairs were in order. Yes, he was only 5. We said we would help his friends who were sick, too, and we would carry on his fight would continue to ‘choose happiness,’” Kristin says.

The Kellan Ford Foundation aims to give families facing similar heart-wrenching circumstances the tools that were so helpful to Kellan and his family — and to create even more.

One focus of the foundation is to foster holistic cancer care by creating Happiness Boxes for kids with cancer that include items that gave Kellan so much comfort: a red panda “warming guy” and aromatherapy sticks, along with education for parents. Kristin is consulting with Dr. Jubelirer and the team to determine the exact contents.

Another focus is pediatric cancer research, with the aim of improving outcomes for children with medulloblastoma and other cancers. The final goal is to create a special room at CHOP for terminal patients and their families that choose for the child’s death to be at the hospital. The family has been in consultation with PACT and the CHOP Foundation about the possibility of creating an end-of-life room that would be more soothing to the child and accommodating to families than a typical hospital room.

“The mission of the foundation is led by Kellan and his experiences,” Kristin says. “We have so much gratitude for everyone at CHOP and for the amazing ways they helped Kellan and our whole family.”