Patrick had developmental delays as a baby, but it wasn’t until a health crisis brought him to Children’s Hospital of Philadelphia (CHOP) at 3 years old that he was diagnosed with mitochondrial disease. After seven years of being cared for at CHOP, his parents have become leading advocates for mitochondrial disease and committed supporters of the team’s research into advancing treatment options for his disease. 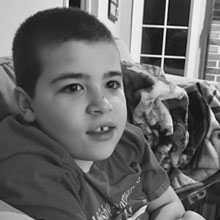 Patrick was a relatively healthy baby for his first few months of life. But at 9 months, his parents, Carrie and Eric, started noticing delays in his motor development. He couldn’t sit up without bracing himself with his arms, and he wasn’t making efforts to crawl.

The family arranged for early intervention services to provide therapy for Patrick. While it helped somewhat and he did make slow progress, Patrick remained behind schedule for his developmental milestones. By the time he was 3, he could walk without support, but still wasn’t speaking. Patrick’s doctors couldn’t find a reason for his developmental delays.

A new set of problems began to emerge. When Patrick got sick, even with what seemed to be a mild cold, he would become very lethargic. “His skin would get pale and he looked like he was going to pass out,” Carrie remembers. One particularly alarming incident around his third birthday landed him in the local emergency room. The doctors thought it might have been a seizure, and suggested he undergo evaluation by a neurologist.

That led the family to Children’s Hospital of Philadelphia (CHOP), not far from their home in southern New Jersey. A brain MRI with spectroscopy (MRS) showed high levels of lactate in Patrick’s brainstem. They were referred to CHOP’s Metabolic Disease Program, where they met with Marni Falk, MD, an attending physician with special expertise in mitochondrial disease. Dr. Falk is now Executive Director of CHOP’s Mitochondrial Medicine Frontier Program, which had not yet been formed at the time.

It was the first time Carrie and Eric had heard of the condition. Mitochondrial disease is a condition in which mitochondria — which function as the batteries to produce energy in cells — don’t function correctly. Depending on which cells have low-functioning mitochondria, the disease can cause a wide range of health problems, including fatigue, weakness, exercise intolerance, developmental disabilities, seizures, strokes, vision or hearing loss, growth and feeding difficulties, hormone imbalances, and serious problems with heart, liver or kidney function.

Dr. Falk ordered an array of blood and urine tests to better understand the cause of Patrick’s problems, including several types of genetic tests. One of the tests showed a variant in Patrick’s mitochondrial DNA, but it was not conclusive enough to provide a definite diagnosis.

Six months later, Patrick woke up one morning unable to walk. He would try, but kept falling down. When he crawled, he dragged his left leg. Doctors at the local emergency room suggested they take him to CHOP. Just as they were approaching CHOP’s emergency entrance, Patrick started having seizures.

An EEG showed that he was having constant seizures, and an MRI showed that he was having a metabolic stroke, in which the brain is starved of energy due to low metabolic activity. Patrick was moved to the Pediatric Intensive Care Unit (PICU) while the medical team worked to get his seizures under control and figure out what was causing the problems.

Physicians from the Metabolic Disease Program determined that Patrick’s symptoms resembled MELAS syndrome (mitochondrial encephalopathy, lactic acidosis and stroke-like episodes). They started Patrick on arginine, an amino acid that helps increase nitric oxide levels that relax the blood vessels and improve blood flow in the brain, which has continued to be an important part of his medical treatment ever since.

After a week, when Patrick’s seizures were under control and he awoke from sedation, he had lost all of his gross motor skills. He couldn’t even hold up his head. For the next three months, he stayed at CHOP for intensive therapy, gradually regaining the abilities he had lost.

Genetic tests lead to a diagnosis 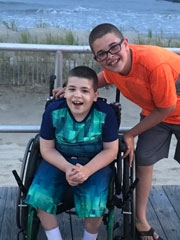 Not long after Patrick returned home from the hospital, Dr. Falk contacted Carrie and Eric to let them know she had a diagnosis for Patrick’s underlying condition. One of the genetic tests, looking at nuclear DNA, had revealed he had two disease-causing variants, one inherited from each parent, in the POLG nuclear gene. When no normal copies are present of the POLG  protein, which functions to both copy and proof-read errors in mitochondrial DNA, a severe form of mitochondrial disease results, known as Alpers (or Alpers-Huttonlocher) syndrome.

A muscle biopsy confirmed that Patrick had about 18 percent of the normal level of mitochondrial DNA in his skeletal muscle. Since mtDNA encodes essential components of the energy-generating system, this meant that his muscles were running on less than one-fifth of the energy that they would in a healthy body.

Alpers disease is a severe and often progressive multi-system condition, with no known cure. But with a confirmed diagnosis, Dr. Falk was able refine Patrick’s treatment. She started him on a combination of supplemental vitamins called a “mito cocktail,” and he had a G-tube placed to supplement his nutrition and support his growth.  She also warned them to avoid a specific seizure medicine, valproic acid, that could provoke liver failure in patients with POLG disease.

Specific information like this will help physicians and research scientists to work toward developing better methods of diagnosis and treatment, and ultimately, to reach the goal of a cure for mitochondrial disease.

Patrick is 10 now, but has the functional abilities of a 4-year-old. He is in school, a special program geared to his needs, and is able to participate. He has no words, and uses a picture exchange card system (PECS) to communicate. “He’s a happy kid,” says Carrie. “He can be very silly. He’s a big snuggler. He loves hugs and kisses.”

Patrick had two more metabolic strokes when he was 8. He was put into a medically induced coma after the first one, and his medicine regimen was adjusted to reduce the risk of future incidents.

He continues to see Dr. Falk and a number of other specialists at CHOP on a regular basis. Key member of his team include Shana McCormack, MD, an attending physician with special expertise in endocrine problems in mitochondrial diseases, and Zarazuela Zolkipli Cunningham, MBChB, MRCP, an attending physician with special expertise in neuromuscular problems. It was through this multi-specialist team care approach that he was found to have adrenal insufficiency, itself a potentially life-threatening problem at the time of stress that can be managed if known.

“Having people who are so knowledgeable has made all the difference,” says Carrie.

“There is such coordination of care at CHOP, and such interest in mitochondrial disease. We’re big supporters of the research they are doing. And we feel very lucky to have them for Patrick. I can’t say enough about what they have done for him.”