At a routine ultrasound at 18 weeks’ gestation, Anna learned frightening news about the fraternal twins she was carrying. Her OB detected that one of the twins, Eliana, had a rare, potentially life-threatening birth defect.

The defect, called omphalocele, was causing Eliana's abdominal organs to protrude out of her abdomen into a thin membranous sac.

The physician referred Anna to the Center for Fetal Diagnosis and Treatment (CFDT) at The Children’s Hospital of Philadelphia (CHOP), an internationally recognized leader in fetal diagnosis, surgery and care. The CFDT sees between 30 and 50 cases of omphalocele each year, making it the most experienced team in the world when it comes to diagnosing and treating this rare condition.

During a comprehensive, one-day evaluation, the Center’s multidisciplinary team confirmed the diagnosis and met with Anna and her husband, Bill, to discuss the plan of care.

“It was scary, but we put our trust in the CHOP doctors and knew that they knew what was best for me and my children,” Anna says.

The team explained that the rest of Anna’s pregnancy would be closely monitored, with regularly scheduled ultrasounds at the CFDT. The twins would be delivered in the Garbose Family Special Delivery Unit, the world’s first birth facility designed exclusively for pregnancies complicated by birth defects. And then surgeons would correct Eliana’s defect after birth.

But during an prenatal appointment at 32 weeks, it was discovered that Eliana’s amniotic fluid was very low, she was not growing normally, and she was undergoing fetal distress.

The Center’s team quickly mobilized to deliver the twins by emergency C-section. Eliana and her sister, Angelina, were born 8 weeks premature, weighing a little more than 5 pounds combined. Eliana was the smaller twin, weighing a mere 1.6 pounds.

The girls were then whisked just a short walk away to the Harriet and Ronald Lassin Newborn/Infant Intensive Care Unit (N/IICU). The 95-bed, state-of-the-art facility provides the full spectrum of specialized, multidisciplinary intensive care services for newborns and infants as young as 23 weeks’ gestation and as small as one pound at birth.

Angelina was discharged home after five weeks in the N/IICU, but Eliana spent nearly three months there.

With an immature digestive system and trouble coordinating the sucking, swallowing and breathing necessary to breast or bottle feed, Eliana struggled to gain weight and had to be fed through a tube.

After 10 weeks, Eliana was strong enough to undergo surgery to correct her omphalocele. N. Scott Adzick, MD, surgeon-in-chief at CHOP and director of the CFDT, placed her organs where they belonged in her abdominal cavity, closed the hole in the abdominal wall, and even crafted a belly button for Eliana.

Two weeks later, she was finally discharged home, but her feeding troubles continued.

“She always fussed a little with bottles,” says Anna, which made sense when Eliana was diagnosed as lactose intolerant. “But when we switched to baby food I had difficulty getting her to eat. She would vomit with spoon feedings, her gag reflexes were really bad, and her mouth was very sensitive and weak.”

After three years of working with feeding therapists and very little improvement, Eliana was referred to CHOP’s Pediatric Feeding and Swallowing Center, where an interdisciplinary team of specialists offers a comprehensive, family-centered approach to feeding issues.

The team put her back on a feeding tube for three months until she gained enough weight to be admitted to CHOP’s Day Hospital Intensive Feeding Program, a program where specialists help change eating behaviors and provide occupational and speech therapy.

During her stay in the Day Hospital, Eliana gained more than 7 pounds. Many children with feeding difficulties learn to associate feeding with discomfort and avoid it even after the discomfort has been treated, so the Day Hospital staff taught Anna how to feed Eliana at home using a structured behavioral protocol to change the negative patterns she had developed.

Thanks to this total team effort, today Eliana is 3½ years old and weighs only 5 pounds less than her twin sister.

“She’s still underweight, but she looks so much better than she did six months ago,” says her mom. “The doctors at CHOP are very happy with her progress.” 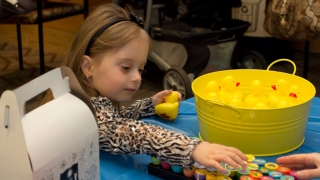 Eliana still has a hard time with eating, but is very willing to try new foods, tastes and textures. And if the family cannot do a structured meal, she is happy to eat at the table with them and sits for almost the entire meal. The goal now is to get her off pureed food and on a solid food diet, so her CHOP feeding and occupational therapists — whom she sees twice a week — are working on chewing, swallowing and oral motor skills.

“CHOP has been great. All of the doctors have been incredibly helpful,” says Anna. “Eliana still has a long way to go, but to see the progress she’s made is amazing. We’re very happy. Every day is a new day to learn and grow, and that is exactly what she is doing.”

Philanthropic gifts are vital to making breakthrough stories like Eliana's a reality. With your support, we can provide innovative care, pioneering treatments and lifesaving cures to more children — today, tomorrow and for years to come.