Latanya knew something was wrong with her daughter Mikayla. The 10-year-old had been suffering from occasional headaches, and other unusual symptoms.

After an appointment with a nephrologist, Latanya brought her daughter to The Children’s Hospital of Philadelphia, where an MRI revealed that Mikayla had a pediatric brain tumor.

Doctors monitored the tumor closely, performing an MRI every couple of months. 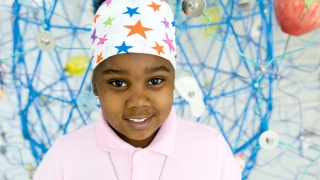 “We came in one time and it hadn’t grown at all, then the next time it had,” says Latanya. In the spring of 2010, doctors biopsied the growth. It was a germinoma, a cancerous tumor that can usually be cured with radiation therapy.

Mikayla’s oncologist, Michael Fisher, MD, recommended proton therapy, an advanced form of radiation available through the Cancer Center. Proton therapy is able to target radiation directly at a tumor site while minimizing damage to nearby healthy tissue — and greatly reducing the risk of acute and long-term side effects. This precision is especially important for young children like Mikayla, whose bodies are still developing and who are especially susceptible to the damaging effects of radiation.

CHOP proton patients receive their treatments at the Roberts Proton Therapy Center, a 75,000-square-foot facility in Penn Medicine’s Ruth and Raymond Perelman Center for Advanced Medicine. The Roberts Center is the first proton facility in the mid-Atlantic region and the only one in the nation that was designed with a pediatric focus from the start.

Mikayla was one of the first pediatric patients to be treated at the Roberts Center. She had five weeks of treatments, and other than a bit of fatigue, “she didn’t really have too many side effects at all,” says Latanya.

Mikayla still comes to CHOP often for follow-up, and Latanya says she wouldn’t take her daughter anywhere else.

“It’s just the best place,” she says. “Everyone goes above and beyond. You have to reprogram your children once they come home because they’re so spoiled."