At age 6, John is already quite the athlete: He scored three goals in a soccer game this summer. What’s remarkable is that his big game came soon after he had an innovative procedure to seal the leaks in his lymphatic system that were holding him back from being active.

At her 22-week ultrasound, Gina found out that her unborn son had hypoplastic left heart syndrome (HLHS), a severe congenital heart defect in which the left side of the heart is underdeveloped.

Gina and her husband, Kyle, were initially stunned. They learned that a staged series of three reconstructive surgeries could be performed to correct the problem. The family lived in Pleasant Hill, Iowa, at the time, and traveled to Iowa City for their baby’s delivery, at University of Iowa Stead Family Children’s Hospital.

As soon as he was born, their son, John, was taken to the hospital’s neonatal intensive care unit. Two days later, he was moved to cardiac intensive care. He had his first heart surgery when he was 6 days old. The operation, called the Norwood procedure, ensures that enough blood is reaching the lungs to keep the child alive until the second procedure.

Soon after the procedure, John’s doctors detected fluid build-up in his chest around his lungs. He had a condition known as chylothorax, in which fluid leaks out of the lymphatic system and collects in the chest. It is a serious but not uncommon problem after heart surgery. The fluid around his lungs was making it difficult for John to breathe.

His medical team responded quickly, draining the fluid with chest tubes and putting John on a special low-fat formula until the fluid diminished. The team was able to transition John to skimmed breast milk, using a centrifuge to remove the fat and testing its calories with a creamatocrit machine.

John was 6 weeks old and tube-free when he came home from the hospital after the Norwood procedure. Once he could tolerate fat in his diet, he no longer needed skimmed breastmilk. “He was such a happy baby,” remembers Gina.

At 5 months old, John had the second of the three reconstructive heart operations, the Glenn procedure, which redirects the flow of blood from the upper body to the lungs without passing through the heart. Again, John developed chylothorax after the surgery. The team reinitiated the skimmed breast milk diet, which eventually reduced the accumulation of fluid to the point where the tubes in his chest could be removed.

At age 3, John had the third and last of the planned heart surgeries, the Fontan procedure, which completes the rerouting of circulation from the body to the lungs without passing through the heart. Once again, he developed chylothorax and was treated with a fat-free diet.

After the Fontan procedure, John’s recovery was slow and he had a series of setbacks. He would get sick and have no energy, and his oxygen saturation levels were dropping instead of improving. He was hospitalized six times over the next few months.

“You could hear him breathe,” remembers Gina. “There was a crackly sound. He was coughing a lot. He was a very lethargic kid.” John went on like this for several months, through the winter and spring. He was well enough to go to school, with some absences. But his condition was worsening over time.

Chest X-rays showed no fluid build-up around John’s lungs, so the problem didn’t appear to be a lymphatic leak resulting in a pleural effusion. One of his cardiologists told the family to watch for bronchial casts when he coughed. These rubbery or caulk-like plugs can be a sign of lymphatic fluid leaking inside the lungs. This was the clue that led to the breakthrough for John. He did begin to cough up casts, and was diagnosed with plastic bronchitis, a lymphatic flow disorder that causes severe respiratory issues. In children with plastic bronchitis, lymph fluid builds in the airways and forms casts. These casts block the airways, making it difficult to breathe.

Nine months after the Fontan procedure, John’s doctors used a cardiac catheterization procedure to reduce the pressure in the blood flow between his heart and lungs. That helped, but didn’t eliminate his problems. Eventually, the casts came back.

An innovative treatment at Children’s Hospital of Philadelphia

John’s cardiologist told the family about a new treatment for lymphatic leaks that was having great success in Philadelphia.

The Jill and Mark Fishman Center for Lymphatic Disorders has treated hundreds of adults and children with lymphatic leaks and lymphatic flow disorders, making it the largest and most active treatment program of its kind in the world. Yoav Dori, MD, PhD, a pediatric cardiologist at CHOP, pioneered a nonsurgical procedure to locate and close leaks in the lymphatic system.

The center uses dynamic contrast MR lymphangiography (DCMRL), an advanced lymphatic imaging test, to map out the anatomy of the central lymphatic system and determine the location of the leaks. Doctors then perform a minimally invasive procedure to reach the sources of the leaks and then seal them with a special glue. When the leaks are closed, the lymphatic system responds by building new pathways for fluid drainage back into the venous system.

John’s cardiologist contacted Dr. Dori at CHOP, and the two teams worked together to bring John to CHOP for care. John and his parents arrived at CHOP in June 2017.

When Dr. Dori did the MR lymphangiography, he found that John’s entire upper chest was perfused by abnormal lymphatic flow.

“He was excited to do things again” 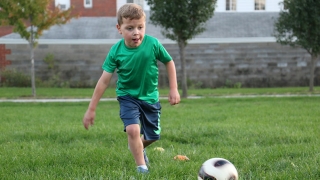 John’s parents immediately noticed a difference in their son. “He could sleep through the night without coughing,” says Gina. “His cough had been like white noise in the house, and it was gone. He hadn’t had much of an appetite before the procedure, and now, he would wake up hungry. He was excited to do things again. The procedure really changed his life for the better. All of our moods have improved.”

Gina credits the collaboration between the two hospitals with John’s positive outcome.

“Everyone was working together to do what was best for John. That collaboration cultivates trust and respect in the doctor-parent relationship.”

Now 6, John is an active little boy who likes to do anything his big brother does. Soon after he got home from Philadelphia, he rejoined his soccer team, the Ducks, and in one game scored three goals. “His grandparents went to a soccer game with us,” says Gina. “We were all just so proud of him.”