Alivia is a spitfire. At 2½ years old, she has a gift for making everyone around her laugh. She is rebounding from a little-known allergy that was diagnosed, treated, and is now being monitored at the Food Allergy Center at Children’s Hospital of Philadelphia (CHOP). 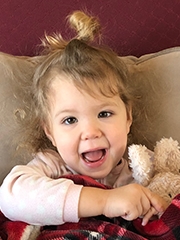 When Alivia was born, her parents, Andrew and Elisabeth, hoped she would never have to deal with a serious food allergy, as her older brother Ethan and sister Adelaide do. But at 10 months old, Alivia developed a troubling set of symptoms. She became lethargic and began vomiting frequently, sometimes with blood, and a large amount of blood was showing up in her stool.

Alivia was diagnosed with intussusception — a bowel condition in which the small intestine folds and telescopes inside of itself. Often, the condition will naturally correct in infants, and in Alivia’s case it did. However, while the intussusception cleared up, some of Alivia’s symptoms did not.

“It was the intussusception that triggered us to pay closer attention to her bowels,” explains her mom, Elisabeth.

Alivia was still showing signs of blood in her stool. Her parents took her to see their pediatrician, who began monitoring and testing her stool for blood over a three-week period. When Alivia's symptoms persisted, the pediatrician recommended that the family take her to see a specialist at a local hospital or Children’s Hospital of Philadelphia.

The family had a long and trusted relationship with CHOP. Both of Alivia’s older siblings were diagnosed and treated for asthma and food-related allergies at CHOP. They were being monitored by Terri F. Brown-Whitehorn, MD, an attending physician in the Food Allergy Center, Allergy Program and Integrative Health Program at CHOP.

“We were at our wits end because we had hoped she would be healthy," Elisabeth says. "But she was having more issues, and bleeding, and we didn’t know why. We went to CHOP because we were so pleased with how they'd treated our other kids.”

The family met with Paul J. Ufberg, DO, MBA, a gastroenterologist at CHOP Specialty Care, Lancaster, near their home. Dr. Ufberg suspected that an allergy might be the source of Alivia’s symptoms and collaborated with Dr. Brown-Whitehorn on her care and treatment plan.

Because there was a chance Elisabeth's breast milk was triggering her daughter's symptoms, Dr. Brown-Whitehorn recommended that Elisabeth remove common "trigger" foods — such as cow's milk, soy, rice and oats — from her diet so they wouldn't travel to the baby. Elisabeth was committed to nursing her daughter instead of switching to formula, so she made the diet changes, and Alivia's symptoms improved. Although this approach worked well for Elisabeth and Alivia, not all breastfeeding moms need to restrict foods in their diets. Recommendations are made based on patient’s history.

When Alivia was 11 months old, a new problem emerged: She refused to eat solid foods and was resistant to weaning from her mother’s milk. Elisabeth worried her growing daughter wasn't getting enough nutrients.

Dr. Brown recommended the family consult the Pediatric Feeding and Swallowing Center at CHOP’s Main Campus. The hope was that by having clinicians observe how Alivia interacted with food and assess her reluctance to eat solid foods, they might uncover clues that could help her.

At the feeding clinic, a child psychiatrist, physician and nutritionist observed and evaluated Alivia to determine whether she had problems swallowing, or if there were other psychological or developmental reasons behind her food avoidance.

The clinic determined Alivia had no physical or emotional barriers preventing her from eating solid food. She just didn’t want to.

“It was more of an age issue for her," Elisabeth explains. "She just wasn’t picking it up as fast.”

Alivia’s parents began introducing foods to her diet slowly, under the guidance of Dr. Brown-Whitehorn and Amy Dean, MPH, RD, a clinical dietitian at CHOP. The pair closely monitored the toddler for any allergic response.

Food protein-induced enterocolitis syndrome (FPIES) is a rare food allergy that affects the gastrointestinal tract. Learn about how the condition is diagnosed and treated at Children's Hospital of Philadelphia.

For example, Elisabeth ate eggs while breastfeeding and her daughter didn't have a negative reaction. But when eggs were introduced directly into Alivia's diet, she exhibited classic symptoms of a rare food allergy called food protein-induced enterocolitis syndrome (FPIES).

FPIES affects infants and young children. Classic symptoms of the disorder include severe vomiting, diarrhea and lethargy within a few hours of ingesting the trigger foods. Any food can trigger a negative reaction in a child who's allergic.

While babies can have sensitivities to foods they ingest for the first time through their mother’s breast milk, acute FPIES symptoms typically arise when children eat and digest food for the first time on their own — and the reaction is more severe.

“When Dr. Brown-Whitehorn mentioned FPIES, I thought ‘oh my word,’ what are we going to do?” explains Elisabeth. “Our family doctor had never heard about it. No one knows what this is."

FPIES can be mistaken for a stomach bug and is often misdiagnosed. The disorder can be challenging to diagnose because symptoms can occur hours after eating. Some infants outgrow the condition by age 3.

“Coming to CHOP, seeing Dr. Brown and using the clinic, we felt like we were not alone. That was huge for us — to have somewhere where we can go and we can get help. CHOP is our backup.”

Dietitian Amy Dean provided the family with recommendations as they navigated expanding Alivia’s diet with nutritious food and figuring out an appropriate meal and snack pattern. While Alivia was still breastfeeding and had limited solid food, Amy helped the family meet her needs with a multivitamin and beverage mixture.

Once Alivia's weight stabilized, her family began to trial new foods — under supervision — to Alivia’s diet. “We introduced wheat under observation," Elisabeth says.

The family also accidentally discovered Alivia could digest cow’s milk when they grabbed the wrong container of yogurt at the store. “We called Dr. Brown immediately, and stayed up watching her for hours after that happened," Elisabeth said. "But she was fine.”

Alivia is now a happy toddler. Her weight is within normal limits and she is thriving developmentally. She's come a long way from being a sickly infant. Today, she's quick to laugh, has an endearing stubborn streak and loves to speak her mind.

When asked what her favorite foods are, she responds quickly and with conviction: "Raisins and steak!"

For now, Alivia continues to avoid oats, soy, eggs and rice. Her parents hope to begin introducing eggs and oats to her diet soon, but plan to take that step under clinical observation in the Food Challenge Unit at CHOP in case Alivia has a severe allergic response.

Alivia and her two siblings, Ethan and Adelaide, return to CHOP every three months for checkups with Dr. Brown-Whitehorn. The trio adore Dr. Brown-Whitehorn and all the nurses at her office, so much so, that they don't complain when they must go to the hospital for tests.

“We are just in awe of CHOP. Other hospitals we've been at haven't helped us the way CHOP has.”